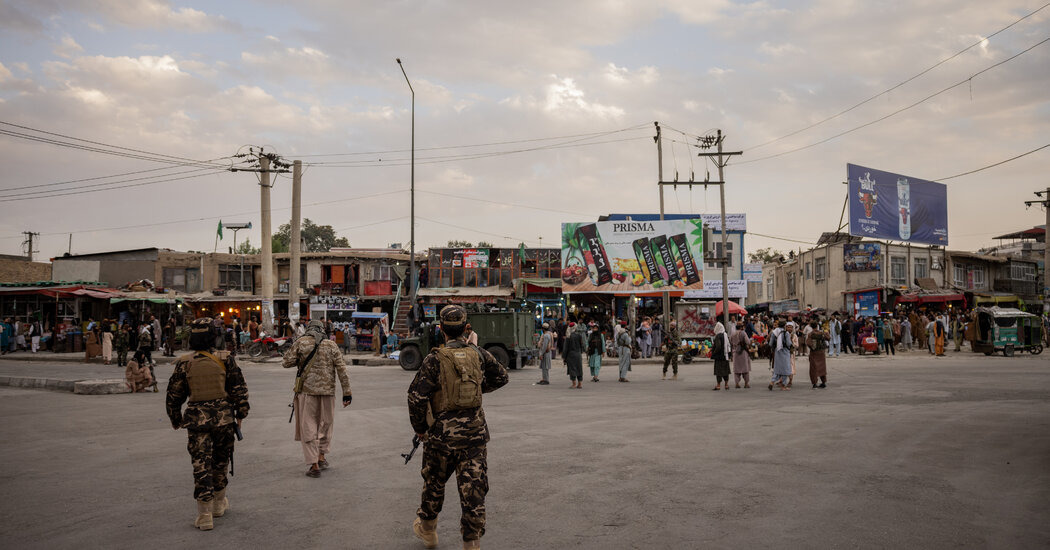 Ahmad, 27, lingered in bed. He did not want to face the day. His sister Haanya, 20, had no appetite for breakfast. She looked out the window, where four Taliban fighters were patrolling the block, AK-47 rifles swung over their shoulders.

It was Tuesday morning in Kabul, a day after the United States completed its military withdrawal, and there was no doubt who was in charge now.

In telephone interviews, the two siblings recounted what their lives looked like on Day 1 of Taliban rule, after two decades of U.S. occupation. Like many ordinary Afghans, they were already trying to learn how to navigate the new Afghanistan.

“Our life just two weeks ago seems 10 years away,” Ahmad said. “For 20 years the U.S. lied to us and said: ‘We are with you. We will not leave the Afghan people.’ Who is with us now? Only the Taliban.”

Just two weeks ago, before the Taliban entered the capital, Ahmad was a government employee. He lost his job and access to his government bank account with his savings. His wife had a miscarriage.

Haanya, a freelance journalist, used to roam cafes freely and talked to strangers for her stories. Now, her story pitches are turned down, and she hasn’t left the house in 10 days. Worried about Taliban harassment, her father will let her go outside only with a male relative.

On Tuesday morning, Ahmad ventured out with two friends. Shops were open and traffic flowed. The crowds that recently mobbed the airport in hopes of leaving the country were gone.

But the Taliban made their presence known with checkpoints at roundabouts. Few women were out alone on the street. A friend drove Ahmad to three bank branches in search of cash, but he gave up after seeing lines that stretched for blocks.

When they headed toward a friend’s house in a neighborhood where a prominent politician has a home, they found that Taliban fighters had blocked access to the road. They parked the car and walked to their friend’s house, where they drank tea and discussed potential exit plans.

Applying for visa to India? Attempting to cross the border into Pakistan? Joining the resistance in Panjshir?

There were no good options.

Later, Ahmad said, the Taliban stopped them at two checkpoints on their way to dinner, and asked them where they were going, where they lived and where they worked.

Stuck at home, Haanya texted Ahmad every hour, pressing him for details about what Kabul looked like now.

Other friends texted him with similar questions: “Who is out? What’s the situation in the city?”

At a nearly empty restaurant, Ahmad took a photograph of his sandwich and his soda and sent it to his friends, asking them to join him. “I didn’t tell them about the waves of emotion hitting me up and down all day,” Ahmad said.

Haanya was restless. She looked out the window. She checked her messages on her phone. She wandered from room to room.

“I am in my house, and I feel like I have no home,” she said. “I miss the little things I used to do that I can never do again: go to a bookstore alone, sit in a cafe and talk to people.”

She posted an essay she wrote in Dari to a private group for friends. “After 20 years of war and bloodshed, the war did not end,” it began. “Everything returned to 20 years ago and we are back at square one.”

By early evening Ahmad was back. A friend called him and said she had lost her job. They cried on the phone together.

They heard President Biden was giving a speech. He was announcing the end of the long war in Afghanistan — or, at least, America’s part in it.

Neither brother nor sister wanted to hear it.

What could he possibly say, wondered Haanya, that would make any difference for Afghans like them now?

The cheapest properties up for sale right now in Cardiff

Nia Sharma was approached for Manikarnika