A new generation car coming from Maruti Suzuki has taken more than 2 years, and now that it’s launched it has big shoes to fill because the previous gen of the Celerio sold more than 5.9 lakh units in the country and boasted of a 20% market share in the hatchback segment, and that’s significant because it shows how popular it was! So when Maruti Suzuki thought of bringing in a new gen model, the Celerio then was a no brainer.

The new Celerio is longer, wider but shorter than the outgoing model and is now based on the 5th generation of the Heartect platform. As you can see from its looks, it is designed to be more youthful and the design brings out a 3D effect. The move away from the squarish look works in its favour and you see these nice looking headlamps and the single chrome line on the grille. It’s simple and gives it a smiling face and we are glad the chrome isn’t overdone. There are no LED DRLs here so well we think it’s a miss but it’s not a deal breaker 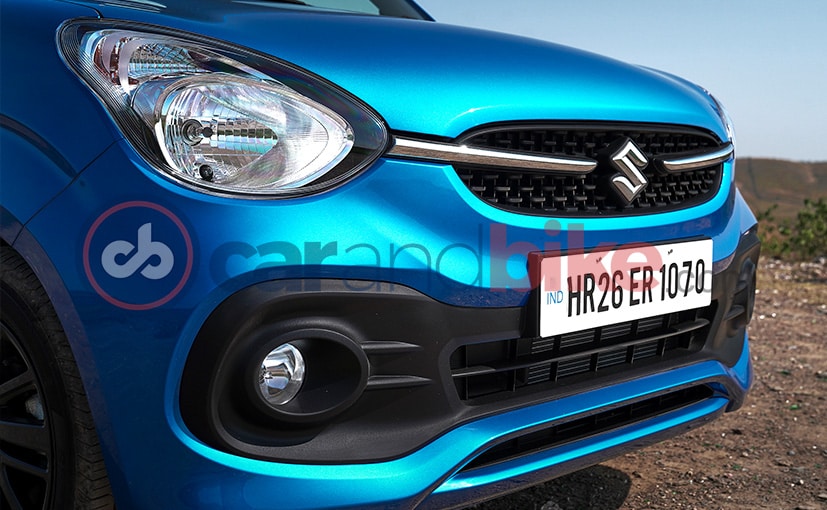 The Celerio does not get LED DRLs

View it in profile and you’ll notice the increase in length but you also see the tall boy stance and those 15 inch tyres do add to that appearance. 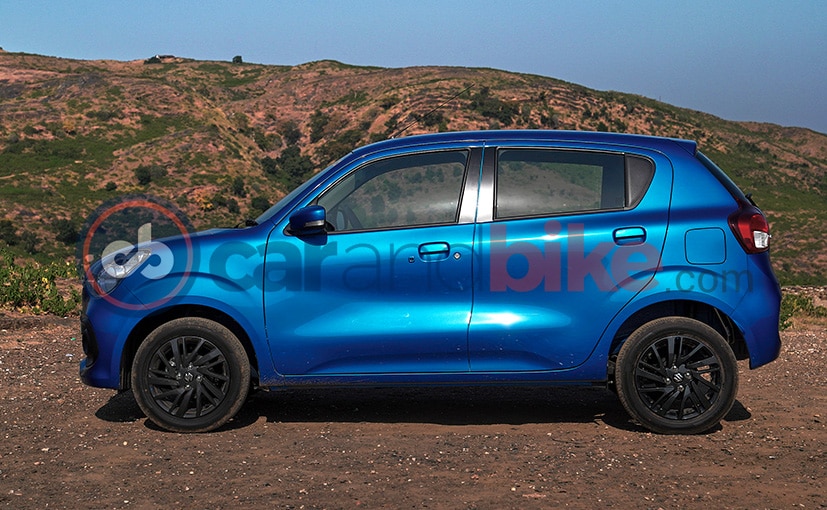 The Celerio gets the tall boy stance

Now the base model gets 14 inchers and the alloy wheels that you see here are only available in the top-end variant. 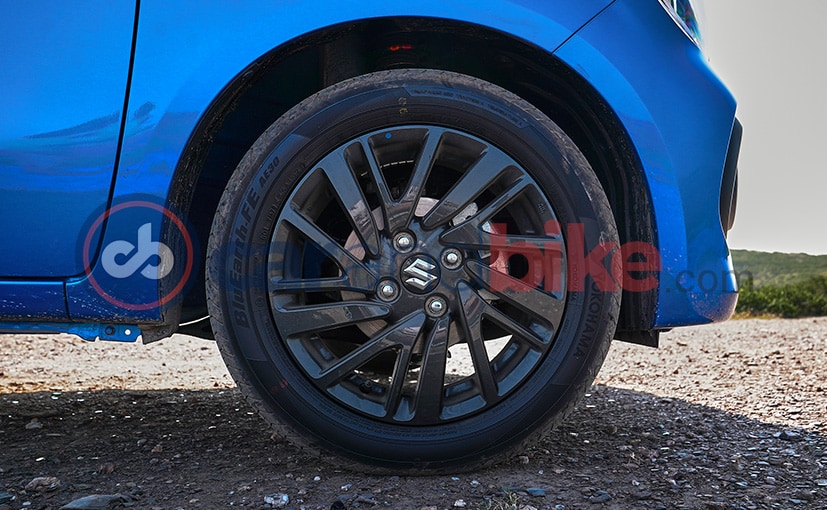 The rear gets droplet-styled taillights which are proportionate to the car, they’re not too big or small and complete the look of the car.

It’s a more contemporary dashboard and very refreshing. It’s a completely new design with some stuff that has been borrowed from some of its cousins. The steering wheel and the instrument cluster for example comes from the Wagon R while the placement of the power windows on the centre console is something that we’ve seen on the S-Presso. But it’s the 7-inch infotainment system that immediately grabs your attention. 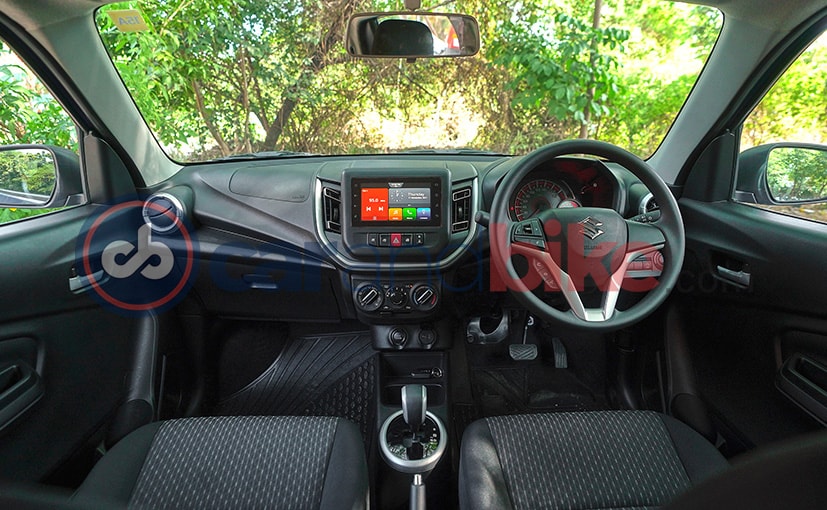 The top-end version gets this 7inch touchscreen system. There’s apple carplay and android auto, yes wired, let’s not ask for too much now! The seats are well bolstered too somewhat similar to what we’ve seen in the ignis in fact.

But is there enough space at the back?

The wheelbase has been increased by 10 mm and now is 2435 mm. So there’s decent space back here. No real amenities as such for rear seat passengers except for this bottle holder and maybe the phone holder. There are no charging points here. But you do get good shoulder room because remember it’s a wider car than before and good headroom as well. We would have loved to have adjustable headrests back here and even the front because frankly the Wagon R gets it and it’s priced lower than this one for now! 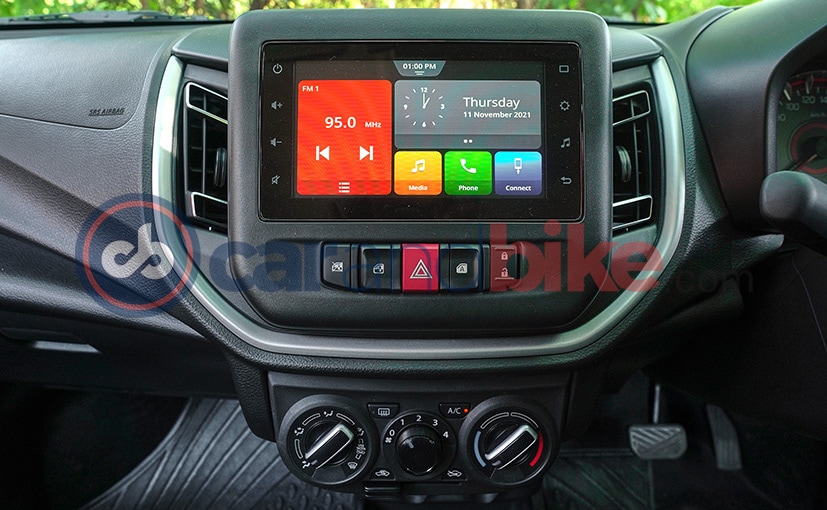 There’s one more aspect that needs a mention here and that’s boot space. It has increased by quite a margin 40% to be exact. 313 litres of space now available here and I’ll put things into perspective for you. The Swift gets 268 litres while the direct rivals to this car the Tiago offers 242 litres and the Santro provides 235 litres of space for your luggage. 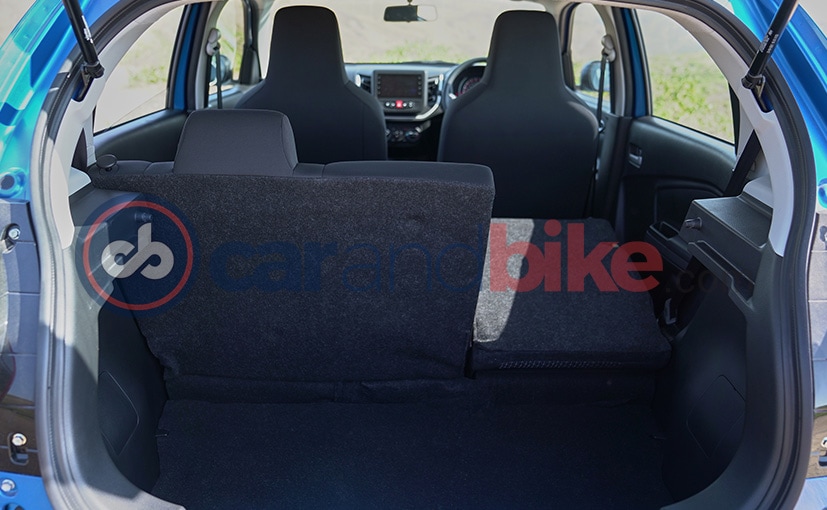 There’s 313 litres of bootspace on offer and the rear seats get a 60:40 split arrangement

But now let’s get to the business end of things the all important question. How does it drive?

It’s well powered for a car its size. 66 bhp and 89 Nm. Now I am driving the AMT variant first and it isn’t peppy but once the needle crosses the 2200 rpm mark then there’s a good amount of push. But it’s when overtaking when you really need to think about your move because it takes a few seconds to react to your input. It was never meant to be sporty and I don’t want it to be either just quick reaction times that’s all, but the big USP here is that it’s the most fuel efficient petrol car in the country and with a fuel economy of 26.68 kmpl on the AGS version, there’s more than what meets the eye. 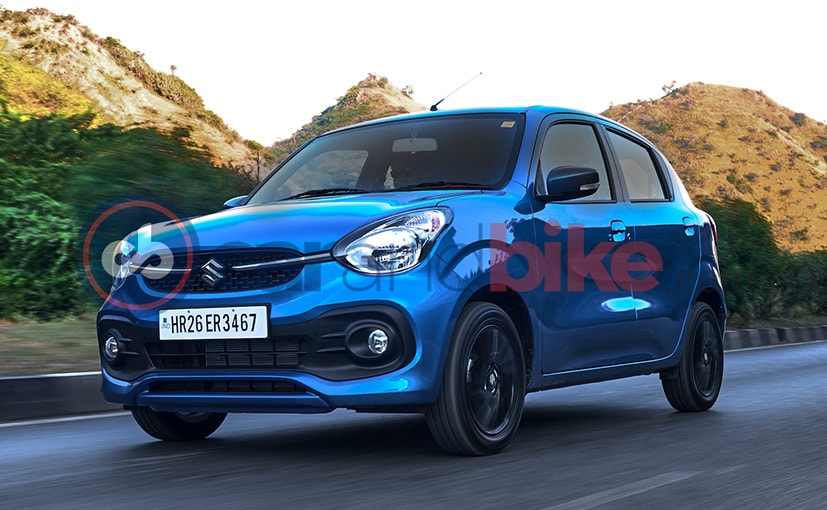 This next gen K Series engine is equipped with the dual valve timing, dual injectors and cooled exhaust gas recirculation system. While the cooled EGR helps increase knocking resistance which basically means that the fuel ignition is controlled and only the required amount is burnt for propulsion, the dual injectors help with better automization of fuel

The Dual VVT reduces the pumping loss and thus these pillars help increase the fuel efficiency of the Celerio. Of course, while all these techniques are very mechanical in nature, the one that the consumer will notice is the idle start stop and that’s standard on the Celerio. 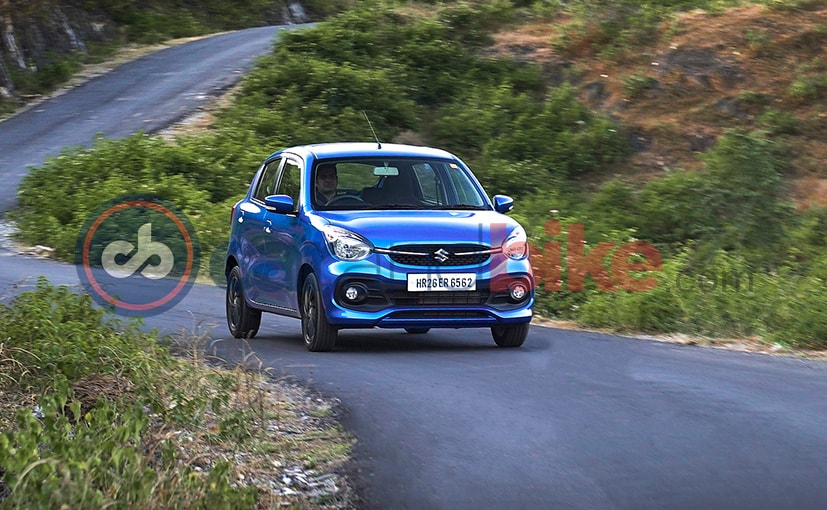 Now the automated manual transmission variant gets hill hold assist too and on these mountain climbs it did prove to be very effective and yes it is standard on the AMT variant.

But now let’s get to the manual transmission variant. 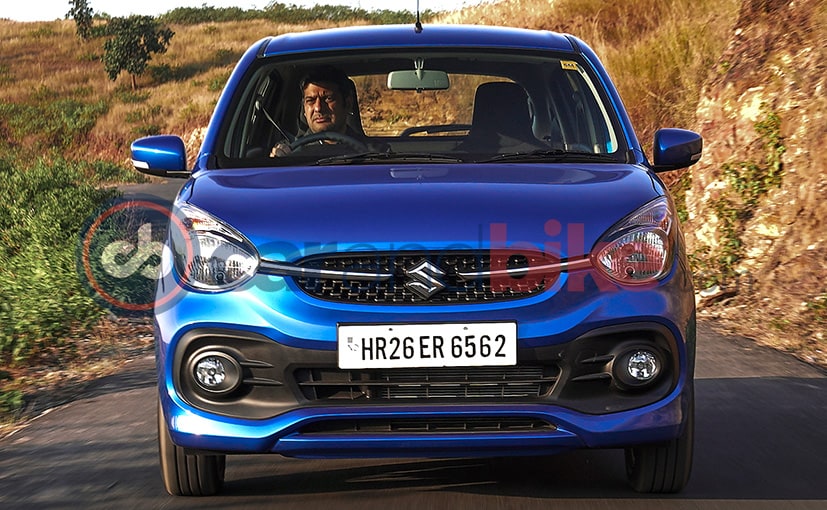 The manual is great to drive because the clutch is light and the travel is less. Then there is the gearbox itself which has short throws and you get an immediate response from the engine when you upshift or downshift. This too gives a mileage of more than 24 kmpl.

The Celerio really deals with broken roads pretty well. There is a bit of lateral movement in the cabin when going through a deep pothole, but the Celerio really puts on a good show maintaining its composure on all road surfaces. It’s a big big plus in my book. 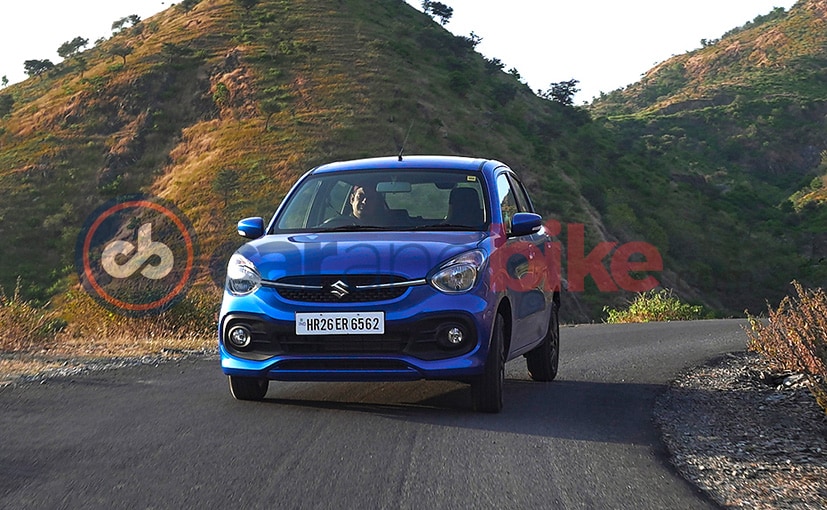 The steering too has a good weight too it. It’s not artificial and yes very likeable and then there’s the turning radius which shows how nifty and easy it is to drive the Celerio on crammed city roads.

Now a lot of you’ll might ask us what the crash test ratings are and the simple answer is, it does not have any yet because it hasn’t been crash tested by a global safety watchdog yet. Maruti Suzuki says that the car caters to all the safety requirements mandated by the Government of India and well that’s that. But there are standard safety features on the car like dual airbags, ABS with EBD, seatbelt pretensioners among others as part of standard equipment. We still feel that more could have been done in this department for sure.

On the price front the Celerio is mostly at par with rivals like the Tata Tiago and Hyundai Santro. It’s only the Datsun GO that is close to a lakh cheaper across variants.

The new-gen Celerio charms you with the space, engine refinement and even the ride quality it has to offer, and even the price in fact because it is very competitive. But does it go the extra mile to convince you that it’s the one to go for. From where I stand not really, because more could have been done, especially on the safety and features front. 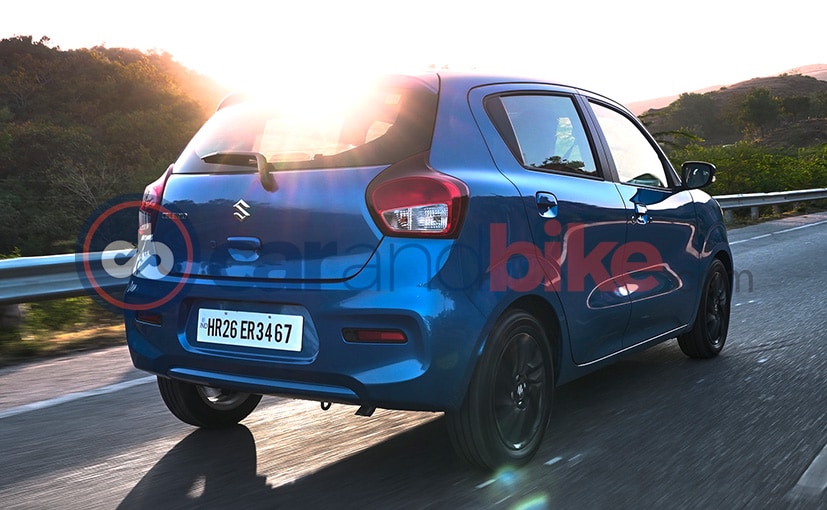 The Celerio is very competitively priced when compared to rivals

However, whatever we say, the Celerio will still sell by the dozens and that’s because of the value offering it has, may it be in the service department or brand equity.