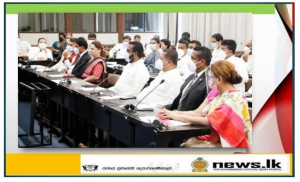 Minister of Youth and Sports and Development Co-ordination and Monitoring and State Minister of Digital Technology and Enterprise Development Namal Rajapaksa,
was elected as the President of Sri Lanka – France Parliamentary Friendship Association at the revival meeting of the association for the ninth Parliament held yesterday (06).

The meeting was held under the patronage of Hon. Speaker Mahinda Yapa Abeywardena. Ambassador of France to Sri Lanka H.E Eric Lavertu participated in the
meeting as the special guest and Secretary General of Parliament Dhammika Dasanayake was also present.

Addressing the meeting, the Hon. Speaker said that France has a long and strong relationship with Sri Lanka as one the first European countries to establish formal diplomatic relations following independence. He pointed out that both countries are committed to the Action Plan of the Paris Agreement on Climate Change. Hon. Speaker extended his gratitude to France for providing the continues assistance towards the development of Sri Lanka. “In terms of development assistance, the French Government has been a generous bilateral development partner. Even after Sri Lanka was listed as upper middle-income country, the French Development Agency (AFD) continues to provide development assistance to Sri Lanka” he added.

Ambassador of France to Sri Lanka H.E Eric Lavertu said that France was a country with strong bilateral ties for a long time and was committed to a number of projects for the development of Sri Lanka and hoped to further strengthen that cooperation.

Speaking on the occasion, newly elected President of the Sri Lanka-France Parliamentary Friendship Association Minister Namal Rajapaksa, said that he expects to further enhance the economic, social and cultural friendship between France and Sri Lanka under his chairmanship. The Minister pointed out that the country attracts a large number of French tourists in particular and hopes to strengthen Sri Lanka- France bilateral relations for the development of a number of sectors, including the tourism industry.

Several Ministers, State Ministers and Parliamentarians were present at the meeting.

Energy crunch: Russia could reap windfalls as other nations reel