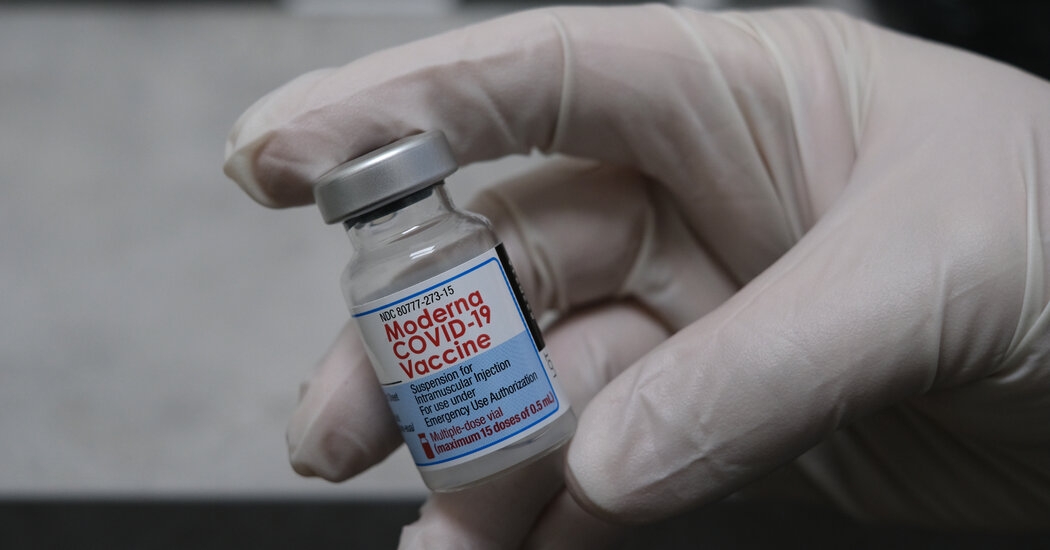 In documents released Tuesday morning, Moderna argued that the Food and Drug Administration should authorize a half-dose of its coronavirus vaccine as a booster shot for recipients at least six months after the second dose, citing evidence that the vaccine’s potency against infection wanes over time. The agency noted in its own analysis that, overall, available data show Moderna and the other vaccines “still afford protection against severe Covid-19 disease and death in the United States.”

Moderna cited the rate of breakthrough infections, “real world evidence of reduced effectiveness against the Delta variant,” and falling levels of neutralizing antibodies from its vaccine six to eight months after a second dose. The company said its clinical trial studies showed that a third injection boosted antibody levels — one measure of the immune system’s response — higher than what they had been before the second dose.

The documents were released by the F.D.A. ahead of a two-day meeting of the agency’s advisory committee, scheduled for Thursday and Friday. In its own briefing document for the committee, also released Tuesday, the F.D.A. summarized the data without taking a position.

The committee is expected to vote on whether to recommend emergency authorization of boosters of Moderna’s and Johnson & Johnson’s vaccines. While the panel’s votes are not binding, regulators typically follow them.

Moderna did not try to argue that its vaccine is waning now against severe disease or hospitalization, and the existing data does not appear to support that claim. That distinguishes Moderna’s application from Pfizer-BioNTech’s last month.

In its document, the F.D.A. said: “Some real world effectiveness studies have suggested declining efficacy of Moderna Covid-19 vaccine over time against symptomatic infection or against the Delta variant, while others have not.”

The agency said “there are many potentially relevant studies” and it has not independently reviewed the underlying data or conclusions of each one.

The F.D.A. and the Centers for Disease Control and Prevention decided to authorize boosters for many but not all Pfizer-BioNTech vaccine recipients. The eligible include those 65 or older, who live in long-term care facilities, have underlying medical conditions or are at higher risk of exposure to the virus because of their jobs or institutional settings. The last group includes health care workers, teachers and prisoners.

In the document released Tuesday, the F.D.A. proposed the outside experts consider essentially the same eligibility groups for Moderna recipients. But people familiar with the deliberations said that federal officials may also ask the committee to consider broadening eligibility for boosters of both vaccines to include more middle-aged people.

Moderna said it compared using a full dose and a half dose as a booster, and found that a half dose boosted antibody levels well with lower risks of adverse side effects. It also tried to make a point about conserving limited supplies, saying a half-dose “would result in a substantial increase in the world wide supply” of its vaccine.

Several independent studies have tried to estimate how long Moderna’s two-dose vaccine remains effective against mild, moderate and severe Covid. One looked at Covid cases last summer among more than 15,000 volunteers in Moderna’s clinical trial, some of whom had been vaccinated a full year earlier. Researchers compared Covid cases in July and August among trial participants who had been fully vaccinated between July and October 2020 with cases among those who were fully vaccinated between December 2020 and March 2021.

Those who got vaccinated later had a 36 percent lower rate of disease. But Dr. Hana M. El Sahly, a professor of molecular virology at Baylor College of Medicine and one of the lead researchers, said the study did not find a statistically significant difference between the two groups in cases of severe Covid — of which there were only 19.

Overall, she said, “the findings do not indicate that a booster is needed.” The study was backed by the National Institutes of Health, researchers said.

Another recent C.D.C. study reviewed case files of nearly 3,700 patients in 21 different hospitals from March to August. Researchers found that of the three vaccines available in the United States, Moderna’s vaccine held up best over six months.

What to Know About Covid-19 Booster Shots

The F.D.A. authorized booster shots for a select group of people who received their second doses of the Pfizer-BioNTech vaccine at least six months ago. That group includes: Pfizer recipients who are 65 or older or who live in long-term care facilities; adults who are at high risk of severe Covid-19 because of an underlying medical condition; health care workers and others whose jobs put them at risk. People with weakened immune systems are eligible for a third dose of either Pfizer or Moderna four weeks after the second shot.

The C.D.C. has said the conditions that qualify a person for a booster shot include: hypertension and heart disease; diabetes or obesity; cancer or blood disorders; weakened immune system; chronic lung, kidney or liver disease; dementia and certain disabilities. Pregnant women and current and former smokers are also eligible.

It is not recommended. For now, Pfizer vaccine recipients are advised to get a Pfizer booster shot, and Moderna and Johnson & Johnson recipients should wait until booster doses from those manufacturers are approved.

Yes. The C.D.C. says the Covid vaccine may be administered without regard to the timing of other vaccines, and many pharmacy sites are allowing people to schedule a flu shot at the same time as a booster dose.

The researchers said that Moderna was 93 percent effective against hospitalization, compared with 88 percent for Pfizer and 71 percent for Johnson & Johnson. Pfizer’s efficacy dropped significantly after four months, to 77 percent, while Moderna’s basically held steady, they said.

Given the dearth of data showing that Moderna’s protection weakens against severe disease, the committee’s deliberations about boosters for Moderna recipients will likely revolve around other key questions.

First, is there a need to “harmonize” U.S. booster strategy, making recipients of all three vaccines eligible even if they keep their potency for different periods of time? Some federal officials argue that with many Pfizer recipients already receiving boosters, the answer is yes.

“We’re in this very complicated situation right now: People are going into pharmacies or places where vaccines are available and saying, ‘I want my third dose of Moderna, or I want my second dose of J.&J.,” said Dr. H. Cody Meissner, an infectious disease expert at Tufts Medical Center who serves on the F.D.A. panel. “I don’t think anyone has much doubt that we will need a booster dose for these vaccines. What we don’t know is: How urgent is the need?”

Another question is whether Moderna will eventually wane against severe disease. Some booster advocates argue that Moderna is following the same path as Pfizer’s vaccine, just more slowly, because its initial dosage is significantly stronger and the interval between the first two shots is longer.

Committee members are also expected to debate whether Moderna recipients should be given a booster simply to protect them against the risk of mild or moderate disease, or to try to disrupt transmission of the virus.

“The fundamental issue is, what are we trying to do?” said Dr. El Sahly. “Both Moderna and Pfizer seem to have waned when it comes to mild to moderate disease, especially with the Delta variant.

“So, if that’s the goal, a booster is needed. If we want to prevent only severe disease that lands people in the hospital, that’s a different mathematics.”