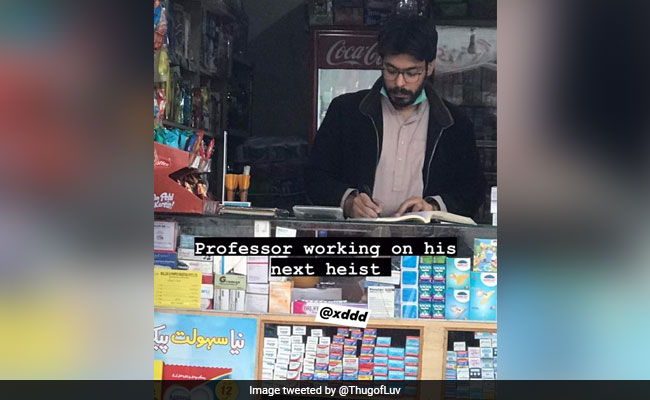 What’s the hot topic of the week? Money Heist, of course. After much anticipation by fans across the globe, the newest season of the Netflix web series was aired last week. Fans are excited, to say the least. However, there’s something more that has added to the fun of watching this thriller. Some eagle-eyed fans have spotted a lookalike of the show’s lead character, the Professor, at a store in Pakistan. Photos show the doppelganger working at a local store. Given his facial features and eyeglasses, he looks quite similar to the Professor, a role played by Spanish actor Alvaro Morte.

A user named Malaika shared the photo on Twitter this Sunday. What do we see? The Professor’s lookalike is busy at his store, scribbling on a notebook. The somber look reminds us of the Professor’s expressions when he plans mind-boggling heists and escapes in Money Heist. The user took inspiration from the show’s original title, La Casa De Papel, and wrote, “La casa do pattay dispirin.” The hashtag ‘Money Heist‘ left no doubt about the reference.

The post received a lot of comments, with many dropping heaps of laughing emojis.

Another user  added his take on the photo. The Twitter user wrote, “Professor’s Pakistani connection.” If that wasn’t enough to amuse Money Heist fans, the user went a step further and wrote, “Professor working on his next heist.” Given the show’s twists and turns, the user’s remark uncannily flares up our imagination.

Here are a few more reactions:

The craze for Netflix show Money Heist has taken over the world, Pakistan being no exception. The Professor’s lookalike, a grocery seller has been found in a Pakistani store. Via #Twitterpic.twitter.com/rEHOgVYKZG

Interestingly, in the show, the Professor does contact Pakistan during a heist. One of the fans of Money Heist even made a reference to that in another tweet.

Whenever The professor Is In Trouble. He says “Contact Pakistan”.
Proud Moment For Pakistanis ????????#MoneyHeistpic.twitter.com/0ICCBwU1NU

Money Heist has a huge fanbase in the subcontinent. When a group of Pakistani hackers was introduced in a scene in one of the seasons, fans were elated. One of the roles was played by Indian actor Ajay Jethi.

Earlier this year, fans had found a lookalike of the Professor in Indian cricketer Virat Kohli — his beard, hairstyle, and statement glasses sealed the similarities. Some said the Indian captain’s look was inspired by Alvaro Morte’s role. Others were simply taken aback at the striking resemblance.

Money Heist Season 5 has been divided into two parts. One was released last week. The second part will be released in December.