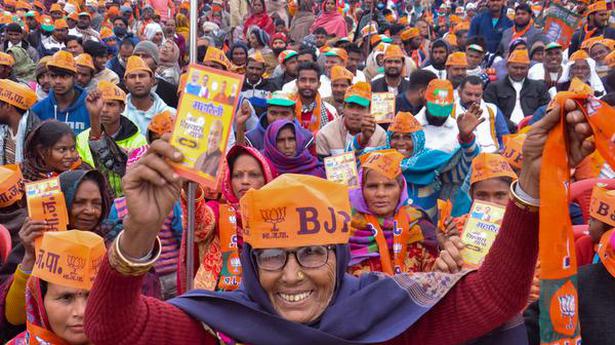 Political parties across the spectrum on Saturday welcomed the announcement of the poll schedule for the Assembly elections in Uttar Pradesh, Punjab, Uttarakhand, Manipur and Goa by the Election Commission of India (ECI).

As elections for five Assemblies start off with a ban on physical campaigning till January 15 in view of the COVID-19 pandemic, Election Commission officials said on Saturday the rules regarding the conduct and expenditure of conventional campaign would be applicable to virtual campaign events.

wo brothers who were engrossed in playing popular online game PUBG on their mobile phones while sitting on a railway track were run over by a train in Rajasthan’s Alwar district on Saturday, police said.

Saturday announced that he had applied for voluntary retirement (VRS) and plunged into politics with the BJP.

COVID vaccine maker Bharat Biotech has appealed to healthcare workers to be “highly vigilant and ensure that only Covaxin is administered to individuals in the 15-18 years age group”.

The Ministry of AYUSH has developed an Ayurvedic kit for increasing immunity to combat the variants of COVID-19, AYUSH Minister Sarbananda Sonowal said on Saturday.

Main accused in the Bulli Bai app case Niraj Bishnoi has tried to harm himself twice while in police custody but he is being taken care of, police officials said on Saturday.

In a partial relief for 1,086 employees of General Motors India who had been laid off in July 2021, the Industrial Court in Pune has directed the Indian unit of the American auto major to pay 50% of the monthly salary to each employee till final disposal of the case.

‘Masks not recommended for children 5 years & under’: Govt issues revised guidelines for kids

Chidambaram should resign if Cong fails to oust BJP in Goa: TMC

‘Masks not recommended for children 5 years & under’: Govt issues revised guidelines for kids

Chidambaram should resign if Cong fails to oust BJP in Goa: TMC