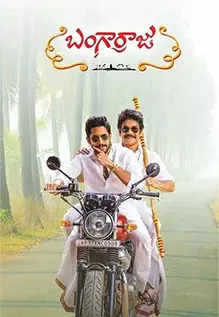 Story: Chinna Bangarraju is taking forward his grandfather Bangarraju’s legacy of being a massive flirt. His worried grandmother however wants to ensure he’s not lonely anymore before she passes on.

Review: With Bangarraju, Kalyan Krishna picks up where he left off with Soggade Chinni Nayana. While he attempts to connect the threads to both films, he forgets to inject some freshness in a done and dusted script. The film relies heavily on Akkineni fans’ excitement at seeing Nagarjuna and Naga Chaitanya together in one frame. But is that enough to make this the perfect Sankranthi watch?

Chinna Bangarraju (Naga Chaitanya) has grown up without his parents in the care of his grandmother Satyabhama (Ramya Krishnan). His father Ram Mohan (Nagarjuna) leaves him under her care and returns to the US after the demise of his wife Seetha (Lavanya Tripathi) in child-birth. Despite hailing from a family that is tasked with looking after the local temple, he grows up sharing a difficult relationship with God due to losing his loved ones early in life. Instead of looking after the village, he passes time by playing card games and antagonising Naga Lakshmi (Krithi Shetty), who is the sarpanch’s (Rao Ramesh) daughter. Satyabhama enlists her husband Bangarraju’s (Nagarjuna) help to help their grandson settle down, but little do they know what they will be helping him from danger too.

Bangarraju starts out well. There’s gems unearthed from underneath the temple. There’s also a snake that’s guarding the same structure. A priest has sinister foreboding. To no one’s surprise, Bangarraju is making merry with Rambha-Urvasi-Menaka in heaven instead of flirting his way through hell. Chinna Bangarraju is quirky; Naga Lakshmi is a manic pixie dream girl who’s painted out to be dumb just for a few laughs. Satyabhama is that grandma who cannot move on (literally) till she sees her grandson happy. Ram Mohan is back to doing what he does best – ignoring his family. Daksha Nagarkar, Meenakshi Dixit play cameos. It’s all high on drama, low on logic and laughs, yet compelling enough to make you want to sit through, thanks to colourful numbers.

But soon Kalyan Krishna tries to pull off twists that seem placed for the sake of it and introduce old characters (Sampath Raj) too late into the story by connecting them to new characters like Aadi (Padma Soorya), who begins to look lost after a while. He also begins to peel off the layers of Chinna Bangarraju but loses the plot midway through. The thread in Soggade Chinni Nayana is replaced by a ring and before you know it, Faria Abdullah is dancing to Vaasivaadi Tassadiyya which brings some relief. But then again if you’re looking forward to songs, is the story really all that engaging? Bangarraju begins to seem like an overtly long film that doesn’t really have anything new to tell. It just seems like old wine in a new bottle.

Nagarjuna brings an ease to his characters as always and shows more variation between Bangarraju and Ram Mohan than Naga Chaitanya does as Chinna Bangarraju, when he’s possessed by Bangarraju. Sure, the slow-motion shots that feature both the actors in one frame is cool and all, especially towards the fag end of the film, but maybe a little more humour would’ve saved the day. Krithi does well in a character that doesn’t really give her scope to perform. Ramya Krishnan is an absolute delight as always. Anup Rubens’ music is fun and fits well into the story. Cinematographer Yuvaraj also pulls off the visuals well. The weak VFX however is a let-down and doesn’t let you immerse well into the story.

All in all Bangarraju might take the story of Soggade Chinni Nayana forward, but the film pales in comparison to its predecessor. And that makes it a passable watch this Sankranthi.