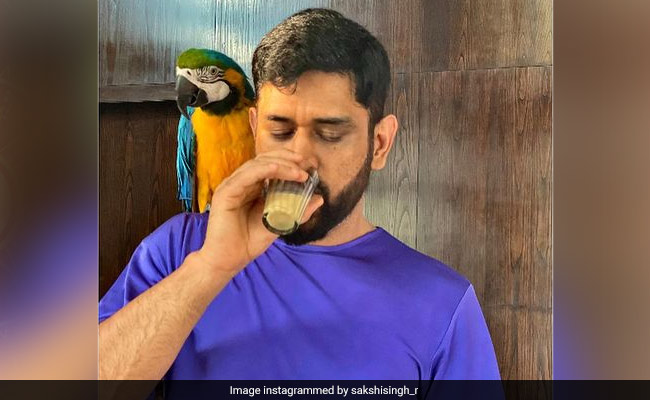 MS Dhoni was photographed enjoying a cup of tea with his pet macaw on his shoulder.

MS Dhoni had some unusual company during a recent “chai date” – the former India skipper was filmed enjoying a cup of tea with his pet macaw perched on his shoulder. Photos shared by wife Sakshi Dhoni yesterday shows MS Dhoni with “Honey” – his blue-and-yellow macaw. In the two pictures that were shared on Instagram, the 40-year-old cricketer was seen dressed in a blue T-shirt with his bird on his shoulder.

“‘Mahi’ and his ‘Honey’,” wrote Sakshi Dhoni while sharing the photos. She also added the hashtag #chaidates.

The pictures have racked up over 9.7 lakh ‘likes’ since being posted on the photo and video-sharing platform. In the comments section, fans of ‘Captain Cool’ thanked Sakshi Dhoni for sharing the pics.

MS Dhoni’s fondness for animals is well known. Besides Honey the macaw, he also has has several dogs who make frequent appearances on his and his wife’s Instagram accounts. Their sprawling Ranchi farmhouse is also home to a horse and a pony.

In June, Sakshi had shared a clip which showed the former India skipper playing with his Shetland pony.

Lizard Travels Over 7,000 Km From US To England By Hiding In Suitcase