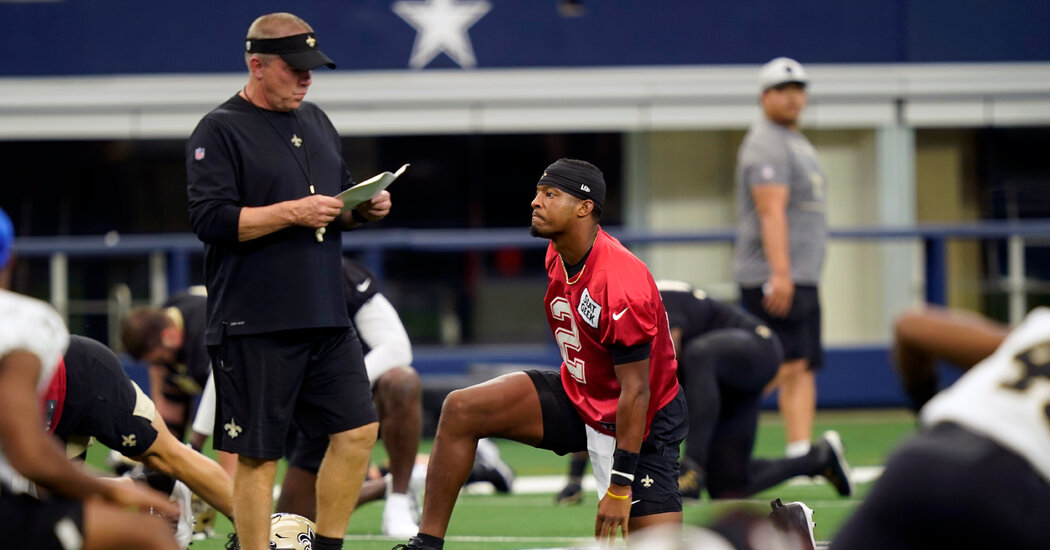 The Saints will open their season in Jacksonville, Fla., as New Orleans recovers from Hurricane Ida, the N.F.L. said on Wednesday.

The Saints will play the Green Bay Packers on Sept. 12, a Sunday, at TIAA Bank Field, home of the Jacksonville Jaguars.

Though the Superdome, the team’s stadium in New Orleans, did not suffer major damage when Hurricane Ida swept through the region, nearly a million customers in Louisiana were still without power days after the storm tore through the state, causing flooding and knocking out power lines. Entergy, Louisiana’s largest utility, said on Wednesday that it could be days before electricity was fully restored in New Orleans and other Louisiana cities hit by Ida.

Saints personnel and their families on Saturday relocated to North Texas before Ida’s arrival, holding practices at AT&T Stadium in Arlington, home of the Dallas Cowboys. Saints Coach Sean Payton said on Tuesday that the team would continue to train in the Dallas-Fort Worth area as New Orleans recovered from the storm. He said the region made sense because it had many Saints fans nearby, stadiums capable of hosting N.F.L. games and a major airport.

“We’ve got enough fans in this area and Houston, and certainly from northern Louisiana, that we think that would be something that’s very realistic,” Payton said.

The team moved practices to Texas Christian University in Fort Worth, which has an indoor field and other training facilities. Doug Miller, a team spokesman, said the Saints’ training facility in Metairie, La., just outside New Orleans, received only superficial damage in the storm, and the team has allowed officials from the Federal Emergency Management Agency, or FEMA, to use offices there.

The decision to move the Saints’ first regular-season game came two days after Tulane announced that it would move its college football matchup on Saturday against Oklahoma to Norman, Okla., from New Orleans.

By the time Tulane made its decision, the football team had evacuated to Birmingham, Ala., and seen its hopes for a Tuesday return to New Orleans dashed.

“Obviously, that was wishful thinking,” Willie Fritz, the Tulane coach, said at a news conference this week after his team fled rain in Birmingham and practiced in Tuscaloosa, Ala. “It’s a very unfortunate situation. We feel for the people in New Orleans.”

The university said Monday that it would decide in “the days ahead” how to handle planned home competitions in football and women’s volleyball. The football program is next scheduled to play in New Orleans on Sept. 11, while the volleyball team’s next home matches are scheduled for Sept. 17.

“We’re like the Terminator: You’ve got to just point us in the right direction and we will go there,” said Fritz, who added that Tulane officials had been able to get onto campus to pick up equipment, including the Green Wave’s uniforms and cleats.

The N.F.L. did not say whether future Saints home games would be moved. Their Week 2 and Week 3 matchups are road games. The Saints will play the Carolina Panthers in Charlotte, N.C., and then the New England Patriots in Foxborough, Mass.

The Saints’ second home game of the season is scheduled for Oct. 3 against the Giants.

In 2005, the Saints played their entire regular season on the road after the Superdome was damaged during Hurricane Katrina and the city’s residents were displaced. The team opened the season at the Giants in East Rutherford, N.J., and played its remaining games at the Alamodome in San Antonio and Tiger Stadium in Baton Rouge, home of the Louisiana State football team.

The moments that made the Ryder Cup

IPL: Rohit first batter to score over 1000 runs against one franchise