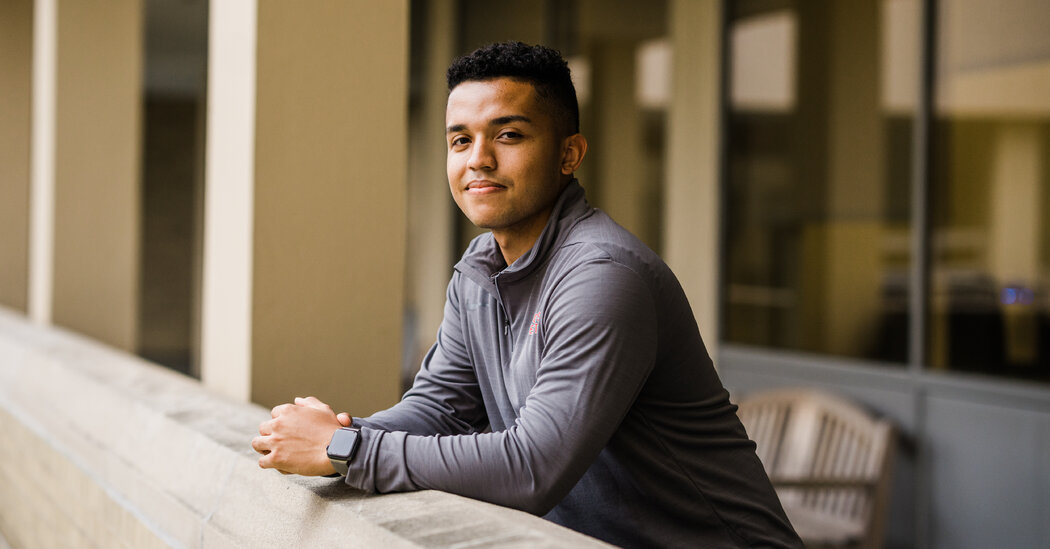 Ethan Burrell had spent a total of only six months attending on-campus classes at St. John’s University from his freshman year until this week, when he returned to start his junior year.

To get back to that in-person college experience on the Queens campus after more than a year of remote learning, he was happy to follow his school’s vaccine mandate.

Harsha Gupta, a rising sophomore at the Parsons School of Design at the New School, moved to New York from India in the spring and said she was eager to start learning in person. So she got vaccinated. Many of her other classmates have done the same, often posting about their vaccinations on social media.

“So many of us were just aching to get back to school,” said Noor Lima Boudakian, 20, a rising junior at the New School.

New York’s universities were among some of the first institutions in the nation to issue vaccination mandates, some as far back as in the spring, long before city agencies or many private companies did so and before the rise of the more contagious Delta variant. At the time, it was unclear how the general public would respond to such orders.

Now, as many colleges across the state begin classes this week in the midst of an uptick in cases in part because of Delta, schools have noticed a surprising trend: compliance. Few of the controversies and protests that have sprung up across the country in response to vaccine mandates in the workplace have been seen on New York’s college campuses.

“The same kind of division we’re seeing in the country, we’re not seeing in the college population,” said Arthur Caplan, a New York University bioethicist who studies vaccine hesitancy in young people.

Even without a vaccine mandate, Dr. Caplan said, college students would most likely still have gotten the shot in large numbers simply out of a desire to have a safe on-campus experience.

Many students said in interviews that the widespread acceptance of vaccine requirements has been driven by the pain of missing out on growth and newfound independence during the pandemic.

“I think for any prospective students who are looking at coming back to New York City and in-person activities in general, it’s definitely viewed as a path forward,” said Mira Silveira, 21, a rising senior at New York University.

More than 100 New York colleges have a mandate in place, according to a tracker from The Chronicle of Higher Education. Many of these universities said that more than 80 percent of their student body were partially or fully vaccinated as of mid-August. In many cases, the rate is higher than the general vaccination rate for college-age people in the state. In New York, about 64 percent of people between the ages of 16 to 25 have received at least one dose of the vaccine, according to state statistics.

“Mostly, students just want to be back,” said Jim Malatras, chancellor for the State University of New York system. He added: “The enthusiasm and energy is actually palpable on campus. I sense it in a way I’ve never sensed it before.”

The vaccine mandate at the City University of New York and at SUNY was announced in May by former Gov. Andrew M. Cuomo but did not become official until the Food and Drug Administration formally approved the Pfizer vaccine last week. All students must be fully vaccinated and submit proof of their status to attend in-person classes, unless they are granted medical or religious exemptions, with a grace period until late this month. The directive does not apply to faculty or staff, though unvaccinated employees may be subject to weekly testing.

But even before the vaccine mandate was formally put into place, SUNY students were getting the shot. According to a spokeswoman for SUNY Oneonta, which had one of the worst virus outbreaks of any college in New York State last fall, 88 percent of the campus’s residential and off campus students had received at least one dose of the vaccine as of late August (77 percent were fully vaccinated). Numbers for the entire system won’t be available until students have had time to catch up with the new mandate, said a spokeswoman for SUNY.

Ms. Lima Boudakian said she and her friends worried that there would be logistical challenges in vaccination, especially for international students. But her college, the New School, allowed international students an eight-day grace period after arriving in New York, to Ms. Lima Boudakian’s relief. The New School required all of its students, faculty and staff to be fully vaccinated or request an exemption in order to be on campus, with deadlines in August.

“It felt like this was the first real sense of hope that we’d be back on campus,” she said.

Several students said they felt their schools had a highly effective vaccination information and mandate rollout.

“I think it’s a great model on a public health standard to look at,” Nikolas Pham, a rising senior at Vassar College, said of his school’s vaccine policy.

The only significant source of hesitancy Mr. Malatras said has heard about has been at some of SUNY’s community colleges, where some parents were not allowing their children to be vaccinated before the start of classes, he said. But at one community college he recently visited, Mr. Malatras said that students had signed up to get vaccinated once they arrived on campus.

Despite what appears to be the successful implementation of vaccine mandates, complaints have surfaced at some universities about additional precautions such as mask mandates and temperature testing. At SUNY Binghamton, students have pushed back on these measures with memes, which often mock the administration’s decisions.

Understand Vaccine and Mask Mandates in the U.S.

One such Instagram post from August, showing a water polo player spraying water on himself while swimming in a pool, was used to mock a mask mandate on top of a vaccine mandate. In the comments, some students sounded off against the administration. “I just want a normal semester,” one person wrote.

Colleges in the state are mixed on mask mandates, although many require students and employees to wear a mask indoors regardless of vaccination status. Students on campus at Cornell University, Columbia University and CUNY must wear a mask, while St. John’s University allows those who are fully vaccinated to go unmasked indoors. In August, Vassar mandated wearing masks indoors, except for private settings.

Pushback has risen at universities in other states, including Rutgers University in New Jersey, where several students have filed a lawsuit against the college for its vaccine mandate. On Aug. 25, a student on the football team announced he would be transferring over the order.

Jordan Tralins, 20, a rising junior at Cornell University, where vaccination is required for students but not for staff, founded the Covid Campus Coalition to help universities across the country use social media to debunk vaccination myths and help students get the vaccine.

Ms. Tralins said that several smaller schools in upstate New York, such as Paul Smith’s College near Lake Placid, had reached out to her over the summer to ask for help in encouraging their students to get vaccinated.

In lieu of a mandate, Nicholas Hunt-Bull, provost of Paul Smith’s College, said the school will require students to either provide proof of full vaccination or a negative coronavirus test result taken within 72 hours of returning to campus. Masks will also be required indoors. The school has not yet set a policy for further testing for unvaccinated students.

The college is encouraging its students to get vaccinated, he said, but given the political orientation of the community, which is “overwhelmingly white and rural,” officials feared a mandate would push students away.

“We know that some of them or their families would have chosen not to come to college if we had a mandate. Then we would be denying those kids an opportunity to have an education,” Mr. Hunt-Bull said.

But he noted that even without a mandate in place, almost 70 percent of the college’s students had already submitted proof of full vaccination when classes started on Tuesday.

While it’s uncertain just how safe campuses will be because of Delta, many of New York’s college students said they’re just happy to be able to relax on campus with their friends again.

He’s happy the vaccine mandate was put in place.

“If that’s one step closer to normal college life, I’m all for it,” Mr. Burrell said.

What Sandra Day O’Connor Stood For on the Supreme Court