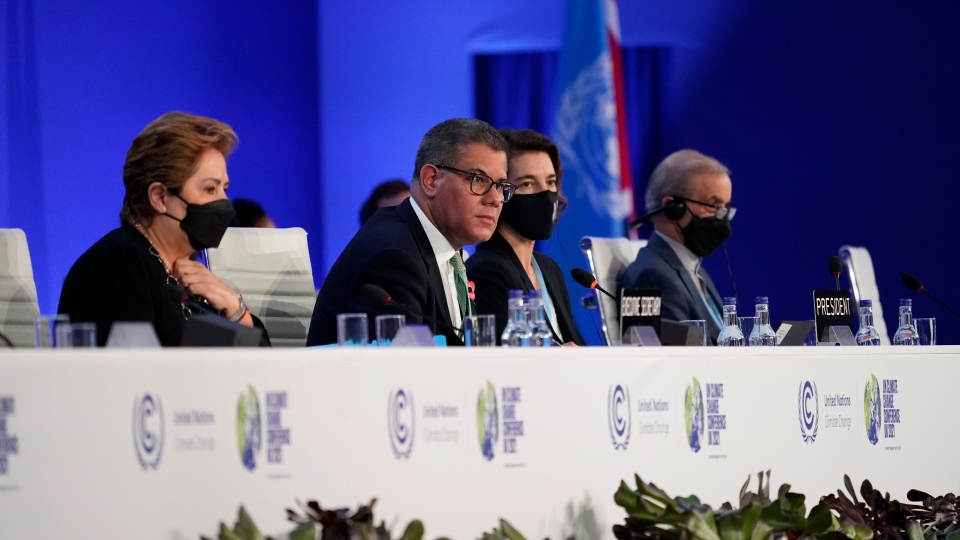 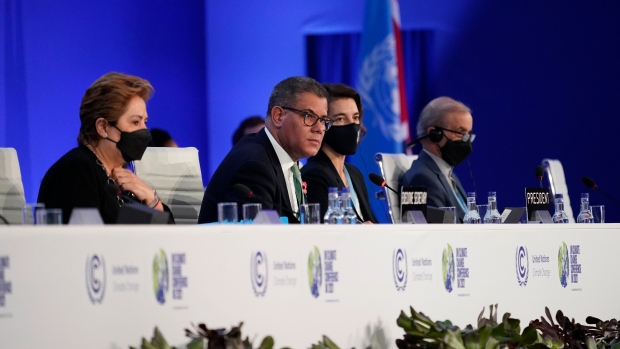 GLASGOW, SCOTLAND — Almost 200 nations accepted a contentious climate compromise Saturday aimed at keeping a key global warming target alive, but it contained a last-minute change that some high officials called a watering down of crucial language about coal.

Several countries, including small island states, said they were deeply disappointed by the change put forward by India to “phase down,” rather than “phase out” coal power, the single biggest source of greenhouse gas emissions.

Nation after nation had complained earlier on the final day of two weeks of UN climate talks in Glasgow, Scotland about how the deal isn’t enough, but they said it was better than nothing and provides incremental progress, if not success.

Negotiators from Switzerland and Mexico called the coal language change against the rules because it came so late. However, they said they had no choice but to hold their noses and go along with it.

Swiss environment minister Simonetta Sommaruga said the change will make it harder to achieve the international goal to limit warming to 1.5 C since pre-industrial times. Before the change on coal, negotiators had said the deal barely preserved that overarching. The world has already warmed 1.1 C.

“India’s last-minute change to the language to phase down but not phase out coal Is quite shocking,” Australian climate scientist Bill Hare, who tracks world emission pledges for the science-based Climate Action Tracker. “India has long been a blocker on climate action, but I have never seen it done so publicly.”

In addition to the revised coal language, the Glasgow Climate Pact includes enough financial incentives to almost satisfy poorer nations and solves a long-standing problem to pave the way for carbon trading.

The draft agreement says big carbon polluting nations have to come back and submit stronger emission cutting pledges by the end of 2022.

Conference President Alok Sharma said the deal drives “progress on coal, cars cash and trees” and is “something meaningful for our people and our planet.”

“It’s meek, it’s weak and the 1.5C goal is only just alive, but a signal has been sent that the era of coal is ending. And that matters,” Greenpeace International Executive Director Jennifer Morgan said.

GLASGOW, Scotland (AP) — Almost 200 nations were poised Saturday to adopt a compromise on how to curb climate change and to keep a key global warming target alive after 15 days of contentious climate talks.

During nearly three hours of discussions, nation after nation said the proposed agreement did not go far enough, but only India and Iran appeared inclined to object. Negotiators have started the traditional posing for photos signifying some kind of success.

The deal calls for an eventual end of some coal power and of fossil fuel subsidies. It also includes enough financial incentives to almost satisfy poorer nations that anticipate harms from climate change out of proportion with their roles in causing it.

Ahead of the talks in Glasgow, Scotland, the United Nations had set three criteria for success, and none of them were achieved. The U.N.’s criteria included pledges to cut carbon dioxide emissions in half by 2030, $100 billion in financial aid from rich nations to poor, and ensuring that half of that money went to helping the developing world adapt to the worst effects of climate change.

The draft agreement says big carbon polluting nations have to come back and submit stronger emission cutting pledges by the end of 2022.

A rich-poor divide widened at the U.N. summit in recent days, with developing nations complaining about not being heard. But when the representative from Guinea, speaking for 77 poorer nations and China, said his group could live with the general results, negotiators applauded.

The Chinese delegation also said it was fine with the positions that would come out of a Glasgow in a final conference agreement. But Indian Environment Minister Bhupender Yadav potentially threw a wrench when he argued against a provision on phasing out coal, saying that developing countries were “entitled to the responsible use of fossil fuels.”

Yadav blamed “unsustainable lifestyles and wasteful consumption patterns” in rich countries for causing global warming. It was unclear whether India would try to stop a potential deal. “Consensus remains elusive,” the minister said.

Iran said it supported India on not being so tough on fossil fuels.

“For heaven’s sake, don’t kill this moment,” Timmermans pleaded. “Please embrace this text so that we bring hope to the hearts of our children and grandchildren.”

Gabon’s delegation indicated it couldn’t leave Glasgow without “scaled up” and predictable assurances for more money to help poorer nations adapt to the worst effects of global warming. Kerry tried to assure Gabon’s representatives that the United States would redouble its efforts on adaptation finance.

Small island nations that are vulnerable to catastrophic effects of climate change and had pushed for bolder actions in Glasfow said they were satisfied with the spirit of compromise, if not outcome of the talks.

“Maldives accepts the incremental progress made in Glasgow,” Aminath Shauna, the island nation’s minister for environment, climate change and technology said. “I’d like to note that this progress is not in line with the urgency and scale with the problem at hand.”

Shauna noted that the latest provisions are not vigorous enough to limit warming to 1.5 degrees Celsius (2.7 degrees Fahrenheit) since pre-industrial times by the end of the century, which was the goal nations agreed to six years ago.

“The difference between 1.5 and 2 degrees is a death sentence for us,” Shauna said, noting that to stay within that range the world must cut carbon dioxide emissions essentially in half in 98 months.

Earlier Saturday, the negotiators in Glasgow pored over fresh proposals for sealing a deal that they hoped could be credibly said to advance worldwide efforts to tackle global warming.

The last-minute huddles focused on a potential loss-and-damage fund for poor nations hurt by climate change and forest credits in a carbon-trading market.

“I hope we can have some resolutions before formally starting this plenary,” conference president Alok Sharma, an official from host nation Britain, told negotiators. “Collectively this is a package that really moves things forward for everyone.”

Until late Saturday afternoon, divisions remained on the issue of financial support sought by poor countries for the disastrous impacts of climate change they will increasingly suffer in the future. The United States and the European Union, two of the world’s biggest historic emitters of greenhouse gases, continued to have deep reservations about the so-called “loss and damage” provisions.

Mohammed Quamrul Chowdhury of Bangladesh, a lead negotiator for less-developed countries, ticked off the ways that vague wording in a Saturday morning draft fell short of committing wealthier countries to putting new money on the table for countries struggling with climate damage.

Another issue that caused problems Saturday had confounded negotiators for six years: setting up carbon-trading markets. The idea is to trade credits for reducing carbon like other commodities, unleashing the power of markets, with poorer nations getting money, often from private companies, for measures that reduce carbon in the air.

Rich countries wanted to make sure that poor nations that sell their carbon-reduction credits don’t claim those actions in their national tallies of emission cuts, a process called double counting.

Before the areas of disagreement between rich and poor nations demanded urgent attention, coal had garnered more consideration.

A proposal for the overarching decision retains contentious language calling on countries to accelerate “efforts towards the phase-out of unabated coal power and inefficient fossil fuel subsidies.”

But in a new addition, the text says nations will recognize “the need for support towards a just transition” — a reference to calls from those working in the fossil fuel industry for financial support as they wind down jobs and businesses.

“Here in Glasgow, the world’s poorest countries are in danger of being lost from view, but the next few hours can and must change the course we are on,” Oxfam senior policy adviser Tracy Carty said. “What’s on the table is still not good enough.”

But the possibility of having fossil fuels explicitly mentioned for the first time in a decision coming out of the U.N.’s annual Conference of the Parties meeting, or COP, was well-received by some environmentalists.

In another proposal, countries are “encouraged” to submit new targets for emissions reduction for 2035 by 2025, and for 2040 by 2030, establishing a five-year cycle. Previously, developing countries were expected to do so only every 10 years. Developed countries are also being asked to submit a short-term update next year.

The proposed agreement states that to achieve the 2015 Paris accord’s ambitious goal of capping global warming at 1.5 degrees Celsius (2.7 Fahrenheit), countries will need to make “rapid, deep and sustained reductions in global greenhouse gas emissions, including reducing global carbon dioxide emissions by 45% by 2030 relative to the 2010 level and to net zero around mid-century, as well as deep reductions in other greenhouse gases.”

Scientists say the world is not on track to meet that goal yet, but various pledges made before and during the two-week talks, which are now in overtime, have brought them closer.

The latest draft agreement expresses “alarm and utmost concern that human activities have caused around 1.1C (2F) of global warming to date and that impacts are already being felt in every region.”

Next year’s talks are scheduled to take place in the Egyptian Red Sea resort of Sharm el-Sheikh. Dubai will host the meeting in 2023.

How is the Omicron variant different and why are scientists so concerned?