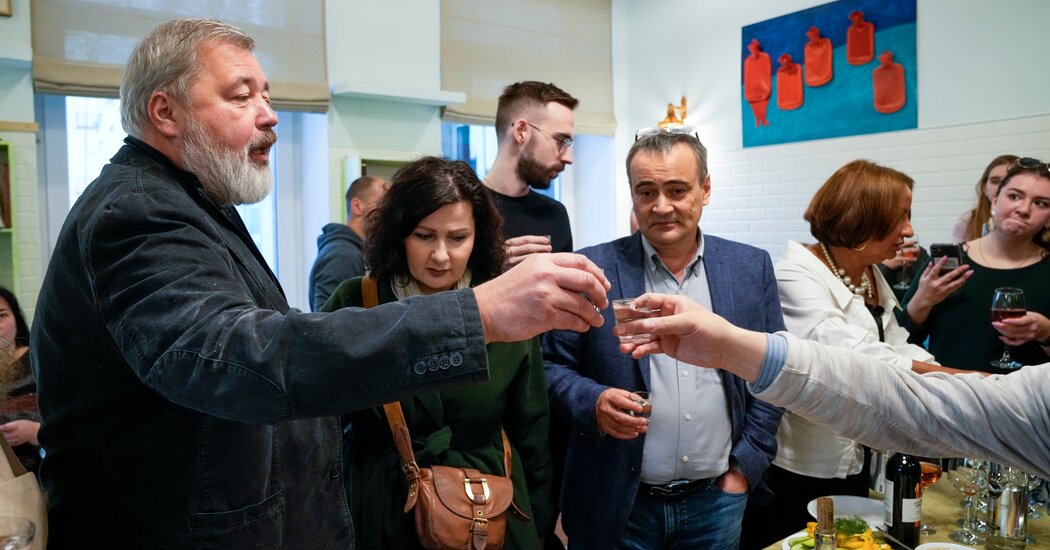 Dmitri A. Muratov, the Russian newspaper editor awarded the Nobel Peace Prize on Friday, said he would have given the honor to a different Russian: Aleksei A. Navalny.

Mr. Navalny, the opposition leader jailed since January, had been seen as a favorite to win the prize. On Friday, some of Mr. Navalny’s supporters reacted with anger to the Nobel announcement, because they see Mr. Muratov as a figure open to compromise with the Kremlin rather than one who remains in principled opposition.

“If I had been on the Nobel Peace Prize committee, I would have voted for the person whom the bookmakers bet on,” Mr. Muratov said in a news conference outside his newspaper’s Moscow headquarters. “I mean Aleksei Navalny.”

The prize announcement came amid a monthslong crackdown on the independent news media in Russia. Popular outlets and even individual journalists have been declared “foreign agents” by the government for allegedly receiving foreign financing, forcing them to include onerous disclaimers alongside all of their content, even on social media.

Mr. Muratov noted that accepting the Nobel’s prize money could, in theory, open him up to being declared a foreign agent. It was an indication of how far the Kremlin’s campaign against the independent news media has gone that Mr. Muratov’s comment about that scenario did not come across as only a joke.

“I posed this question today to the government officials who decided to congratulate me,” Mr. Muratov said. “Will we be declared foreign agents by receiving the Nobel Prize? I didn’t get a straight answer.”

Mr. Muratov said his prize was posthumous recognition of the six journalists who had worked with Novaya Gazeta and been killed; he repeated all of their names twice. The most famous was Anna Politkovskaya, the investigative journalist who was murdered in Moscow on Oct. 7, 2006. As Mr. Muratov spoke, he urged the scrum of reporters listening to him to avoid trampling on the garden that the staff had planted in front of the newspaper’s offices in her memory.

“They don’t give these Nobel Prizes posthumously,” he said. “I think they came up with this as a way for Anya to get the prize, through other, old hands.”