Comments from Ranveer Singh’s Bollywood counterparts came flooding in as he became NBA’s brand ambassador for India.Taking to his Instagram handle, Ranveer shared a post announcing the same. He was also seen nailing a slam dunk in his post.
Check out the post here:

No sooner did he share the update, comments started flowing in from all directions. While his BFF Arjun Kapoor ‘subtly’ trolled him by commenting, ‘Subtle aadmi ho tum baba’, Neena Gupta added, ‘U r smthing else man’. Even Maniesh Paul wrote, ‘Supppeerrr’, followed by fire emojis.
Check out the comments here: 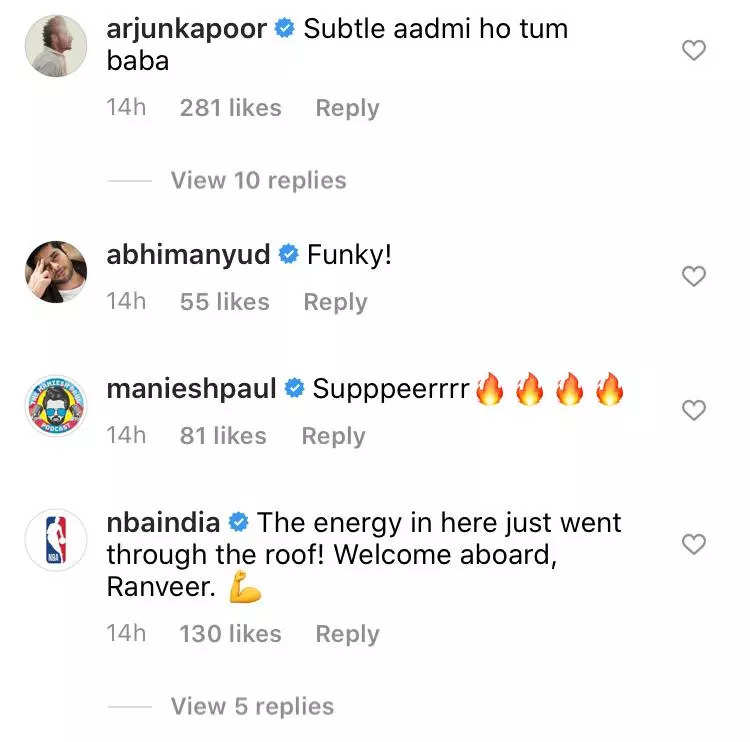 Speaking about the association, Ranveer Singh said in a statement, “I have loved basketball and the NBA since my childhood and have always been fascinated with its influence on popular culture including music, fashion and entertainment. With the NBA tipping off its 75th season celebrations, there couldn’t have been a better time to join forces with the league and support their efforts to grow basketball in the country.” Ranveer will reportedly work with the NBA to help grow the league’s profile in India throughout its landmark 75th Anniversary Season in 2021-22.

Meanwhile, on the work front, he is currently awaiting the release of Kabir Khan’s ‘’83’ where he will be seen essaying the role of cricketer Kapil Dev. The film also stars Deepika Padukone, Saqib Saleem, Tahir Raj Bhasin and others in key roles.

Apart from this, he also has Karan Johar’s ‘Rocky Aur Rani Ki Prem Kahani’ and ‘Takht’ in his kitty. He has also been roped in for the official Hindi remake of ‘Anniyin’, where he will be seen sharing screen space with Kiara Advani.