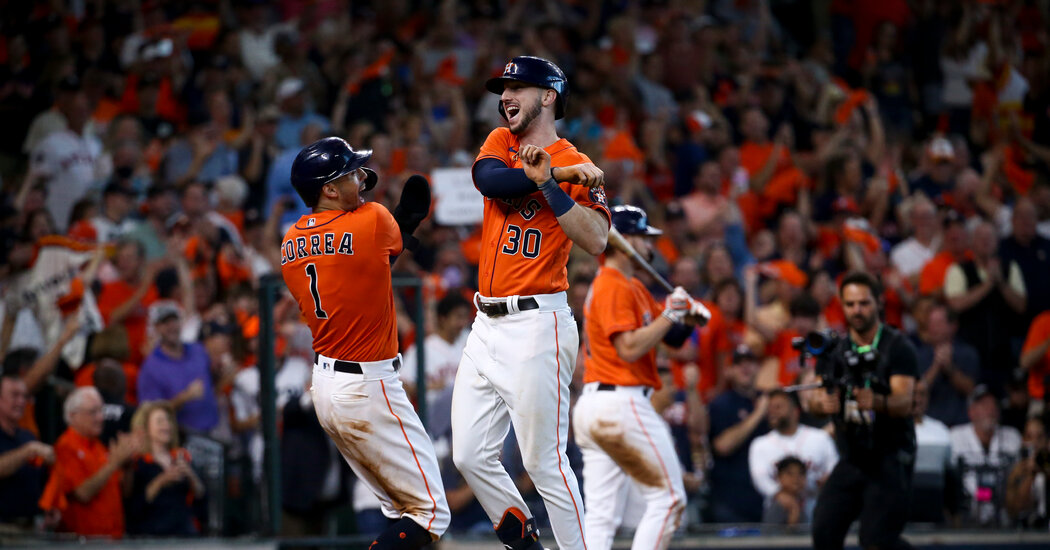 HOUSTON — If you kept score at Minute Maid Park on Friday, you might have felt like a grade-school teacher with a class full of honor students, scribbling little stars onto paper all day. The Houston Astros’ defense was just that dazzling.

From the first play of the game, when shortstop Carlos Correa ranged across the bag and whipped a throw on the run, to the last, when right fielder Kyle Tucker raced into foul ground for a tricky fly ball, the Astros dominated on defense. They left town with a 9-4 victory over the Chicago White Sox and a two-games-to-none lead in this best-of-five American League division series.

“We preach that every single day in our clubhouse: Defense wins championships,” said Correa, who drilled a two-run double in the seventh as Chicago’s Leury Garcia twisted awkwardly in pursuit. “We take a lot of pride in that. From the moment we showed up in spring training, we said, ‘Hey, let’s try to be the No. 1 defensive team in the big leagues.’”

Correa led the majors in defensive wins above replacement this season, according to Baseball Reference, improving his first step and charging slow rollers more aggressively. Overall, the Astros turned 76 percent of grounders and bunts into outs, the best ratio in the A.L.

Examples were everywhere on Friday. Second baseman Jose Altuve made a diving stop with the bases loaded in the first, spinning and firing from his knees for a force at second. First baseman Yuli Gurriel speared a sharp hop in the third, stepping on the bag and tracking down a runner on the bases for an unassisted double play. On and on it went.

The White Sox rapped out 11 hits, but none for extra bases for the second day in a row. They are already facing elimination after two games, an unfamiliar position for Manager Tony La Russa.

In his 10 previous best-of-three playoff series, La Russa has dropped the first two games just once, in 2009, when his St. Louis Cardinals were swept by the Los Angeles Dodgers. On Friday, La Russa drew inspiration from the 2004 Boston Red Sox and their manager, Terry Francona, who recovered from a 3-0 deficit to stun the Yankees in their best-of-seven championship series.

“I’ll never, ever forget, I was sitting in this town in 2004, we had an off-day and I was watching from a restaurant when Boston lost their third game,” La Russa said. “Francona said: ‘All we have to do is just win one game.’ That’s a good thing to say. It made sense.”

Francona — who followed up that A.L.C.S. triumph by sweeping La Russa’s Cardinals in the World Series — now manages for Cleveland. There he won an American League pennant by using his best reliever, Andrew Miller, in high-leverage spots in the middle innings. That strategy usually worked, in part because Francona had another relief star in Cody Allen.

The White Sox traded in July for the majors’ active leader in saves, Craig Kimbrel, to team with Liam Hendriks, the closer they signed for $54 million in free agency last winter. Yet Hendriks did not pitch on Friday until the game was out of reach.

Aaron Bummer faced the top of the Astros’ order in the seventh and gave up three singles to four batters. The Astros led by 5-4 at that point, but Correa’s double and a homer by Kyle Tucker made it 9-4. Hendriks then pitched the eighth, his only appearance thus far in the series.

“Liam had to pitch; we’re off tomorrow, he had to pitch an inning,” La Russa said. “We could have been up by 10, and he’d have pitched. Believe me, on the list of priorities, there’s a lot of stuff that was frustrating about that ballgame, and him pitching, actually, it’s one of the positives.”

Fair enough; La Russa, after all, essentially reinvented bullpen roles for a generation with Oakland, and his methods helped lift him to the Hall of Fame. He has not used Hendriks before the eighth inning this season except in shorter games during doubleheaders, and the White Sox romped to the A.L. Central crown.

But the Astros scored the most runs in the majors this season, and only the best pitchers seem capable of taming them. On Friday they drew five walks in four and a third innings against starter Lucas Giolito, and three of those walks became runs.

They used only hits for their five-run rally in the seventh, capped by Tucker’s homer on an opposite-field drive to left. Tucker, 24, was a stealth star this season, posting the A.L.’s best on-base plus slugging percentage after June 1 at 1.000.

“He’s a natural hitter; natural hitters are always the best hitters in the game,” said Correa, seated next to Tucker at a postgame news conference. “The future is bright for this kid, and not because he’s here. I’ve always told you guys he’s the most underrated player in the league. I’m glad he got this platform in the playoffs to show you how good he really is.”

Tucker was in the minors in 2017, when the Astros won a World Series title widely seen as tainted by an illegal sign-stealing scam revealed in 2020. On Sunday they will play their first postseason road game with fans in the stands, but nobody seems too concerned.

For now, the Astros are having too much fun to worry about being booed. When they play as they did on Friday, they’re a joy to watch.