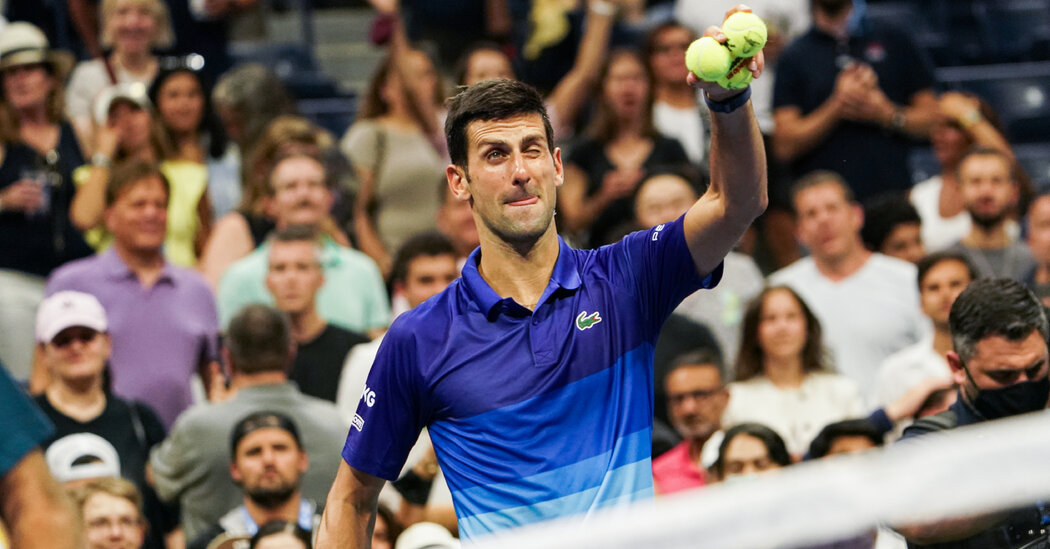 The confusion was understandable on Tuesday night. Novak Djokovic has been through enough me-against-the-world moments at the U.S. Open and beyond to expect the boos even when he is shooting for tennis’s equivalent of the moon.

But the crowd in Arthur Ashe Stadium for this first-round match was actually chanting “Rune” — accentuating the u in the surname of his flashy 18-year-old opponent Holger Rune.

Djokovic is a great champion, and in position in this golden age of men’s tennis to win the statistical race by a hefty margin, ahead of his career-long measuring sticks Roger Federer and Rafael Nadal.

But the road to the summit has often been bumpy, and he has made a number of his own potholes, including the one he dug in his most recent appearance in Arthur Ashe Stadium. That was last year when he was defaulted in the fourth round after unintentionally hitting a line judge in the throat with a ball he struck in frustration after losing his serve against Pablo Carreño Busta.

Djokovic’s gaffe in 2020 came in an all-but-empty Ashe Stadium, devoid of fans because of coronavirus pandemic restrictions. This year, the stadiums and grounds are packed. More than 53,000 came on Tuesday, and it would have been easy to imagine that life had returned to normal if it had not been for the many fans wearing masks in the stands and in the walkways.

Another sign of the times: the line judges are gone. Already absent in 2020 on the outside courts, they have been replaced on all courts this year by the automated line-judging system that eerily uses a prerecorded human voice.

Call it a clean slate as Djokovic tries to make his mark on the game even more indelibly. A Grand Slam is a big deal and deserves to be: Only five players have accomplished it in singles in tennis’s long history.

But Djokovic is close enough to taste the Grand Slam now, having won the first three of the four legs in 2021. After Tuesday night’s victory, he is just six matches away from joining Don Budge, Maureen Connolly, Rod Laver, Margaret Court and Steffi Graf on the short list of those who have achieved it.

Though the shoulder that bothered him at the Tokyo Olympics did not seem to be a problem, it was not an entirely reassuring start. Rune, a teenage qualifier from Denmark whose boyhood hero was Federer, was making his Grand Slam debut. A former world No. 1 as a junior, Rune is a dynamic player with explosive power and contagious energy. He not only won the second set. He also got the crowd on his side in Ashe Stadium, the biggest venue in tour-level tennis with its five tiers and 23,771 seats.

Though Djokovic looked frustrated and off rhythm as Rune evened the match at one-set-apiece, Djokovic never looked genuinely rattled and was under no threat down the stretch.

Rune, playing his first best-of-five-set match, began to cramp in his legs early in the third set and winced and hobbled between points. He was unable to jump into his serve, unable to run down Djokovic’s drop shots and groundstrokes into the corners.

One suspects that Rune has a bright future (and not because he resembles a young Leonardo DiCaprio). But the final two sets on Tuesday lasted just 51 minutes, less time than it took Rune to win the 58-minute second set.

“Unfortunately, my fitness let me down,” Rune said. “I knew if I had to win, I really had to fight for every point. With my body at this point, it was impossible.”

Djokovic, despite Rune’s long affinity for Federer, has played a mentor’s role. They practiced together earlier this season, and when they met for a handshake at then net it turned into something closer to a conversation. It continued later in the locker room after the disappointed Rune left the court in tears, his towel in his teeth.

Though it is easy to forget at this stage, Djokovic, too, once struggled with his endurance on court, only solving the problem in 2010 and 2011 after changing to a gluten-free diet. But he has proved to be a long-running champion.

“I did struggle with injuries and retirements early in my career,” Djokovic said. “That’s why I can relate to Holger, what he’s going through. We just had a little chat in the locker room. It’s an emotional moment for him. It’s not easy to see that. He’s really sad. I understand that. I’ve been through that. I just told him that he handled himself extremely well. He didn’t want to stop. I thought he was going to stop at the end of the third. He just kept going with dignity, finished off the match. He deserved definitely my respect, the respect of a lot of people. He’s still very, very young.”

Respect is a word that resonates with Djokovic. He has not always had the respect he deserves in New York, where he has won three titles. The crowd turned particularly ugly in 2015, when he defeated Federer in a four-set final, cheering on Djokovic’s errors and double faults, and interrupting his rhythm.

In an interview the next day, Djokovic told me that when they had been chanting “Roger” he willed himself to pretend they were chanting for him instead.

He did not seem to rely on such mind games on Tuesday night, and it must be said that “Ruuuuuune” in cavernous Ashe Stadium does sound a great deal like “Booooooo.”

Even Rune was confused, and only learned for certain after the match what was being chanted. “When I heard that I was happy, because I didn’t understand it in the match,” he said. “It was a crazy crowd, the best I’ve ever felt in my life.”

Who wouldn’t gravitate to a charismatic underdog, a young player wind-milling his arms in delight after hitting a winner against the best in the world? At some stage this tournament, you hope the New York crowd takes the full measure of the tennis achievement Djokovic is pursuing and what he has sacrificed to become this extraordinary a player.

He seemed to be conserving his energy and emotions on Tuesday, and he may need to dip into his reserves over the next 12 days.

Self-control is not his trademark. Witness his racket-smashing tirade in Tokyo just last month when he lost the bronze medal match to Carreño.

But he took a break from the tour after that to refresh his mind and attitude. He is not ignoring the elephant in the room in news conferences.

“As always you have tons of expectations and pressure from just the whole tennis community, including myself,” he said late on Tuesday night. “Obviously I would like myself to win, to go far, to win the title and make the history. Without a doubt that’s something that inspires me. But I am focused on trying to be the best version of myself every day. I know it sounds like a cliché, but there is a great power in being present and working on mentally and emotionally being in the moment and trying to handle it in such a way that would benefit you.”

He remains a seeker and a tinkerer, hard-wired to optimize at the peril of trying to fix what may not be broken. But until proven otherwise, he is the game’s best big-match player and whatever the public is shouting from on high, down in the arena Djokovic is just six matches away from one of sport’s ultimate prizes.

Next up on Thursday: a second-round match with the 121st-ranked Tallon Griekspoor.

Some users continue to face difficulties in I-T portal: Infy