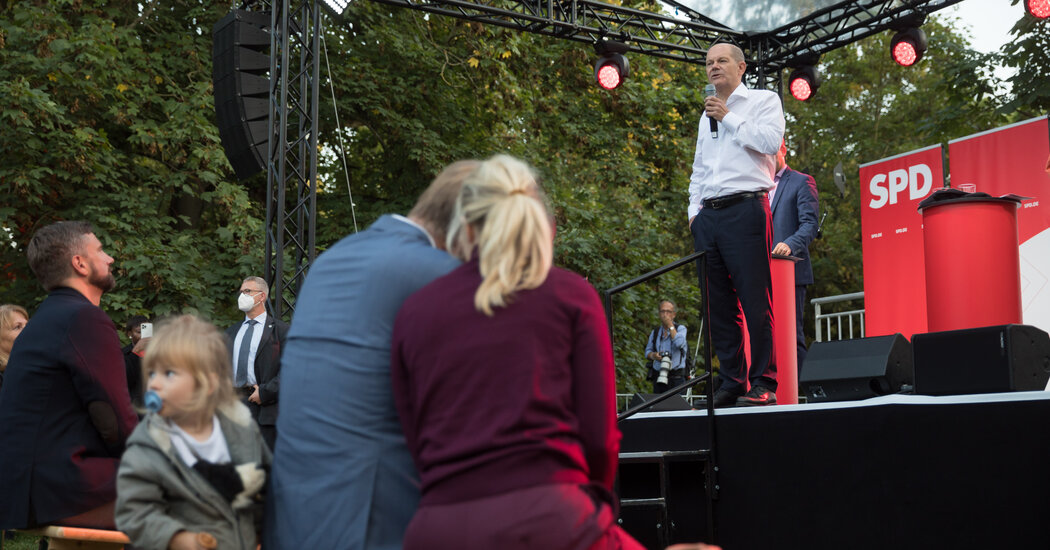 BERLIN — When Olaf Scholz asked his fellow Social Democrats to nominate him as their candidate for chancellor, some inside his own camp publicly wondered if the party should bother fielding a candidate at all.

Germany’s oldest party was not just trailing Chancellor Angela Merkel’s conservatives but had slipped into third place behind the Greens with a humiliating 14 percent in the polls. As recently as June, the German media was framing the contest to succeed Ms. Merkel as a two-way race between her conservatives and the ascendant Green Party.

But with the Sept. 26 national elections fast approaching, Mr. Scholz and his once-moribund party have unexpectedly become the favorites to lead the next government in Europe’s biggest democracy.

“It’s really touching to see how many citizens trust me to be the next chancellor,” a beaming Mr. Scholz told hundreds of supporters at a recent campaign event in Berlin, as he stood in front of a giant screen proclaiming: “Scholz will tackle it.”

Ten months after Joseph R. Biden Jr. won the U.S. presidency for the Democrats, there is a real chance that Germany will be led by a center-left chancellor for the first time in 16 years. Not since the second term of former President Bill Clinton have both the White House and the German chancellery been in the hands of center-left leaders.

“The atmosphere is just amazing right now — we’re almost in disbelief,” said Annika Klose, who is a Social Democrat candidate for Parliament and watched Mr. Scholz speak. “Since I joined the party in 2011, every election result was worse than the last.”

It’s not that Germans have suddenly shifted left. Mr. Scholz, who has served as Ms. Merkel’s finance minister and vice chancellor for the past four years, is in many ways more associated with the conservative-led coalition government than his own party. Two years ago, he lost the party’s leadership contest to a leftist duo, which attacked him for his moderate centrism.

But Mr. Scholz has managed to turn what has long been the main liability for his party — co-governing as junior partners of Ms. Merkel’s conservatives — into his main asset: In an election with no incumbent, he has styled himself as the incumbent — or as the closest thing there is to Ms. Merkel.

“Germans aren’t a very change-friendly people, and the departure of Angela Merkel is basically enough change for them,” said Christiane Hoffmann, a prominent political observer and journalist. “They’re most likely to trust the candidate who promises that the transition is as easy as possible.”

With 25 percent in recent polls, Mr. Scholz’s Social Democrats have overtaken the Greens, now lagging at 17 percent, and the conservatives at barely over 20 percent. But political analysts point out that this would hardly constitute a convincing victory.

“No one has ever become chancellor since 1949 with so little trust,” said Manfred Güllner, head of the Forsa polling institute, referring to the founding year of the Federal Republic of Germany after World War II.

“German voters are quite unsettled,” Mr. Güllner added. “After 16 years of a Merkel chancellorship that provided a certain sense of stability, we’re in a place we’ve never been before.”

On the campaign trail Mr. Scholz has spoken admiringly of the current chancellor. A slickly produced TV ad by the party shows him walking in front of a projected image of Ms. Merkel.

He has been photographed making the chancellor’s hallmark diamond-shaped hand gesture — the “Merkel rhombus” — and used the female form of the German word for chancellor on a campaign poster to convince Germans that he could continue Ms. Merkel’s work even though he is a man.

The symbolism isn’t subtle, but it is working — so well in fact that the chancellor herself has felt compelled to push back on it — most recently in what might be her last speech in the Bundestag.

Mr. Güllner, the pollster, said at least part of the recent surge in support for the Social Democrats comes from Merkel voters who are not happy with her party’s candidate, Armin Laschet, a conservative state governor who has repeatedly fumbled on the campaign trail.

“There is no real Scholz enthusiasm in Germany,” said Ms. Hoffmann. “His success is due primarily to the weakness of the other candidates.”

Unlike his rivals, Mr. Scholz hasn’t put a foot wrong in the campaign. He takes few risks and is controlled to the point that Germans have dubbed him the “Scholz-o-mat” — or “Scholz machine.”

Sticking to his message of stability has also made it harder for his opponents to attack him on past blunders, although some have tried. As mayor of Hamburg he took private meetings with a banker seeking a million euro tax deferment, an episode that has become part of a state investigation, and it was on his watch as finance minister that the fraudulent German fintech company Wirecard imploded.

But this has barely surfaced in the campaign. Instead, Mr. Scholz’s popularity has continued to rise.

Mr. Scholz was a socialist in the 1970s who gradually mellowed into a post-ideological centrist. First defending workers as a labor lawyer, then defending painful labor-market reforms and now co-governing with a conservative chancellor, his journey in many ways tracks that of his party.

In its 158-year history the Social Democrats have been a formidable political force, fighting for workers’ rights, battling fascism and helping to shape Germany’s postwar welfare state. But after serving three terms as junior partners to Ms. Merkel, the party’s vote share had halved.

Gerhard Schröder, the last Social Democrat to become chancellor, won 39 percent of the vote in 2002. In 2005, when the Social Democrats entered their first coalition with Ms. Merkel, they were still winning 34 percent of votes; by 2017 that had shrunk to 20 percent.

But even as his party sank to a postwar low, Mr. Scholz became one of Germany’s most popular politicians.

It helped that as finance minister he controlled the government’s purse strings during the pandemic. After years of religiously sticking to Germany’s cherished balanced budget rule, he promised to bring out the “bazooka” to help businesses survive the pandemic, initially spending 353 billion euros, or about $417 billion, in recovery and assistance funds.

“Scholz has zero charisma but he radiates stability — and he handed out the money in the economic crisis,” said Andrea Römmele, dean of the Berlin-based Hertie School of Governance.

If current polls hold, the Social Democrats will finish first but will need two other parties to form a governing coalition. One would almost certainly be the Greens. As for the other, Mr. Scholz has all but ruled out the far-left Left Party, which would leave either the conservatives or — more likely — the free-market Free Democrats.

Mr. Scholz has offered some ideas on how he would govern differently, but the changes are relatively modest and might be further watered down by his coalition partners, analysts predict.

He has tried to woo his party’s core working-class voters by using “Respect” as one of his main campaign slogans. In his stump speech, he emphasizes that people who earn as much as him should not get tax breaks. Instead, he wants to lower taxes for middle- and low-income earners and raise them modestly for those with incomes of more than 100,000 euros a year.

“We would not expect changes in taxes and spending to add up to a big additional fiscal stimulus,” wrote Holger Schmieding, chief economist for Berenberg Bank in a recent analysis of what a Scholz chancellorship would mean for financial markets. In a coalition with the Greens and the Free Democrats, he predicted, “the pragmatic Scholz himself would likely rein in the leftist inclinations” of his own party base.

Only the conservatives, desperately under pressure, have been arguing the opposite.

Even Ms. Merkel, who had said she wanted to stay out of the race, has recently felt compelled to distance herself from Mr. Scholz’s unabashed attempts to run as her clone.

There is “an enormous difference for the future of Germany between him and me,” Ms. Merkel said.