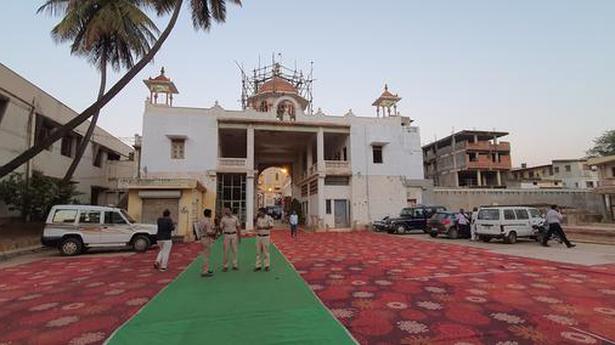 After a fortnight of intense work, over one lakh pages of manuscripts at Moorusavir mutt at Hubballi have been scanned and stored in digital format.

Over 100 volunteers, including regulars such as Veena Paramadi, Basamma Koti, Laxmi Biradar and Nirmala Bisanal, scanned each palm leaf under the guidance of technical expert and researcher Ashok Domlur. Among other things, over 395 manuscripts dating back to around 300 years were cleaned with lemon grass oil before being digitised now.

“We are also digitising old books, which are in very bad state. Once digitised, anybody can access them in digital format. These are mostly copies of 12th century vachana literature. There are also works of other prose and poetry, majority of them related to religion and spirituality,” Mr. Domlur, an IT professional who has taken up the work voluntarily, told The Hindu.

Mr. Ashok has been travelling across India for almost a decade now in pursuit of his passion for digitising manuscripts. “I have found manuscripts of vachana literature in Rajasthan, Nepal, Tamil Nadu, Andhra Pradesh, Telangana and Maharashtra. While most of them were stored by institutions and religious institutions, I also found manuscripts in households of various districts in Karnataka,” he said.

Mr. Ashok said the manuscripts were mostly copies of original works as the life of palm leaves is around 200 to 300 years, and earlier they used to be rewritten on fresh palm leaves.

“Now digitisation will help preserve them permanently. We will have one copy with us, another in the data centre and one with the local person or institution who possessed the manuscript. In the coming years, the idea is to given open access to all through the world wide web. But that will take time, as it is huge data and a lot of funds is required to host it on the world wide web,” he said.

Mr. Domlur sets aside a part of his income for his passion and sometimes gets assistance from like-minded people. Professional photographer Virupaksh Matti is his regular companion.

In Hubballi, after Moorusavir mutt seer Sri Gurusiddha Rajayogindra Swami gave him access to the library, some people, including Vishwanath Chintamani, Lokesh Koravi, Mallikarjun Kalasaraya and S.B. Jodalli, offered assistance with over 100 volunteers, mainly women, taking turns to do the work of scanning the documents.

From Moorusavir mutt, Mr. Domlur proceeded to Shivayoga Mandir in Bagalkot district where 11 bookshelves full of manuscripts are being digitised. In the last one decade, Mr. Domlur has digitised around 5 lakh manuscripts, but says there is still a lot to be done. Any information on manuscripts could be passed on to him on 9886867185.

Priyanka Gandhi stopped by UP police on her way to Agra