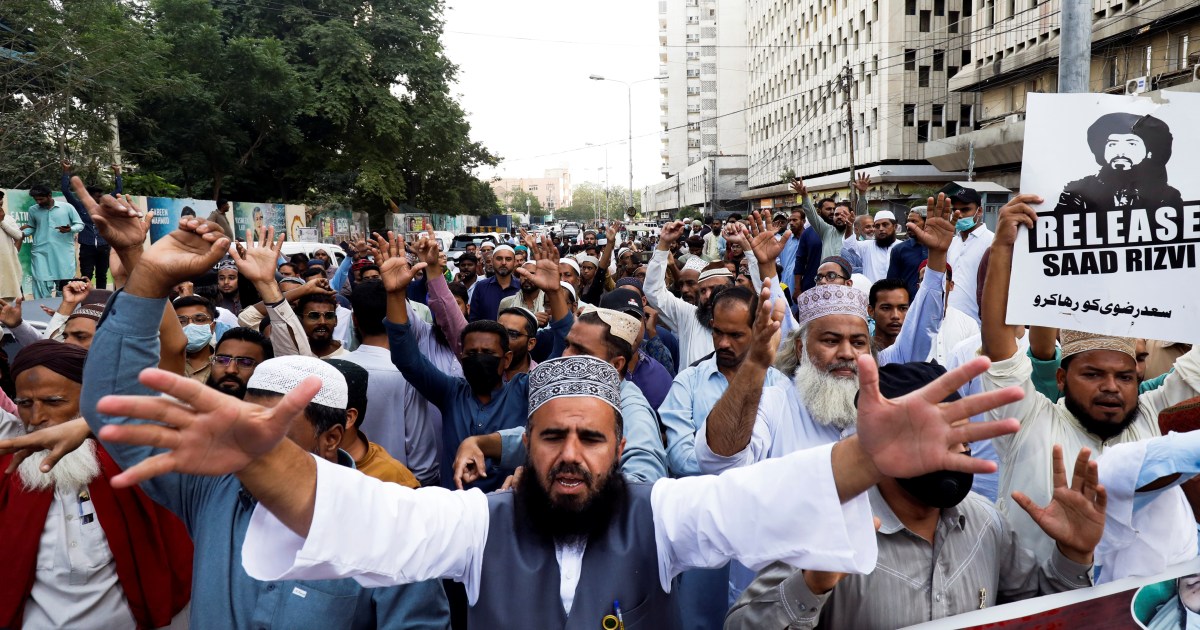 Details of the agreement will be disclosed in the coming days, the far-right TLP party said.

Pakistan’s government has reached an agreement with the outlawed far-right Tehreek-e-Labbaik Pakistan (TLP) party, putting an end to a 10-day protest that resulted in violent clashes.

Foreign Minister Shah Mahmood Qureshi and religious leader Mufti Muneebur Rehman took part in the talks but did not share any details of the agreement at a news conference in the capital, Islamabad, on Sunday.

“Details and positive results of the agreement will come before the nation in a week or so,” said Rehman, who said he had the endorsement of TLP party leader Saad Rizvi.

Thousands of TLP supporters launched a “long march” from Lahore towards Islamabad on October 22 to press for the release of their leader, Rizvi, who was arrested last year for inciting supporters to stage an anti-France protest.

The group is also demanding the expulsion of France’s ambassador for the publication of a series of caricatures depicting the Prophet Muhammad by French satirical magazine Charlie Hebdo.

Paramilitary Pakistan Rangers were deployed to stop the protesters from continuing towards the capital. The protest march saw supporters clash with police at several points along the way. At least seven police officers and four demonstrators were killed and many injured on both sides.

The violence erupted a day after the government of Prime Minister Imran Khan turned down the group’s demand to close the French embassy and expel the French envoy.

Rawalpindi and Islamabad had been cut off from the rest of the country since the march started.

“This protest has already caused hundreds of millions of dollars in losses,” Hyder said. The economic damage of the demonstration, which took place along Pakistan’s busiest highway, includes cargo being seized by the group and used as roadblocks.

“The people of Islamabad have heaved a sigh of relief … Everybody will now be waiting to see how this agreement will be implemented,” he added.

The National Security Committee promised on Friday to crack down hard on the banned TLP if violent protests continued. Information Minister Fawad Chaudhry said Rizvi could not be released without the due judicial process being followed and the protesters should return home.

The demonstrations have compounded pressure on the government as it grapples with a chronic financial crisis and spiralling inflation that has squeezed household incomes hard.

Rizvi’s party gained prominence in Pakistan’s 2018 elections, campaigning on the single issue of defending the country’s blasphemy law, which calls for the death penalty for anyone who insults Islam.

In October 2020, French President Emmanuel Macron tried to defend caricatures of the Prophet Muhammad as freedom of expression. Rizvi responded by calling for his supporters to stage an anti-France protest.

Macron’s comments came after a young Muslim beheaded a French school teacher who had shown the caricatures in class. The images were republished by Charlie Hebdo to mark the opening of the trial over the deadly 2015 attack against the publication for the original caricatures.

US voting rights in spotlight ahead of Biden’s ‘Democracy Summit’