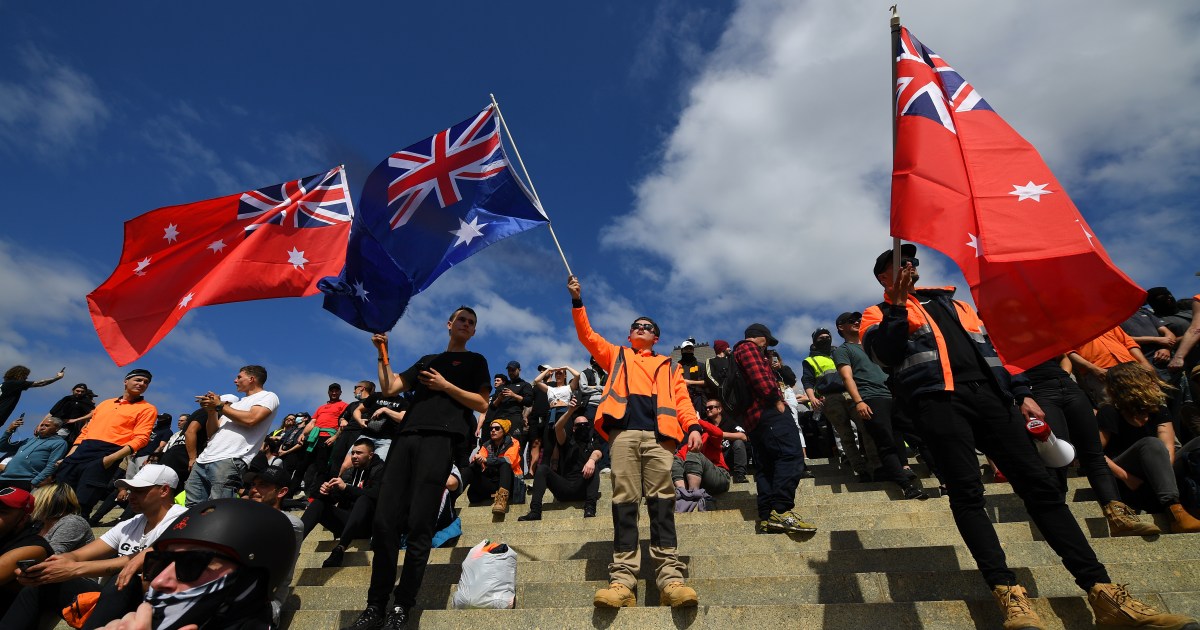 I’ve always been a walker. It’s my way of de-stressing. Under lockdown, I assumed taking walks around my neighbourhood would be a therapeutic activity. But this has not been the case. Instead, my walks led me to question my ideals of community.

In my mostly white suburb of inner-city Melbourne, I regularly witnessed violations of lockdown rules – people visiting one another, not wearing masks, working out in groups in their garages. All these activities appeared to occur under a cloak of assurance – people seemed convinced that they should not and would not face any consequences for their actions.

As a long-term critic of policing, criminalisation and state powers, the pandemic has placed me in an uncomfortable position. Seeing these flagrant violations of basic restrictions put in place to prevent a virus from spreading has made me wonder how, without state intervention, we could preserve public health when members of the community show little regard for the safety of others?

Melbourne and Sydney, two of Australia’s biggest cities, have witnessed significant resistance to COVID-19 restrictions and vaccine mandates. There have been protests, and even riots.

This still growing resistance marks a convergence of racism, class struggles and conspiracy mindsets. These forces are not new to one another, but long-term acquaintances – something white Australia’s long history of racial paranoia attests to.

The state’s (mis)management of this pandemic, however, has led us down a dangerous new path. It has not only had corroding effects on community relations, but also made it increasingly difficult to comprehend the nature of the resistance to expanding state powers.

In Australia, both pandemic anxiety and policing have been expressed in racial terms.

In between each lockdown, there were frequent murmurs about how the new cases were mostly in “multicultural suburbs” – meaning the usual suspects, migrants, were the ones not adhering to regulations and expanding the pandemic’s lifespan.

In April-May 2020, Australia’s Muslim community spent the month of Ramadan, the most holy and social in the Islamic calendar, confined in their homes, as mosques were closed and large social gatherings were banned. But a rise in infection numbers in June, and the news that a small cluster of Muslim households had been affected by the new outbreak, resulted in the community being scapegoated and targeted.

Shortly after, on July 4, nine public housing towers in North Melbourne and Flemington were put under immediate lockdown. Residents of these towers, mostly of migrant and refugee backgrounds, were left without food, medicine and access to fresh air for days. The lockdown was lifted at eight of the nine towers after five days, but residents of the remaining tower, where infection rates were highest, were detained for another nine days.

The ombudsman of the state of Victoria later described the state’s handling of the Melbourne housing tower lockdowns as a breach of human rights. But the state government disagreed and refused to apologise.

Throughout the rest of the year, Victorian state officials continued to suggest minority communities are primary spreaders of COVID-19.

In September, the Afghan Australian Community of Victoria group accused the state’s Chief Health Officer, Professor Brett Sutton, of blaming a new outbreak in the Melbourne local government area of Casey on the Afghan community. Sutton had implied in a public briefing that Afghans were not adhering to COVID-19 restrictions, without showing any evidence.

The COVID-related minority bashing in Melbourne continued in full force after the emergence of the Delta strain in 2021. The Jewish community, for example, received threats and abuse after a small number of Orthodox worshippers in the city breached COVID-19 restrictions.

And this has not only been happening in Melbourne. The pandemic response has been shaped by racism in Sydney too.

Spiralling indecision by the authorities has led to weeks of lockdown in the state of New South Wales in 2021. But, despite its own poor handling of the Delta variant being at the core of the problem, the state chose to scapegoat minorities living in the capital, Sydney, for rising infection numbers. It heavily policed multicultural areas in the western suburbs, while allowing the fairer and richer residents living in the eastern parts of the city to interpret the restrictions as they pleased.

Even at times when data clearly showed that most cases were originating in the eastern suburbs, hundreds of police officers descended on the west. Australian racial justice organisation, Democracy in Colour, described the policing tactics used in Sydney as “thinly veiled racism”. “This isn’t a public health response,” the organisation’s National Director Neha Madhok told Australian media in July 2021, “it’s explicitly targeting people of colour and working-class communities in the western suburbs.”

The Delta variant devastated Sydney. With the rising number of infections, hospitals reached full capacity and hundreds of people lost their lives. Grieving while trying to adhere to the rules of lockdown has pushed many communities to breaking point.

We may be able to temporarily suspend life to ride out this pandemic but a life that has departed holds over us the obligation and rite of burial. How we deal with the dead is a signature of who we are, and every culture signs off its dead with its unique mark.

On September 15, police interrupted a Muslim funeral in Sydney. Officers accused mourners trying to watch the ceremony from inside their cars of breaching COVID-19 social distancing regulations and went on to arrest those who refused to leave. The move was particularly jarring given that around the same time many white Australians were blatantly violating COVID-19 restrictions on eastern beaches, without any police intervention.

The Australian state’s attempts to bring the pandemic under control have been met with significant resistance. People took to the streets in large numbers to protest. But it soon became clear that the protesters’ anger was not directed at the disproportionate policing of already marginalised communities, or the state’s apparent failures in following a consistent public health and protection policy.

In September, for example, there were widespread protests in Melbourne following the Victorian government’s decision to shut down the city’s construction industry and also introduce new restrictions, including mandatory vaccination, to stem the spread of the virus among workers. The protesters clashed with police, vandalised public buildings and urinated on monuments. Hundreds of people were arrested and dozens of police officers were injured.

The overwhelming presence of police at these protests led to much criticism. But it was also not possible to see these protests as a workers’ struggle against oppressive conditions. It was clear, from witness accounts and news footage, that the protests did not have a single leader and were attended by many different groups with different motivations and goals. Yet, the Trump signs and white supremacist slogans and iconography that dominated the rallies signalled a strong far-right presence. Repeated chants of “stop the jab”, meanwhile, pointed to the presence of anti-vaxxers. Some of these people were undoubtedly workers and union members, but these protests could hardly be classified as a “workers’ struggle”.

The protesters claimed that freedom is in crisis. But where were these freedom fighters in the past 20 years? Those attacking key workers asking them to wear a simple mask today were not too concerned when the “war on terror” introduced a securitised environment that eroded civil liberties and rendered privacy a concept of the past.

Australia has seen over 70 counter-terrorism laws introduced since 9/11. Each, pushing the boundaries of state power. I suppose curtailing the freedoms of those with darker skin did not feel like freedom lost for white Australians – it felt like freedom gained.

We can still try and see these protests as a sign of the devastation these lockdowns have brought on the economic livelihood of Australians. But the demands made by these protesters – the resumption of normal work activities, an end to mandatory vaccination and mass distribution of Ivermectin (the deworming medicine that has no proven effect on COVID-19 recovery) – tells a different story. The protesters, mostly white and male, have not been asking for an end to racism, economic inequality or any other social ills whose impact increased during the pandemic. They have not been asking the state to handle the pandemic in a more efficient and just way either. Instead, they have been demanding that the authorities ignore this global health crisis completely, and preserve all their freedoms at any cost.

As social theorist Judith Butler warned, bodies on the street are not a political good in and of itself. The “Make America Great Again” demonstrations in the United States that cumulated in an insurrection at Capitol Hill on January 6 already illustrated this compellingly.

The recent protests in Australia are similar to pro-Trump demonstrations in the US in many ways. Like their American counterparts, the protesters in Australia are claiming that their presence on the streets is an expression of public character and collective refusal. But we need to stop and ask why they assembled, and whether their demands would improve the lives of Australians at this moment of crisis.

We might turn to last year’s Black Lives Matter protests as a comparative point on dissent amid a pandemic. Thousands of people broke lockdown rules to come together and demand an end to racism and racialised police brutality. It was an assembly that spoke to the most inclusive expression of public character. Just as mourning the dead cannot be suspended, so too the Black struggle for social justice and recognition. Protesters still acknowledged the dangers of COVID-19 – most of them wore masks and tried to practise social distancing.

In this pandemic, while communities who have always faced the intrusions of the state continue to be over-policed, white Australians are confronting what others have always known: the limits of their freedoms.

The feeling of being constrained in any way is intolerable for those who feel entitled to act as they wish at all times. White people now feel their freedom is under attack, and like an autoimmune disease, they are fighting back by targeting what protects us from a deadly virus that has killed millions globally: masks and vaccines.

The views expressed in this article are the author’s own and do not necessarily reflect Al Jazeera’s editorial stance.