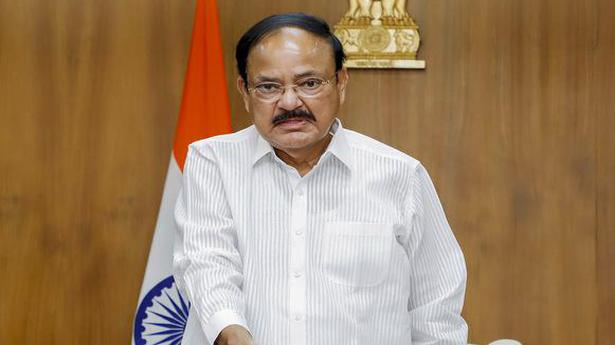 Vice-President M. Venkaiah Naidu said people vote for public representatives who, they think, would give voice to their hopes and demands, frame laws that address critical issues.

Vice-President M. Venkaiah Naidu on Saturday expressed concern over the “increasing distress among people” with the ways laws are being framed in the country amid rising disruptions in Parliament and State legislatures.

Addressing the MLAs during a special Assembly session in Itanagar, on second day of his two-day visit to the border State, Mr. Naidu said that people vote for public representatives who, they think, would give voice to their hopes and demands, frame laws that address critical issues.

“People are getting distressed with the rising disruptions in Parliament and State legislatures and the way the laws are being made. When they find that there is no serious discussion happening and no tangible decision made, their faith in the system gets eroded,” he stated.

The Vice-President called upon the members of the State Assembly to take a resolve to strengthen the democratic traditions of the nation.

“As the chairman of Rajya Sabha, it is appropriate and even imperative on my part to briefly refer to the functioning of Parliamentary institutions of our country. The course of events during the last Monsoon Session of Rajya Sabha continues to linger in the minds of the people as the August House was subjected to sacrilege with some members tearing and throwing into air Parliamentary papers besides climbing on to the sacred table of the House,” he said.

There have been instances of similar “unruly behaviour” in certain State legislatures, and this trend should not be continued, he maintained.

“We must ensure that our Parliament and State assemblies become effective instruments for shaping new India that we all are dreaming of. Our democracy is one of the oldest and the largest democracies in the world. Let us make it the best,” Mr. Naidu said.

The Vice-President further asked the Assembly Secretariat to arrange for more sessions and constructive debates on issues of public interest, stating that the average sittings of the House per year were around eight in the State.

Noting that the Arunachal Pradesh House has only four women representatives, he also said that of the total 498 members in the eight legislative Assemblies, just 20 of them are women.

“There is a strong case for involving more women members in law-making, not only in this region but in other legislatures too and Parliament,” he said.

He further said that given the ethnic diversity in the northeast, there are special constitutional provisions enabling autonomous councils for people’s participation in governance and their effective functioning can help achieve intended goals.

“I am glad that in conformity to the constitutional provisions, the State government has decided to devolve, funds, functions and functionaries to Panchayati Raj bodies. It is a step in the right direction,” he said and lauded the State government for its initiative ‘Sarkar Apke Dwar’ (government at doorsteps), which aims to bridge the gap between the citizens and government.

“We have a federal polity that enables synergy between local aspirations and national ambitions. There are several State and national parties in the country. Over 30 parties have representatives in Parliament, including those from this region. There are 17 State-level parties represented in the Legislative Assemblies of the eight north-eastern States and I find that 12 of them are in the governments of respective States,” he said.

He added that the participation of State-level parties in the governance of the region with a population of about five crore, in conjunction with national parties, is a statement of aligning local aspirations with national ambitions.

“We should work as Team India, capitalising on each other’s strengths with the ultimate aim of transforming the lives of our people in this region as well as across the country,” Mr. Naidu added.

Higher officials in government should be open to consultations, not let ego come in the way: Gadkari

Higher officials in government should be open to consultations, not let ego come in the way: Gadkari