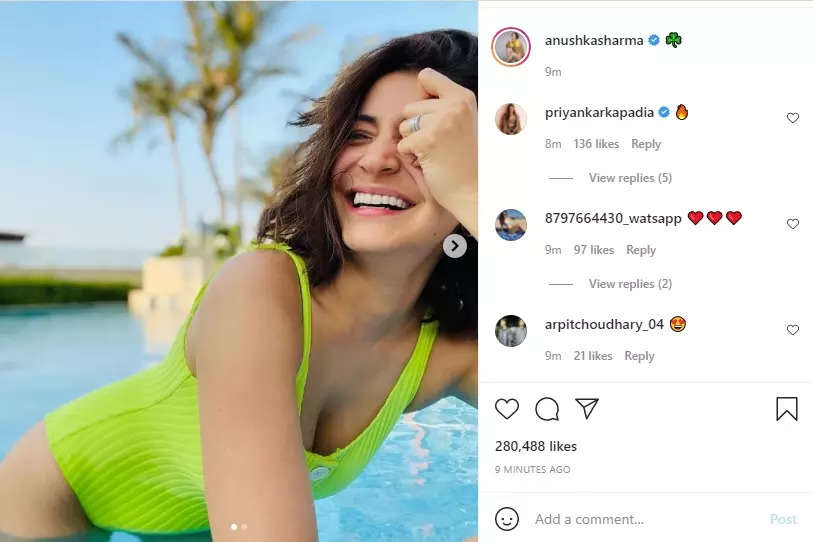 Anushka Sharma lit up Instagram by sharing some stunning pool pictures of herself with her fans. Dressed in a neon green monokini, the actress looked drop-dead gorgeous as she soaks in the sun in the swimming pool.
Check out the photos here:

Anushka has been accompanying her husband Virat Kohli on his cricket tournaments across the globe with her daughter Vamika. The family was last seen having fun in Dubai before returning to the city.
Anushka and Virat, who got married in 2017 in a lavish destination wedding in Italy, have been painting the town red ever since with their love story. The couple became proud parents to a baby girl earlier this year.

Although they have consciously kept their baby girl away from the prying eyes of the media, they often give their fans a glimpse of their angel by sharing pictures and videos of her on social media.

On the professional front, Anushka has resumed work. She recently featured on the cover of Grazia where she looked absolutely stunning. She was last seen in Aanand L Rai’s ‘Zero’ where she shared screen space with Katrina Kaif and Shah Rukh Khan. The movie received mixed reviews from the audience and the critics alike.

Although the actress has been churning out projects as a producer, she is yet to announce her next as an actor. There are various reports doing the rounds speculating her next film. However, there has been no official confirmation from her side.