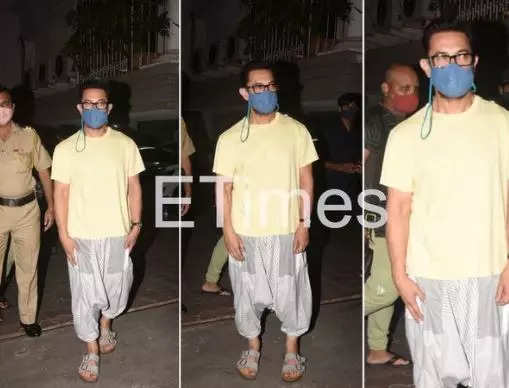 On Sunday night, Bollywood actor Aamir Khan was papped outside his ex-wife Reena Dutta’s house in Mumbai. On being spotted by the shutterbugs, he happily posed for pictures in his unique style statement.
The superstar kept cameras clicking in his innovative look that included silver dhoti pants, paired with a cool solid yellow t-shirt as he paid a visit to Reena. He was also sporting a facemask, owing to the safety amid the pandemic.

Aamir and Reena were neighbours for years when they were in their teens. Later the two tied the knot in 1986. They are parents to two kids, a daughter Ira Khan and son Junaid Khan. After 16 years of marriage, the two decided to part ways in 2002.

Aamir once called their divorce ‘tough for both of them. He had shared that he and Reena were very young when got married. Calling it a special relationship, he said that she was one of the three women of his life who are very important parts of his life. Their kids Ira and Junaid share a close bond with Aamir’s ex-wife Kiran and Azad.

On the work front, Aamir will be next seen in his upcoming ‘Laal Singh Chaddha’. In the film, he is sharing the screenspace with Kareena Kapoor Khan.