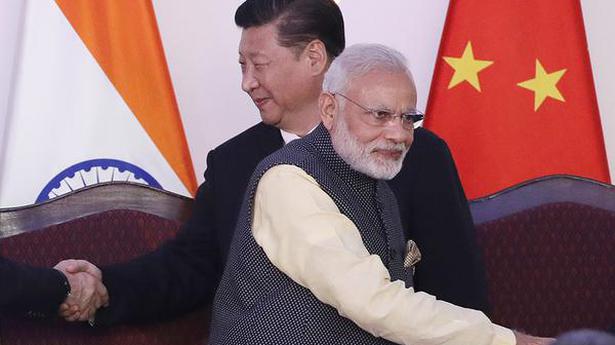 Afghan situation likely to dominate agenda amid growing polarisation between the Russia-China bloc, and U.S. and its allies

Prime Minister Narendra Modi will chair a meeting of BRICS leaders including Chinese President Xi Jinping, Russian President Vladimir Putin and leaders of Brazil and South Africa on Thursday, the first in a series of summit-level meetings he is expected to attend in September that will be dominated by discussions on the situation in Afghanistan. The meeting will be held in virtual format due to COVID-19 restrictions.

The PM will also attend via video conference the Shanghai Cooperation Organisation (SCO) Heads of Government meeting being held in Dushanbe on September 16 and 17, but is expected to travel later this month to the U.S., to meet U.S. President Joseph Biden and address the UN General Assembly, officials confirmed.

The meetings will see Mr. Modi straddle both sides of views on the future of Afghanistan, given the growing polarisation between the Russia-China bloc, and the U.S. and its allies on engaging the new Taliban regime.

The BRICS leaders summit on September 9 is expected to focus on four priority areas including the multilateral reforms in bodies such as the UN, the IMF and the WTO, counter-terrorism, technology and people-to-people exchanges, a statement issued by the External Affairs Ministry on Monday said.

“The leaders will also exchange views on the impact of the COVID-19 pandemic and other current global and regional issues,” which is expected to include Afghanistan, where Russia and China have played an important role in talks with the Taliban.

Meanwhile, Foreign Secretary Harsh Shringla returned to India after meetings in Washington to firm up Prime Minister Modi’s visit to the U.S., due to begin on September 23.

The PM’s visit, only his second visit abroad during the coronavirus pandemic, is expected to include meetings in Washington with Mr. Biden, a possible Quad summit on September 23 and 24, and his address to the UN General Assembly on September 25.

MEA officials said the details of the meetings are still being “finalised”, in view of the uncertainty of Japan’s participation after Premier Yoshihide Suga announced he would resign at the end of the month. While Indo-Pacific security, and Quad cooperation on climate change, and vaccines will be at the top of the agenda at the Summit, the situation in Afghanistan after the U.S. pullout is likely to be discussed as well.

The SCO meeting next Thursday in Tajikistan will see a much greater focus on Afghanistan, given that it comprises regional countries Russia, China, Central Asian nations and Pakistan, and will include a special SCO Contact group meeting. Mr. Putin, Pakistan PM Imran Khan and other leaders will attend the summit in Dushanbe in person, and Mr. Modi and Mr. Xi are expected to appear virtually at the “hybrid” conference.

India would be represented on the ground in Dushanbe by External Affairs Minister S. Jaishankar, said officials, explaining that the Tajikistan government has been extremely cooperative during India’s evacuation mission from Afghanistan, when Indian Air Force military aircraft was allowed to park Dushanbe airport between its slots for landing in Kabul. The government has thus far evacuated 565 people from Afghanistan after the fall of Kabul, and still hopes to evacuate about 140 others, including about 20 Indians, and will possibly need further assistance from nearby countries.

Of the SCO countries, Russia, China and Pakistan continue to operate their embassies in Kabul, while U.S. and its allies have moved their embassies to Doha for now, where the Taliban’s Political office is based. Although neither side has promised recognition to the Taliban regime yet, both sides are divided on the extent of engagement with the new government, sanctions, and the subject of the freezing of Afghan reserves by the IMF, which the Russia-China combine has criticised.

Kin of those who list life to COVID to be compensated