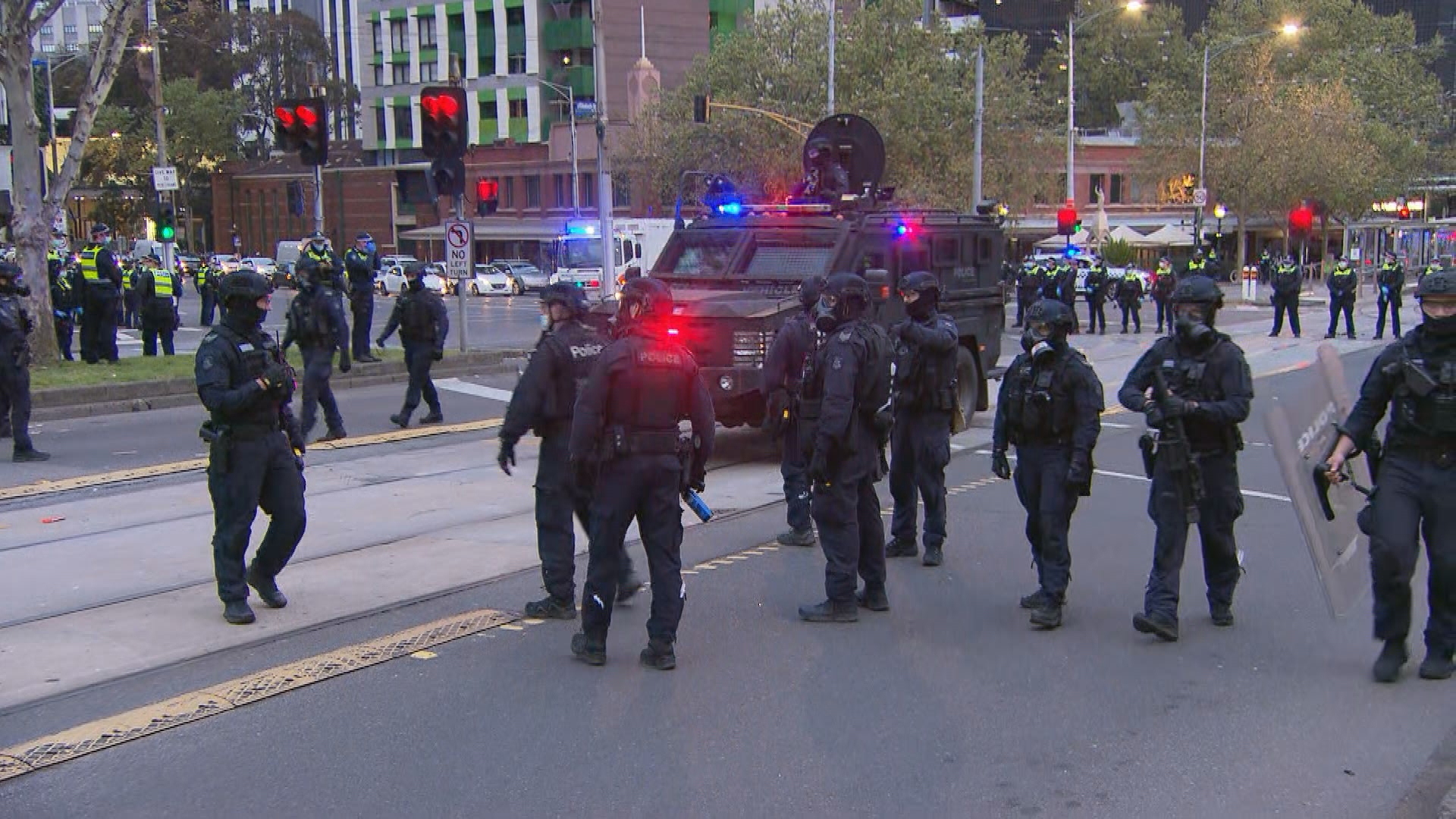 Victoria Police Chief Commissioner Shane Patton said the events of the day were not “a protest” but at times “an affray” and there were “criminal scenes”.

Three police officers received minor injuries in the chaos while a journalist was also injured and police cars were damaged.

“Any police force anywhere in the world would have been challenged,” he said.

He said the protests had further involved criminal behaviour, with groups of “angry men” causing a series of rolling confrontations with police from 10am right through till the protest concluded about 6pm. 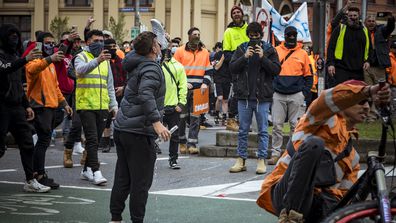 Commissioner Patton said police cars were damaged after the group converged on the vehicles and threatened officers.

He said lit flares, rocks and bottles were also thrown at police.

“The type of activities committed by these cowards was disgraceful.

“This was totally unacceptable conduct.”

Late this afternoon protesters were seen walking into peak-hour traffic travelling at about 80km/h, hitting cars – including police cars, forcing trams to halt, setting off flares, drinking alcohol and throwing items at police.

More than 500 police from a range of specialist units were involved in diffusing the protest.

Commissioner Patton said the thousands of “selfish individuals” involved in the protest had all placed themselves and others at risk of contracting COVID-19.

He said they had also impacted the public by infiltrating traffic on the West Gate Freeway and allegedly damaging some cars.

Aerial vision captured a steady stream of construction workers in high-vis sprawling across the busy West Gate Freeway on the outskirts of the CBD in Docklands this afternoon.

The workers were seen weaving in and out of large trucks and traffic, ignoring the honking of horns, while chanting “f— the jab”, lighting flares and flying Donald Trump 2020 and CFMEU flags.

Some climbed on top of halted vehicles, including trucks.

“I cant imagine how frightening it must have been for drivers,” Commissioner Patton said.

The Chief Commissioner has issued a warning to anyone considering protesting tomorrow.

“My message is really clear: stay away.

“We will be out in force again.”

He said while police had arrested 62 people of the day’s chaos, police were continuing to investigate the criminal activities that took place.

Matildas not distracted ahead of Brazil friendlies