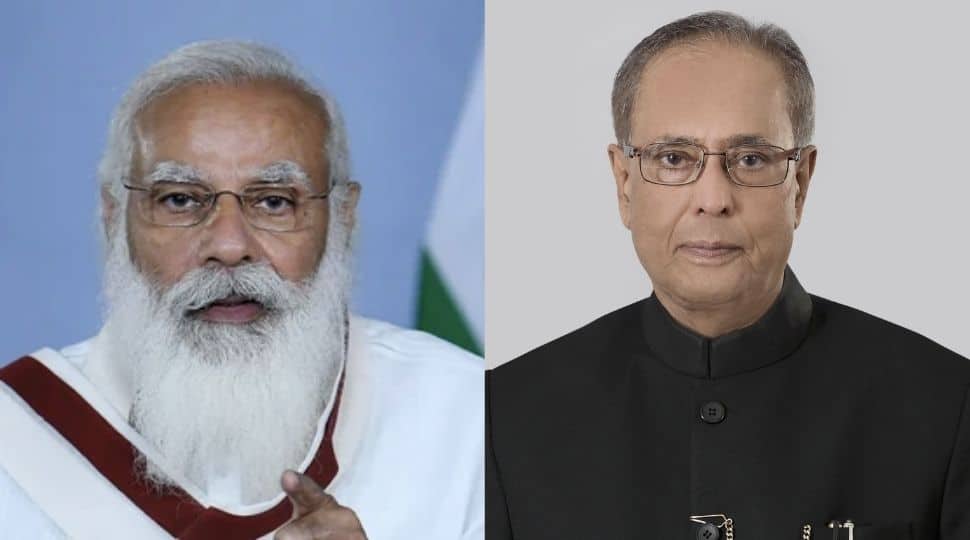 New Delhi: Hailing Pranab Mukherjee as a visionary and statesman, Prime Minister Narendra Modi has said that during the former president’s outstanding public life, his administrative skills and acumen always shone through various responsibilities that he shouldered.

In a message that was read out at the first Pranab Mukherjee Memorial Lecture on Tuesday (August 31) to mark the first death anniversary of the former president, PM Modi said that blessed with unparalleled intellectual capabilities, Bharat Ratna Mukherjee made remarkable contributions to the nation’s progress.

“A visionary and a statesman. Shri Pranab Mukherjee was widely respected and admired across the political spectrum. A distinguished Parliamentarian, his speeches and interventions were of the finest quality, reflecting his grasp over a range of diverse issues,” the prime minister said in his message.

During his outstanding public life, spanning over decades, his administrative skills and acumen always shone through various responsibilities that he shouldered, Modi said. As the President of India, Mukherjee upheld the highest traditions, further strengthening the democratic fabric of our nation, he said.

PM Modi noted that Mukherjee made Rashtrapati Bhavan even more accessible to people. “I was blessed to have always got guidance and support of Pranab da. I vividly remember his insightful counsel on many policy matters,” he said.
As the nation is celebrating Amrit Mahotsav of Independence, it is only apt to recall Mukherjee’s reverence for the democratic values enshrined in the Constitution, the prime minister said.

“The death of Shri Pranab Mukherjee has created a vacuum in the intellectual as well as the political arena of the subcontinent. He would be remembered as an inspiration for coming generations of the region,” Hasina said.

Bhutanese King Jigme Khesar Namgyel Wangchuck said that while he cherishes the many meetings with Mukherjee, he feels the absence of the Indian leader’s wisdom, wise counsel and support which he was fortunate to receive.

“Shri Mukherjee contributed greatly in further strengthening the excellent relations between Bhutan and India. He had a long and close association with my father, the 4th King and they developed a close bond of friendship,” Wangchuck said.

“My father and I will always remember Shri Pranab Mukherjee with affection and respect as a warm human being, a wise statesman, and a very good friend of Bhutan,” he said.

Pranab Mukherjee served as the 13th President of India from 2012 until 2017. As a senior leader of the Congress, he also held several ministerial portfolios in the government of India.