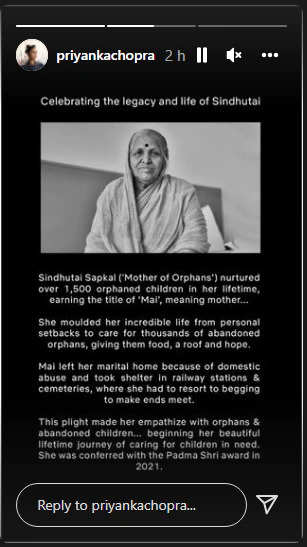 Priyanka Chopra Jonas has paid a tribute to social worker Sindhutai Sapkal, who passed away on January 4. She is referred to as ‘orphan children’s mother’. Priyanka, who is also known for her charity work, took to social media and penned a heartfelt note.
Sindhutai Sapkal, who raised over 1000 orphans, suffered a heart attack in Pune. Priyanka took to her Instagram stories and shared a picture of the late social worker. Along with it, she wrote, “Sidhutai Sapkal moulded her incredible life from personal setback to care for the thousands of abandoned orphans, giving them food, a roof and hope. Mai left her marital home because of domestic abuse and took shelter in railway stations and cemeteries, where she had to resort to begging to make ends meet. This plight made her empathise with orphans and abandoned children beginning her beautiful lifetime journey of caring for children in need. She was conferred with the Padma Shri award in 2021.”

She also shared a video message of Sindhutai Sapkal and wrote, ‘Om Shanti’. Have a look:

Earlier, Bollywood and Marathi popular actor-director Ananth Narayan Mahadevan, who made the National Award-winning ‘Mee Sindhutai Sapkal‘ (2010) on the life of the ‘Mother of Orphans’, expressed grief and expressed condolences. He told ETimes, “You never know what is there in your destiny. There was no logic to do people like Sindhutai Sapkal and Ananth Narayan Mahadevan meeting. There was an edition called ‘Crest’ from Times Of India which used to come every Saturday. It used to carry interesting stories. One of the stories was about ‘Sindhutai Sapkal’. I was curious to know about her life and I reached out to her.”