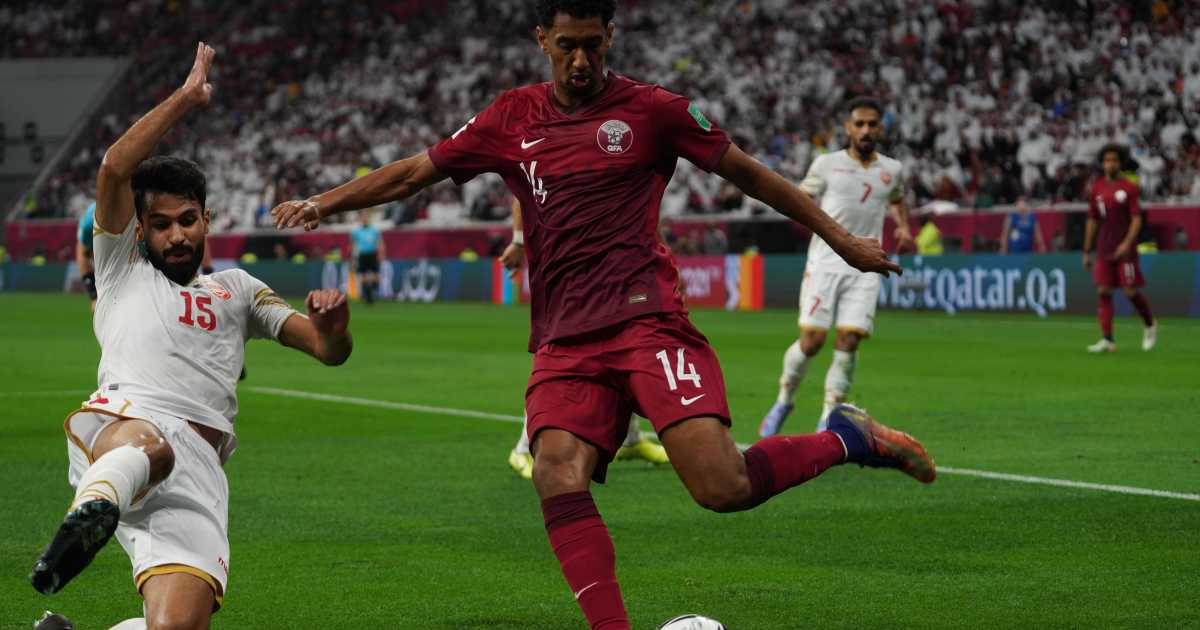 Abulaziz Hatim scored on a perfect header to give Qatar the 1-0 win over Bahrain.

Doha, Qatar – Qatar opened the FIFA Arab Cup tournament with a rare win against Bahrain on Tuesday with a late goal against their Gulf rivals.

In other matches, Tunisia beat Mauritania 5-1 and Iraq and Oman tied 1-1 on the first day of the competition.

After a lavish opening ceremony at the Al Bayt stadium, Bahrain started as the better club but Qatar came on strong before the end of the scoreless first half.

Early on Bahrain’s Abdulwahab al-Malood narrowly missed a goal after he headed the ball just wide.

Qatar’s Mohammad Waad had a dangerous chance at the 18-minute mark, striking the ball to the top half of the goal, but Bahrain keeper Sayed Mohamed Abbas lunged with his right hand and deflected it to safety.

At the 57th minute, Abulaziz Hatim drove a free kick to the far post that Ahmad Fathi headed into the pitch and the ball bounced just wide. Qatar continued to control play as Ali Moez Ali drove a fine pass from Akram Afif off his head just centimetres wide of the goal at the 64th minute.

Qatar finally broke through in the 68th minute Hatim directed a perfect header off the post and in to give the reigning Asian Cup champions the victory.

The hosts of the FIFI World Cup 2022, Qatar had not beat Bahrain since a friendly in 2004. Group A includes Qatar, Bahrain, Oman and four-time champions Iraq.

The only goal from the Mauritanian team was scored by Moulay Bessam who put it home on a penalty kick.

The Tunisian team secured its first three points in Group B, which also includes the United Arab Emirates and Syria.

Iraq scored a late goal in a thriller against Oman to secure a 1-1 draw on Tuesday at the Al Janoub Stadium.

Saleh al-Yehani scored for Oman at the 78th minute after he beat Iraqi goalkeeper Fahad Talib with a blast into the right corner. After a VAR decision, Hasan Abdulkareem replied on a penalty kick for Iraq in the fourth minute of stoppage time.

The final match of the day will see the United Arab Emirates take on Syria.

The FIFA Arab Cup is hosted by Qatar until December 18 with the participation of 16 teams.

Iraq, the most successful team in the history of the competition, has four titles followed by Saudi Arabia with two. Egypt, Morocco and Tunisia each have won the tournament once.

A fourth shot may not offer much more protection against catching Omicron, an early Israeli study suggests.