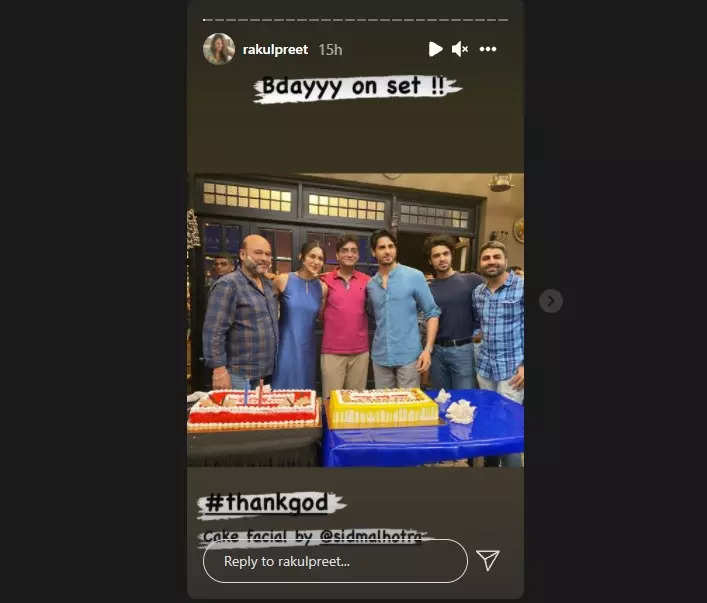 Little did Rakul Preet Singh know about the birthday surprise waiting for her on the shooting floor of her next film ‘Thank God’. The talented actress who turned 31 today (October 10) was on cloud nine as she celebrated the day with her colleagues.

Sidharth Malhotra, too, was there attending the party. Later, the actress shared a series of pictures from the celebration on her Instagram stories. It was sort of a pre-birthday celebration for Rakul on Saturday with the ‘Thank God’ team. Sidharth Malhotra even gave her a ‘cake facial’ while others cheered for the actress. Check out the pictures here:

Of late Rakul Preet has made headlines due to the Enforcement Directorate’s summon in connection to a four-year-old Tollywood drugs matter and money laundering case in drug trafficking and consumption. Last month she was grilled by ED in Hyderabad for almost six hours.

On the work front, apart from ‘Doctor G’, Rakul also has ‘ MayDay‘ with Ajay Devgn and Amitabh Bachchan. Rakul will play the role of a pilot in the film currently slated for an April 29, 2022 release. She will also be teaming up with Ajay for ‘Thank God’ that will co-star Sidharth Malhotra. She recently wrapped up the shoot of her yet-to-be-titled film with Akshay Kumar which is being directed by Ranjit Tiwari.