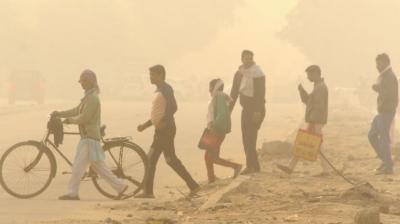 New Delhi: Ahead of the hearing on air pollution in Delhi-NCR, the AAP government has told the Supreme Court that it was ready to take steps like complete lockdown to control air pollution.

The Delhi government has told the top court that such a step, however, would be meaningful if it is implemented across the NCR areas in neighbouring states.

“GNCTD (Government of National Capital Territory of Delhi) is ready to take steps like complete lockdown to control the local emissions. However, such a step would be meaningful if it is implemented across the NCR areas in neighbouring states. Given Delhi’s compact size, a lockdown would have limited impact on the air quality regime.

“This issue would need to be addressed at the level of airshed involving NCR areas. In view of the above, we are ready to consider this step if the same is mandated for the entire NCR areas by the government of India or by the Commission for Air Quality Management in National Capital Region and adjoining areas,” an affidavit filed by the Delhi government said.

The affidavit was submitted in response to a plea filed by environmental activist Aditya Dubey and law student Aman Banka, who sought directions to provide stubble-removing machines to small and marginal farmers for free.

Terming the rise in air pollution in Delhi-NCR an “emergency” situation, the apex court on Saturday suggested clamping a lockdown in the national capital as it asked the Centre and the Delhi government to take immediate measures to improve the air quality.

The court had said the situation of pollution is so bad that people are wearing masks inside their houses.

It had said there are other reasons for pollution such as vehicular emissions, firecrackers and dust, and singling out stubble burning is not the solution.

The apex court had also expressed concern that schools in the city have opened and children are being exposed to severe pollution conditions.