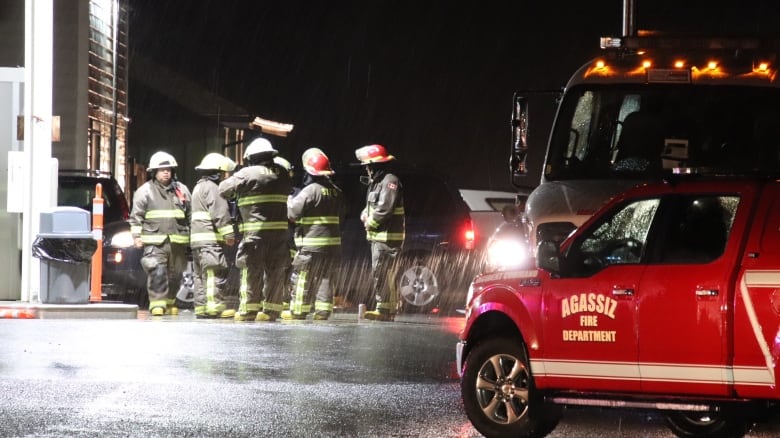 Rain continues to batter British Columbia on Monday, as officials keep a wary eye on rising rivers and road closures.

Rainfall warnings remain in effect across southern B.C., with Environment Canada expecting up to another 50 millimetres for areas that have experienced relentless rain since Saturday.

Mudslides and localized flooding have caused more than 100 homes in Abbotsford, B.C., to be placed on evacuation alerts, while in Merritt, residents living in the 200-year flood plain of the Coldwater River, south of Nicola Avenue, have been ordered to evacuate.

In a brief announcement on its website, the City of Merritt said the municipal wastewater treatment plant had failed and warned all residents against using water in their homes, including flushing toilets and running taps.

An evacuation order has also been issued by the Regional District of Okanagan-Similkameen for 34 properties as the Tulameen River continues to rise dangerously high.

Both Tulameen and Merritt are under flood warnings, as is the area around the Coldwater River near Brookmere.

NOTICE TO RESIDENTS: If you reside in the highlighted zone, you are required to evacuate immediately. <a href=”https://t.co/Sn6xVHfAdF”>pic.twitter.com/Sn6xVHfAdF</a>

A flood watch means residents should be on alert for rising river levels, while a flood warning means river water has breached culverts and flooding will result.

The entire Fraser Valley region was placed on flood watch earlier Sunday, including areas around Hope. Rivers through the region, including the Coquihalla and Chilliwack rivers, are expected to remain high through Monday morning, with improvements expected in the afternoon as rainfall eases.

An evacuation order has also been issued for four properties in Electoral Area E in the Chilliwack River Valley.

Tyler Hamilton, meteorologist with The Weather Network, told CBC Monday an atmospheric river-fuelled storm from the Pacific has “really dug deep into the Fraser Valley.”

He expects Hope will have been hit with more than 300 millimetres of rain by Monday afternoon. The community usually gets about 250 millimetres a month at this time of year.

“It’s no wonder we are seeing rock slides, mudslides  — the small creeks and tributaries that feed into the mighty Fraser River are just simply overwhelmed,” said Hamilton.

As of Monday morning, there are numerous closures and delays on B.C. highways. They include:

Officials believe there are approximately 50 vehicles trapped on Highway 7 between Maple Ridge and Hope, with approximately two to three people in each vehicle.

Adam Wuisman says he’s in one of them and estimates there are up to 300 vehicles stranded around him.

“Everybody’s just pulled off to the side of the road and waiting for some sort of update,” he told CBC’s The Early Edition Monday morning.

Wuisman says he and his fiance have been stuck on that stretch of Highway 7 since 7:30 p.m. Sunday while trying to return to Richmond from Nelson, B.C.

The couple are without emergency supplies, but Wuisman is more concerned about what he says is his precarious position on the highway.

“It’s a hill on one side and the Fraser [River] is just on the other side … I’m not so concerned about blankets. I’m concerned about the higher hillside coming down on me and the rest of us,” he said.

Road conditions are available at www.drivebc.ca.

According to Environment Canada, a significant atmospheric river event will continue to bringing copious amounts of rain to B.C.’s South Coast on Monday.

The central and eastern Fraser Valley can expect another 50 millimetres today, while areas further west, including Metro Vancouver, is forecast to get another 30-40 millimetres.

Alyssa Charbonneau, meteorologist with Environment Canada, said the average monthly rainfall for Vancouver in November is 185 millimetres and she expects to see most of the Metro region reach 200 millimetres by mid-day Monday.

“This is definitely an extreme event,” she said. “To see places receiving about that … over a two day period is definitely very significant.”

In the B.C. Interior, heavy rain is also forecast for Nicola and the Kootenay Lake region.

Environment Canada also issued a winter storm warning for the Trans-Canada Highway from Eagle Pass to Rogers Pass, where 15 to 25 centimetres of snow is expected Monday.

Half a metre of snow has fallen on the high passes since Saturday, the weather agency said.

Rainfall is expected is expected to taper off across most of B.C. by Monday afternoon. However, Environment Canada has also issued wind warnings for the Fraser Canyon, Greater Victoria and Metro Vancouver.

Winds are expected to pick up in those areas in the afternoon with gusts of up to 90 km/h posing a potential risk of road closures and downed power lines.