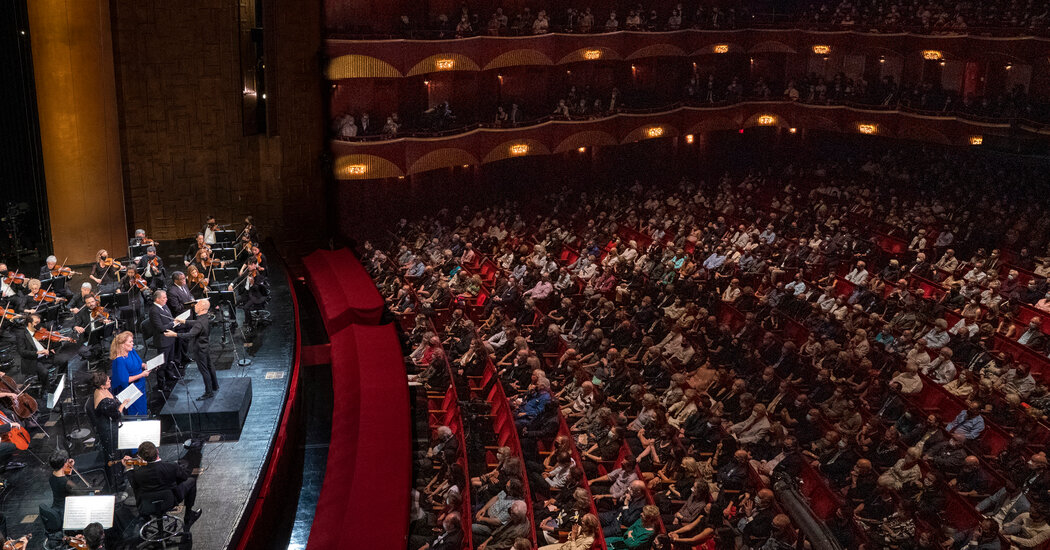 What it meant to be in the audience at the Metropolitan Opera on Saturday evening — for the first indoor performance there since March 2020 — was clear even before the music began.

The theater’s doors had been closed to listeners for 18 months, almost to the day. After standing on lines that extended out into the Lincoln Center plaza and showing proof of vaccination, it felt almost unreal to me to be back in the gilded auditorium for Verdi’s Requiem, the company’s commemoration of the 20th anniversary of 9/11.

As the audience entered, the orchestra musicians were already seated onstage. Then the members of the chorus, wearing face masks, started filing onto the raised rows of seats behind the players.

It began slowly, with some claps here and there. Then built into vigorous applause and bravos. And then whoops, shouts and an exuberant standing ovation. Many choristers wiped away tears. Others touched their hearts or waved in gratitude.

Things calmed down only after the Met’s concertmaster, Benjamin Bowman, came out to lead the orchestra in tuning up. Then, when Yannick Nézet-Séguin, the company’s music director, appeared with the four vocal soloists — the soprano Ailyn Pérez, the mezzo-soprano Michelle DeYoung, the tenor Matthew Polenzani and the bass-baritone Eric Owens — another prolonged standing ovation began.

The past year and a half has shaken the foundations of the performing arts. The fragility of classical music, and all aspects of culture that depend on people gathering, was exposed by the pandemic as never before. The nationwide Black Lives Matter protests last year compelled institutions to look deeper within at issues of diversity, representation and access. And the Met was roiled by bitter labor negotiations that involved long months when its orchestra and chorus were furloughed without pay. Only late in August did the administration come to an agreement with the orchestra that paved the way for performances to begin.

With all that in mind, the overwhelming feeling I had on Saturday was gratitude. To be back inside the Met; to be lifted by the dedication of superb artists; to be hearing Verdi’s great music performed, as it was on this memorable occasion, with beauty and intensity.

For a company that had such a troubled lockdown, the Met has seized the moment in its return. Over Labor Day weekend the orchestra and chorus presented two free performances of Mahler’s “Resurrection” Symphony in Damrosch Park at Lincoln Center — a public expression of reconciliation and renewal. Then, with this Requiem, the Met provided a profoundly meaningful expression of sadness and remembrance during the anniversary of the attacks.

The company distributed 500 free tickets to the families of victims; all other tickets were just $25, and sold out within hours. Audio of the performance was broadcast into the plaza. And PBS carried the event. (But, attesting to what we’ve learned the hard way this year — that live is always better — a glitch disrupted the TV broadcast right at the sublime ending.)

The choristers seemed poignant and vulnerable as they removed their masks to begin this 90-minute score. I felt vulnerable as well, and this performance claimed me from the first moments, when the cellos played the muted, solemn descending first line. Nézet-Séguin gently drew a sighing violin line and plaintive chords from the strings, and the choristers almost muttered the word “Requiem,” as if afraid to say it out loud.

In some ways, Verdi’s Requiem is not quite the right choice for commemorating 9/11. Chilling fears of death and terrified thoughts of Judgment Day and the fires of hell run through the text and music. But Nézet-Séguin emphasized the consoling aspects, taking every chance to bring out subtleties and tenderness in the music. Even in the blazing episodes of the “Dies irae,” with pounding bass drum, vehement brass and frenzied runs in strings, he had the music sounding more grave and biblical, less operatically dramatic. He brought sweep and shape to the passages of steady, inexorable buildup. And in the “Offertorio” he drew out the music’s ruminative elegance.

There were a couple of dicey, slightly uncoordinated moments during the fleet “Sanctus.” But it had all the affirming, assertive spirit you could want. The final “Libera me,” the most inward-looking section of the piece, was magnificent, with an inspired Perez and the great chorus. By my watch, the ovation at the end lasted eight minutes, with especially ardent bravos for the Met’s chorus master, Donald Palumbo, and his charges.

With the Mahler performances and this Requiem, both gifts to the city, behind it, the Met can truly start afresh later this month, when the opera season opens in earnest with Terence Blanchard’s opera “Fire Shut Up in My Bones,” the first work by a Black composer in the company’s history.

But music lovers are already in debt to the Met, and especially to the orchestra players and choristers who have defined this company, season after season.

Performed Saturday at the Metropolitan Opera.