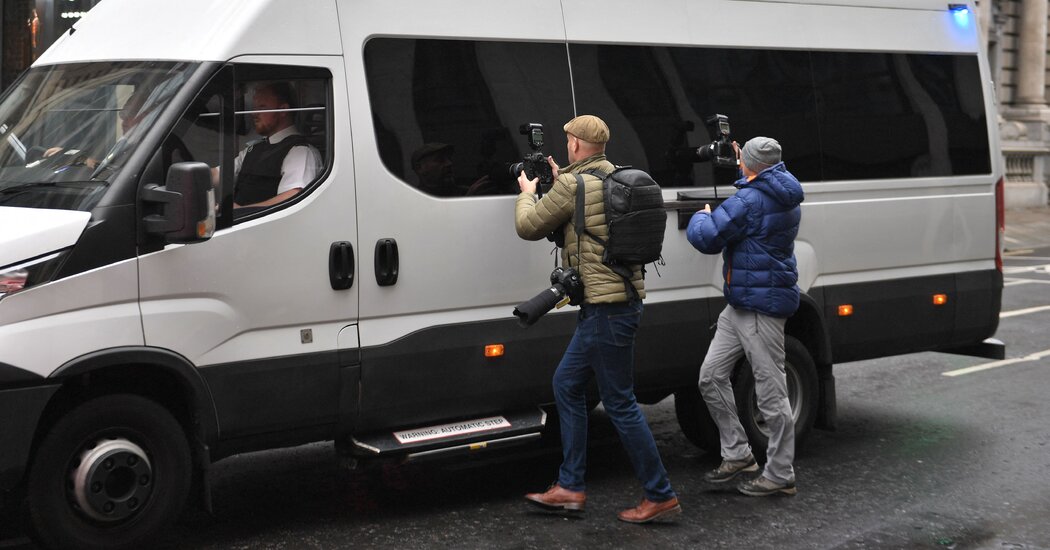 LONDON — The police officer who abducted, raped and murdered Sarah Everard was sentenced on Thursday to life in prison by Britain’s top criminal court, after two days of hearings that reignited outrage at the way London’s police department handles cases involving violence against women.

The sentence was announced a day after prosecutors detailed how the officer, Wayne Couzens, abused his authority and, under the guise of the coronavirus restrictions imposed during a national lockdown in March, deceived Ms. Everard into thinking that she was under arrest. Prosecutors said he used his official credentials, equipment and training to carry out the crime, revelations that shocked rights activists and lawmakers.

Judge Adrian Bruce Fulford, in explaining why Mr. Couzens would not be eligible for parole, said he had “irretrievably damaged the lives of Sarah Everard’s family and friends” and “eroded the confidence that the public are entitled to have in the police force in England and Wales.”

Judge Fulford added that the “misuse of a police officer’s role” justified the steepest possible sentence.

On Thursday there were also renewed calls for the resignation of Cressida Dick, the head of London’s Metropolitan Police, who has been under fire for the department’s response to the killing ever since Ms. Everard’s charred body was found in the woods near Kent last March.

Harriet Harman, an opposition Labour lawmaker and the chairwoman of Parliament’s human rights committee, said she believed it was impossible for Ms. Dick to make the necessary changes in the force.

In a separate letter sent to the government, she called for the suspension of “all serving officers against whom there is an allegation of violence against a woman,” as well as for a number of other measures to overhaul the police.

Ms. Dick, who had been in court throughout the sentencing hearings, acknowledged that public trust in the police had been “rocked” and apologized on behalf of the department.

“As commissioner, I will do everything in my power to ensure we learn any lessons,” she said, speaking outside of the London courtroom on Thursday. She acknowledged that Ms. Everard’s murder and attacks on other women have “raised important questions about women’s safety.”

Ms. Dick added that she was horrified that Mr. Couzens had used his “position of trust to deceive and coerce Sarah.”

Many activists have been critical of what they see as a failure by police to investigate accusations of previous sexual misconduct by Mr. Couzens. The Independent Office for Police Conduct began an investigation this summer into accusations that police in Kent failed to look into reports of indecent exposure by Mr. Couzens in 2015.

The office is also looking into whether London’s police failed to investigate two additional reports of indecent exposure incidents linked to Mr. Couzens in February, just days before Ms. Everard’s murder. Sal Naseem, a regional director from the group, said it could not provide updates on the investigation.

“But following today’s sentencing, we will look to bring those matters to a conclusion as swiftly as possible,” he said.

Prime Minister Boris Johnson said in a statement that the government would do “everything possible to prevent these abhorrent crimes and keep our communities safe.”

“Our police are there to protect us — and I know that officers will share in our shock and devastation at the total betrayal of this duty,” he said. “People must be able to walk on our streets without fear of harm and with full confidence that the police are there to keep them safe.”

After Ms. Everard’s death, the government commissioned a report from an independent watchdog group to review the police response to violence against women and girls in England and Wales. The report, released this month, called for radical changes across the whole system.

Zoë Billingham, an inspector at Her Majesty’s Inspector of Constabulary and Fire & Rescue Services, the watchdog group, told the BBC Woman’s Hour on Thursday that Mr. Couzens’s actions had “struck a hammer blow to the very heart of police legitimacy.”

“We cannot dismiss Wayne Couzens as a one-off, as a rarity, as an aberration,” she told the BBC. “We must see every single police force in England and Wales now stepping forward to tell its communities precisely what it is doing to ensure women are safe.”

Mr. Couzens’s sentencing comes less than two weeks after the killing of another young woman, Sabina Nessa, in southeast London, a case that intensified the calls for better protections for women.

At Wednesday’s sentencing hearing in Mr. Couzens’s case, Tom Little, a prosecutor, revealed new and harrowing details about the March killing of Ms. Everard. Those present, including Ms. Everard’s family, heard how Mr. Couzens went “hunting for a lone young female to kidnap and rape.”

Mr. Couzens confronted Ms. Everard as she walked home from a friend’s house, the prosecutor said, and conducted “a false arrest” to get her into his car.

Mr. Couzens, who was a diplomatic protection officer with the Metropolitan Police, presented a police identity card to Ms. Everard and handcuffed her before driving her out of the city, raping her and eventually killing her and setting her body on fire, Mr. Little said.

Her remains were discovered seven days later in a wooded area in Kent, nearly 80 miles from London. Justice Fulford reflected on Ms. Everard’s likely state of mind during the journey and said what she had to endure was “as bleak and agonizing as it is possible to imagine.”

When Mr. Couzens’s defense lawyer spoke on behalf of his client on Thursday, he said his client did not dispute any of the facts outlined by the prosecution but argued against the possibility of a whole life sentence, citing his guilty plea among other factors.

Judges in Britain are usually obligated to give life sentences to people convicted of murder, but those sentenced to life in prison rarely serve out the entire term behind bars.

There is, however, an exception for the most serious murder cases, when a judge passes a “whole life order,” as was the case for Mr. Couzens. In this situation, the offender must remain in prison for life without any possibility of early release.

Why China Is the World’s Last ‘Zero Covid’ Holdout