A continuing downward trend in royalty payments by Maruti Suzuki to parent Suzuki Motor is unlikely to arrest the decline in the former’s margins.

Lower volumes owing to the shortage of semiconductors and a persistent increase in input costs will keep up the pressure on the company’s margins for the remaining quarters of the year and even next year, said analysts.

Earlier this month it said its vehicle production in September would tumble by 60 per cent.

Following muted Q1 earnings and the production cuts announced by the company owing to the chip shortage, most brokerages have pared their estimates by up to 50 to 100 basis points on margins for FY22 and FY23. One basis point is one hundredth of a percentage point.

Maruti Suzuki India’s royalty payments to parent Suzuki Motor Corp, which used to be investors’ concern till three years ago, touched the lowest in a decade in the financial year ended March 31.

A spokesperson at Maruti Suzuki said the fall in royalty payments was expected.

“Royalty is covered in accordance with the revised agreement approved in January 2018 and accordingly it was expected to come down gradually.” It is payable on the models of Maruti Suzuki and Suzuki Motor Gujarat and on the same terms. The amount depends on the product mix during the year, the spokesperson added.

Maruti Suzuki has a contract-manufacturing agreement with Suzuki Motor Gujarat. 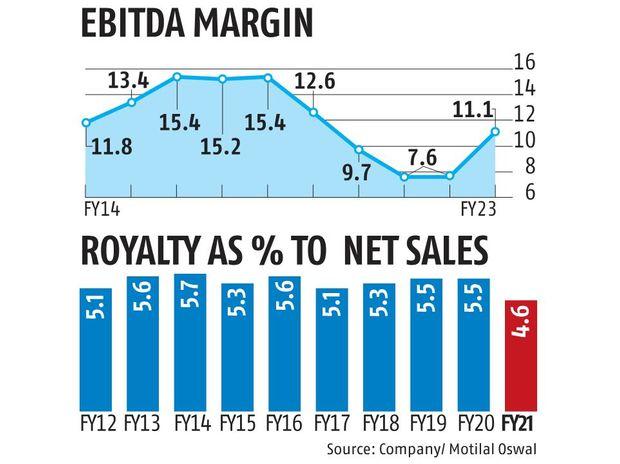 But lower royalties couldn’t help in arresting the steep decline in the company’s Ebitda (earnings before interest, tax, depreciation, and amortisation) margins. A sharp increase in raw material prices, coupled with a contraction in volumes which impacted the company’s operating leverage, erased gains.

“Despite lower royalties, higher commodity prices and lower volumes have impacted margins, which are expected to be under pressure in the forthcoming quarters as the chip shortage deepens,” said Mitul Shah, head of research, Reliance Securities. Cost escalation has been sharp for auto companies but they have been able to pass on the costs only partially, he added. This is set to weigh on the realisations of all of them, he added.

Royalties as a percentage of net sales at the local arm of the Japanese carmaker fell to 4.6 per cent in FY21. This is the lowest since Maruti Suzuki started paying royalties to Suzuki in 2011. They were 9.7 per cent in FY20 and 12.6 per cent in FY19.

The model mix and the rupee’s movement against the yen are the two main factors that govern the payment. The rate tapers off once the model is five years old or reaches the 500,000-unit volume mark.

Maruti Suzuki’s royalties to Suzuki hovered at 5 per cent plus till the former started paying some part of it in the Indian currency in 2018. The payment in rupees hedged the maker of the Wagon R and Baleno models from the currency’s depreciation against the yen. The decline in FY21 was on account of higher contributions of models that attracted lower royalties in the overall mix.

To tide over the steep increase in commodity prices, last week Maruti Suzuki hiked prices by up to Rs 22,500. The hike, the fourth one in the current year, came on the back of an incessant increase in prices of steel, aluminum, palladium, and other metals. The company, which had earlier cut production at its Gujarat plant, said the chip shortage would hit output at the Gurugram and Manesar plants also.

Business Standard has always strived hard to provide up-to-date information and commentary on developments that are of interest to you and have wider political and economic implications for the country and the world. Your encouragement and constant feedback on how to improve our offering have only made our resolve and commitment to these ideals stronger. Even during these difficult times arising out of Covid-19, we continue to remain committed to keeping you informed and updated with credible news, authoritative views and incisive commentary on topical issues of relevance.
We, however, have a request.

As we battle the economic impact of the pandemic, we need your support even more, so that we can continue to offer you more quality content. Our subscription model has seen an encouraging response from many of you, who have subscribed to our online content. More subscription to our online content can only help us achieve the goals of offering you even better and more relevant content. We believe in free, fair and credible journalism. Your support through more subscriptions can help us practise the journalism to which we are committed.