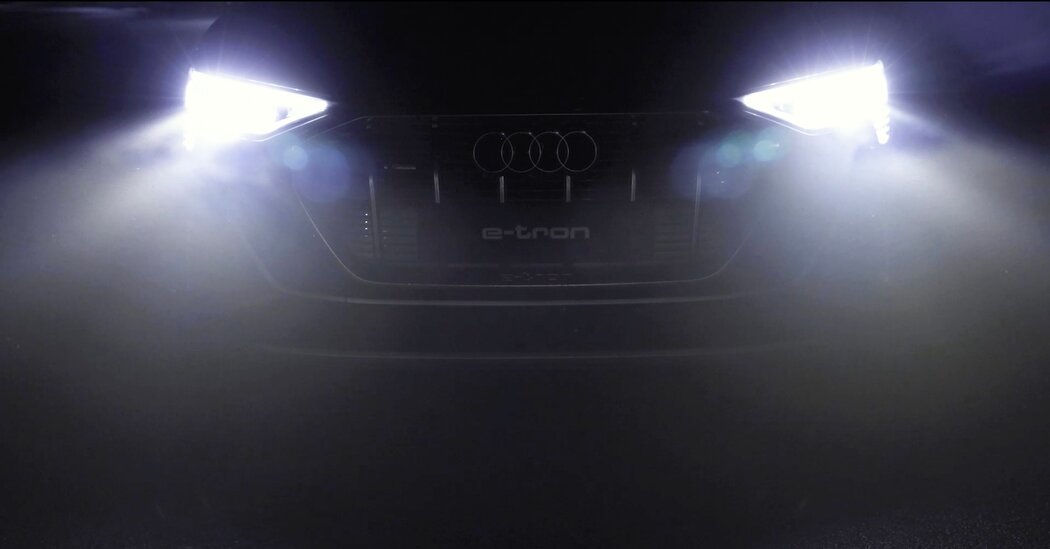 Audi’s digital matrix headlights. “This is our chance to stop lagging behind the standards used around the world,” one expert said.Credit…By STELLA KALININA

I am driving in the California hills high above Malibu, in a deep-blue electric Audi E-tron, and I turn onto a pitch-black winding road. Instinctively, I reach to turn on the high beams. But before I have a chance to do so, the low beams automatically rise and spread out like a hand fan, filling the entire roadway with light and projecting it far into the distance.

A few seconds later, the headlights of an approaching vehicle set my headlights in motion; the high beams angle down as the light continually shape-shifts, changing patterns to avoid illuminating the oncoming car.

I had just experienced adaptive driving beam, or A.D.B., headlights, one of the most important advances in vehicle lighting technology in decades. With A.D.B. lighting, a vehicle’s headlights are essentially always on high beam, while cameras and software instruct them to constantly reshape the beam to avoid blinding oncoming drivers or shining in the rearview mirrors of those close ahead.

The bad news is that while widely used in Europe and Asia for over a decade, these smart headlights are illegal in the United States. On my demonstration drive, I was piloting a not-for-sale-here European model of the E-tron equipped with Audi’s futuristic digital matrix headlighting system.

The good news is that after years of unsuccessful attempts to allow the technology, A.D.B. lights will soon be on American cars and trucks, thanks to a section in the recently passed Infrastructure Investment and Jobs Act that mandates their use.

According to the infrastructure act, adaptive beam headlights must be approved for U.S. use within two years. And they will be allowed to meet the standard developed by the Society of Automotive Engineers, which is very similar to the systems already in use in Europe.

Lives and dollars are stake. Smart headlights are expected to pay off with substantial safety gains, according to a 2019 study from AAA. Widespread adoption would prevent thousands of crashes involving pedestrians and cyclists annually, the report said.

Using federal data from 2015, the study reported about 2,000 pedestrian deaths, and 31,000 injuries, in which alcohol was not a factor but dark or low-light conditions were. It pointed to about 14,000 such crashes involving cyclists. AAA expects that smart headlights would prevent at least 6 percent of these crashes, resulting in thousands of saved lives and over a billion dollars in reduced economic and societal expense.

The report also predicted 18,000 fewer crashes involving wildlife (it noted there were roughly 290,000 a year), saving a further $500 million a year.

The A.D.B. systems ease nighttime driver strain, according to research conducted by Valeo, a major vehicle lighting technology supplier. The company’s study found that driver stress levels, as measured by heart rate variability, declined by 36 percent when A.D.B. systems were used instead of standard low beams.

“Once you drive a vehicle with adaptive beams, you’ll see how great it is,” said Bill Gouse, director of federal program management for SAE International, a standards-setting organization. “With A.D.B., you’ll no longer have to look off at a tree to save your vision because someone is coming toward you with their high beams on. This is our chance to stop lagging behind the standards used around the world.”

The number of beam patterns offered by A.D.B. systems differs, based on each carmaker’s technology. General Motors autos in China equipped with A.D.B. can create 34 beam patterns, while digital systems from Audi and Mercedes-Benz use millions of micromirrors to create a virtually infinite number of shapes.

The Infrastructure Bill at a Glance

Transportation. The proposal would see tens of billions of dollars in new federal spending going to roads, bridges and transportation programs. Amtrak would see its biggest infusion of money since its inception, and funds would be allocated to programs intended to provide safe commutes for pedestrians.

Climate. Funding would be provided to better prepare the country to face global warming. The Forest Service would get billions of dollars to reduce the effects of wildfires. The bill includes $73 billion to modernize the nation’s electricity grid to allow it to carry renewable energy.

Resources for underserved communities. A new $2 billion grant program is expected to expand transportation projects in rural areas. The bill would also increase support for Native American communities, allotting $216 million to the Bureau of Indian Affairs for climate-resilience and adaptation efforts.

Audi’s digital matrix headlights, currently available (but deactivated) on the U.S. version of its E-tron, can also create a bright light “carpet” on a highway, illuminating the lane ahead, widening to show the way when the car is changing lanes, then shrinking back once the lane change is complete.

This light carpet “helps drivers to anticipate bends and stay in their lane,” said Stephan Berlitz, Audi’s head of lighting development. “By visualizing the position of the vehicle in the lane, the lighting function is particularly helpful where the road narrows.”

One added attraction that does work in the U.S. version: the ability to project one of five animations when locking and unlocking the vehicle. Radar detects whether there’s a wall in front of the vehicle and directs the image to it or to the ground, resolving distortion and height when needed.

The changeover to A.D.B.-capable headlamps could be swift for some drivers who own Audi, BMW or Mercedes models with deactivated units. Once the A.D.B. standard is approved, it’s possible that a simple software upgrade will activate them.

Some owners who could not wait for legalization say they have figured out how to activate their matrix headlights, and at least one aftermarket service dealer in Southern California will turn them on for $900.

Adaptive beam headlights could be just the beginning of advanced vehicle lighting developments. In Germany, Audi’s digital matrix headlights can already identify and illuminate a pedestrian in the road. In the future, in conjunction with the vehicle’s navigation system, the lights could cast a large arrow in front of the vehicle directing the driver where to exit the highway.

Valeo is developing a system that uses artificial intelligence to adapt a vehicle’s headlights to the age of the driver, reducing glare, for example, for older drivers who are more sensitive to it.

For automotive lighting experts, the day that A.D.B. systems are approved can’t come soon enough. “Once you drive a vehicle with adaptive beam headlights, you won’t want to go back,” said Michael Larsen, G.M.’s technical fellow for exterior lighting.