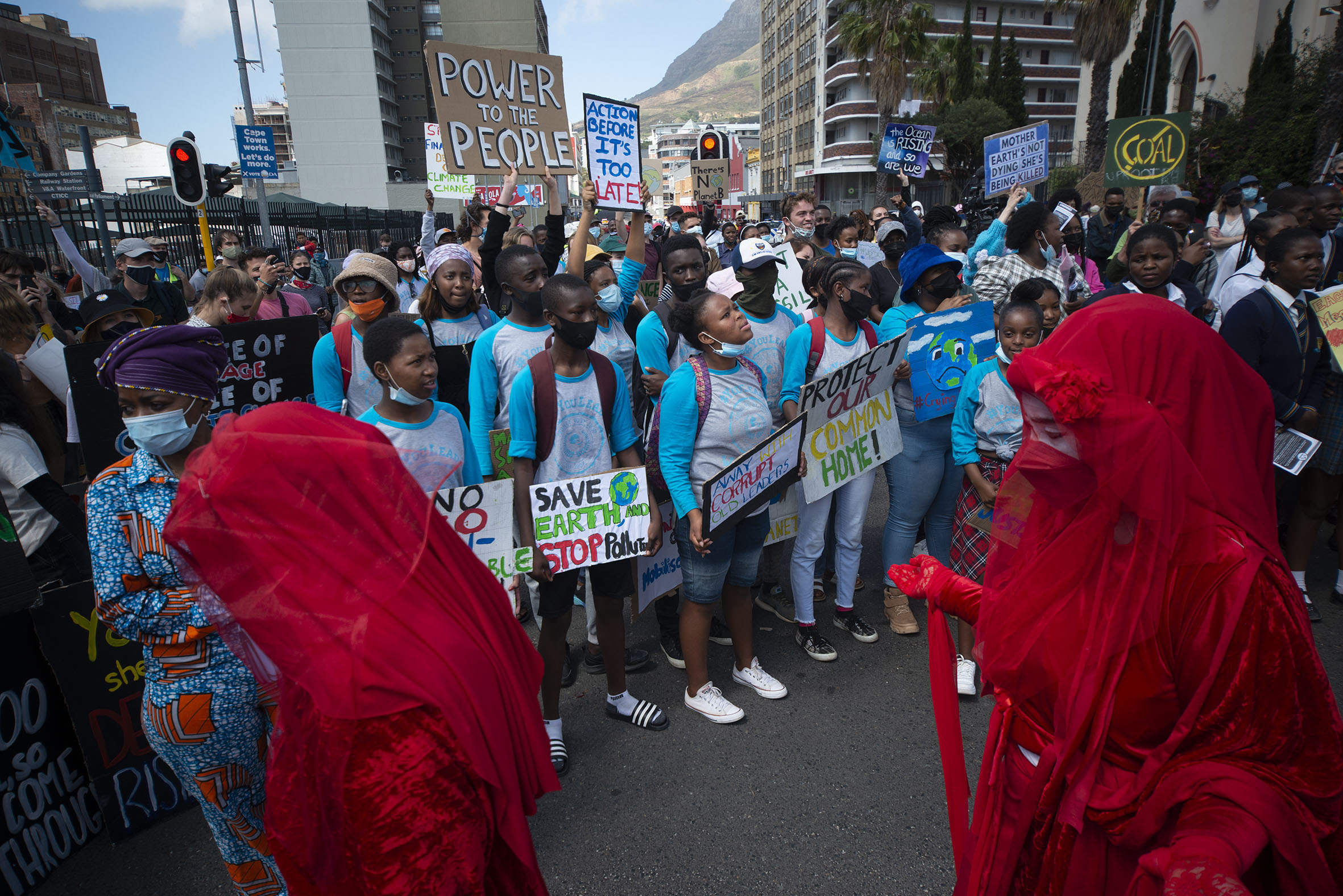 Swedish teenager Greta Thunberg didn’t attend school on 20 August 2018. Instead, she protested for climate action outside her country’s parliament. Her activism sparked a global movement, Fridays for Future, when young people around the world protested against energy driven by fossil fuels and demanded action on the climate crisis.

Although widely celebrated, Thunberg and her campaign also drew the attention of abusive online users and trolls, including political leaders such as then US president Donald Trump. As more young activists joined the protest, the hate and abuse grew.

When climate protesters in South Africa marched to parliament on Heritage Day to demand action on climate change, they were received with the same hostility.

Witnesses said an ANC official accepted the memorandum before allegedly accusing the protesters of “sowing divisions” in the country.

The group was also told that their campaign did not “represent the constituencies it claimed to”, according to strike leader and Africa Climate Alliance convenor, Gabriel Klaasen.

The M&G identified the official as chairperson of the portfolio committee on Public Enterprises and ANC MP, Khaya Magaxa.

Young people who participated in the march said the crowd comprised climate-affected people, labour and other organisations, although few were branded.

“One would expect officials … to mention their commitment to securing our future and delivering the demands to the correct persons — even if it were a lie. But to be told that we, an intergenerational and cross-cutting mobilisation of civil society — including workers, communities and youth — are the problem because of ‘division’ was extremely upsetting,” Klaasen said.

“For far too long we have been fed lies and told change is coming. But what we saw was a glimpse of the truth and exactly why we were calling to uproot the DMRE [department of mineral resources and energy] and uproot the system.”

When asked about the comments from MPs receiving the memorandum, another striker, who wished to remain anonymous, said they felt disbelief. “It was quite shocking for us to hear such claims when we are working toward a united youth that works for the people and is by the people,” they said.

“I, personally, felt that the lashing out could’ve been for two reasons: to plant seeds of doubt about [our] work … or it was a targeted response in what I can only think of as panic. Here you have adults being called on account by youth and we’re saying we won’t stand for it,” they said.

“​​Mobilisation was also part of a greater action which included workers and community members, not just youth. It appears that some of the officials did not get informed about this, if they had, the tone may have been different,” they added.

Magaxa told the M&G that he and two other MPs accepted the memorandum on behalf of the speaker and the ANC chief whip’s office. He said they welcomed and supported the campaign, but warned the crowd not to polarise the subject.

Magaxa was not happy about the Democratic Alliance being invited by the protesters as a party, while he and others were there to represent parliament.

“On the sidelines, I asked why they didn’t invite the ANC as an organisation, if they invited the DA … We are treated like we are representing parliament — so we were treated unfairly. He said that he told the marchers to avoid politicising the issue and encouraged them to invite workers and the labour movement.

Magaxa said that the crowd did not take well to his calls, and felt that his response was in line with his suspicions that its members represented another party. “We know the DA’s attitude towards [trade union federation] Cosatu”, adding that he could not take on children because he “understands their limitations of understanding”.

The march this past Friday was an end to a week-long campaign in which activists occupied the department’s offices in all nine provinces under the banner “Uproot the DMRE and Minister Gwede Mantashe”. They accused the minister and his department of blocking South Africa’s energy transition by staying committed to new fossil fuel development.

The memorandum of demands cited UN secretary general Antonio Guterres who, in reaction to the latest scientific assessment on climate change, called it a ‘code red for humanity’. It demanded an end to all new procurement of coal and an improved commitment to cut emissions in South Africa.

“The scientific evidence is clear that there can be no further complacency on the part of South African political leaders on dealing with the climate and ecological crisis especially in the lead up to COP26,” the memorandum said.

Organised by the Climate Justice Coalition, campaigners erected an artificial scene of bodies outside the department’s offices to highlight the risks to peoples’ lives if fossil fuel developments continued.

The Civicus Monitor, a research tool that provides data on the state of civil society and civic freedoms in 196 countries, said in a report that the youth climate movement has been no exception to the suppression of voices of dissent.

“In many countries, young people and children not only face societal and political pressure and discouragement but also legal barriers that prevent people under the age of 18 from protesting. In the US, youth climate strikers outside the UN in New York have faced repeated questioning from the New York police department and in August 2019, a 13-year-old student was arrested in Seattle for using chalk to paint signs for a climate strike on the pavement,” it said.

The authors said the online space had helped new climate movements organise, recruit support and share solidarity but it had also become a place where they experienced harassment.

“Even as Greta Thunberg was sailing across the Atlantic, with only a satellite phone for communication, she and other youth climate activists were targeted by climate deniers. Prominent adults, including conservative media commentators and journalists, as well as anonymous trolls and bots, have directed persistent and targeted harassment towards the student strikers,” researchers said.

The UN Climate Conference (COP26) in Glasgow, Scotland, gets underway in November, and civil society groups have called for an end to the clamp-down on activism and dissenting voices at the high level climate talks, including limitations on the right to protests and access to the talks.