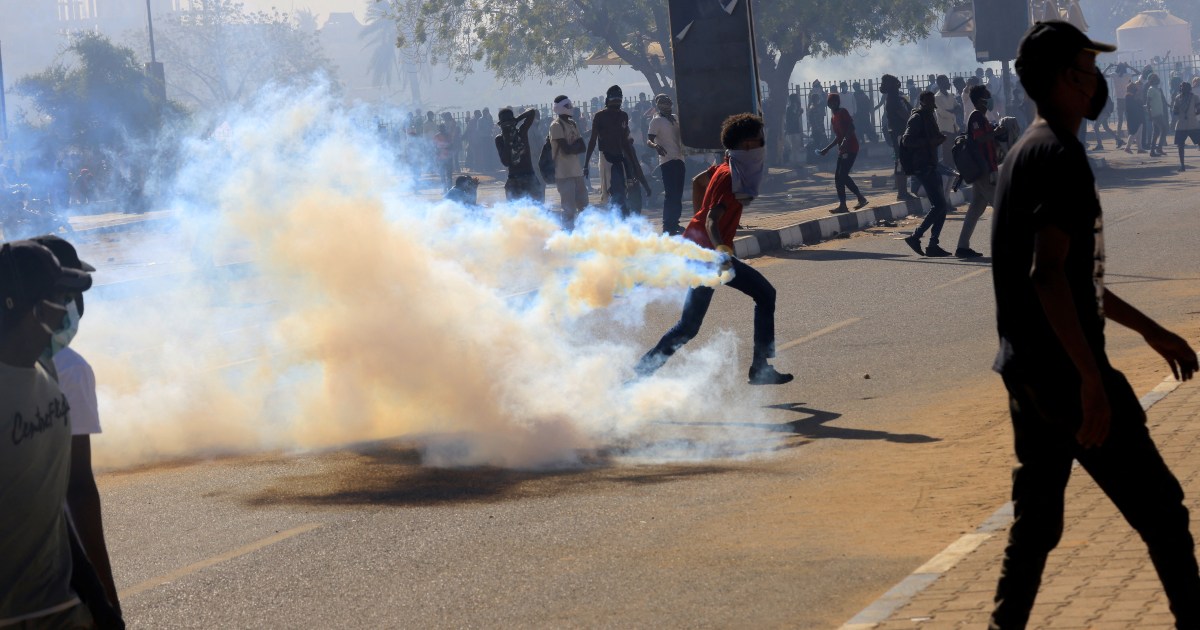 The two were killed by live bullets in Omdurman while thousands march towards presidential palace in Khartoum.

The Central Committee of Sudanese Doctors (CCSD) said one of the protesters was shot in the chest while the second suffered a “severe head wound”.

The incident comes as security forces fired tear gas at thousands of protesters in Sudan’s capital Khartoum, televised images show, as demonstrators march towards the presidential palace in the 12th round of major protests since a coup on October 25.

As with previous demonstrations, which have become regular since the coup, authorities have erected roadblocks, with shipping containers blocking Nile River bridges between the capital and outlying areas.

Rallies have been repeatedly broken up by security forces firing rounds of tear gas, as well as charges by police wielding batons.

Sunday’s protests came after six people died and hundreds were injured in nationwide demonstrations against the military rule on Thursday. The death toll since the security forces’ crackdown began in October is now 56, the CCSD said.

The military took power in an October 25 coup that ended a power-sharing deal with civilian political forces. That deal, agreed in 2019, was supposed to pave the way for a transitional government and eventually elections following the overthrow of longtime leader Omar al-Bashir.

Protests against military rule have continued even after Abdallah Hamdok was reinstated as prime minister in November.

The demonstrators have demanded the military play no role in government during a transition to free elections.

Some people managed to post images on social media showing protests in several other cities, including Ad-Damazin and Port Sudan.

Al Hadath TV quoted an adviser to military leader Abdel Fattah Al-Burhan as saying the military would not allow anyone to pull the country into chaos and that continued protests were a “physical, psychological, and mental drain on the country” and “would not achieve a political solution”.

In a televised speech on Friday, Burhan said disputes about power and the loss of lives meant everyone “should use the voice of reason”.

“The only way to rule is by popular mandate through elections,” Burhan said.

Sudan’s Sovereign Council, which Burhan leads, denounced on Friday the violence that accompanied Thursday’s protests, adding it had ordered authorities to take all legal and military measures to avoid a recurrence and “nobody will go unpunished”.

Last week, the council reinstated powers of arrest and detention to the intelligence service.

Activists have said 2022 will be “the year of the continuation of the resistance” in posts on social media.

They demand justice for those killed since the coup as well as the more than 250 who died during the mass protests that began in 2019 and paved the way for the toppling of Bashir.

Activists have also condemned sexual attacks during December 19 protests, in which the UN said at least 13 women and girls were victims of rape or gang rape.

The European Union and the United States issued a joint statement condemning the use of sexual violence “as a weapon to drive women away from demonstrations and silence their voices”.