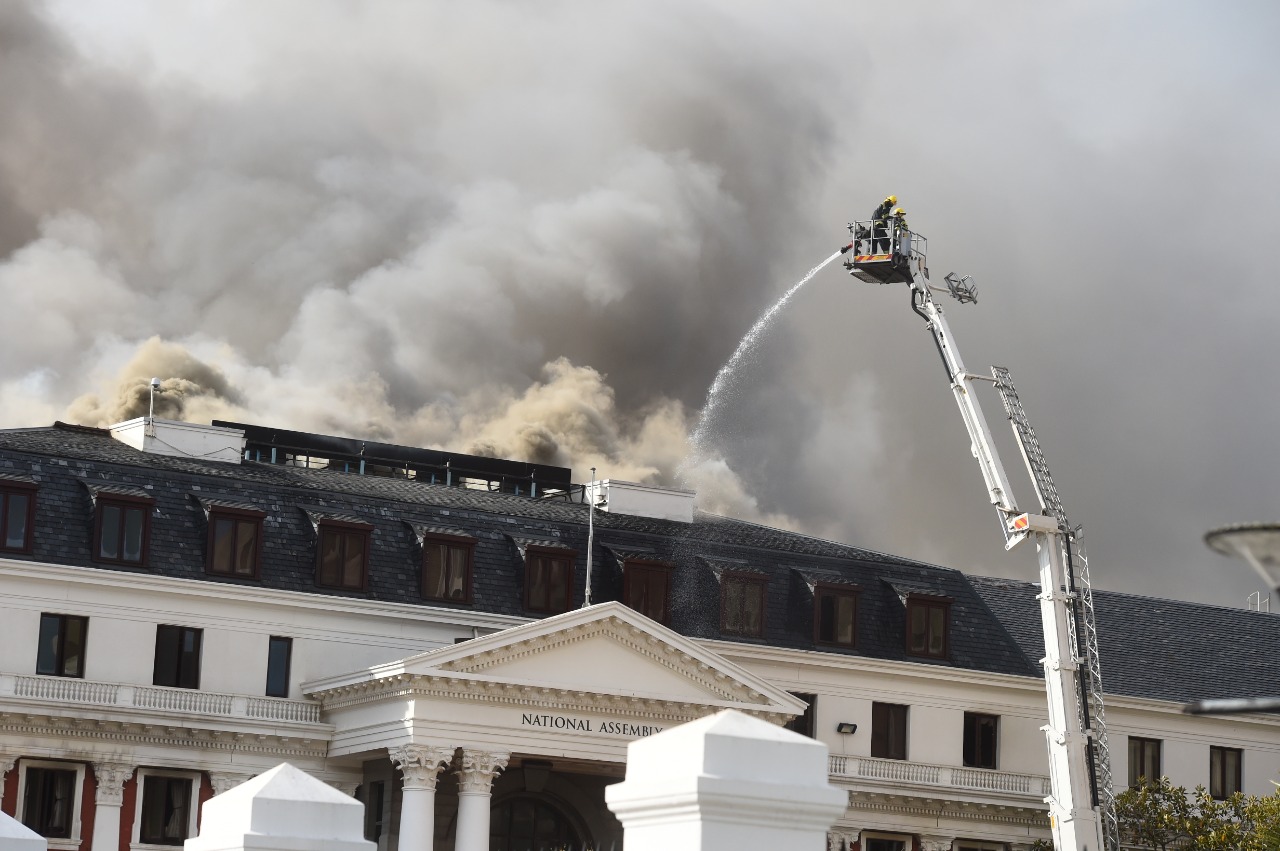 The department of public works and infrastructure says maintenance and the security system in parliament were up to date as at 21 December 2021 after a power failure in the Cape Town city centre.

This came up during a meeting on Tuesday 4 January of the joint standing committee on the financial management of parliament to discuss the preliminary findings on a devastating fire which broke out in the parliament precinct on Sunday.

The blaze ravaged the Old Assembly section of the legislature and collapsed the ceiling of the national assembly. A second fire flared up on the roof on Monday but has since  been quelled.

The National Council of Provinces (NCOP) chamber and offices, the parliament library, museum, artworks and the ground floor of the old assembly building have not been affected by the fire, NCOP chairperson Amos Masondo told the joint committee. He appealed for calm and caution against speculation ahead of further reports.

The Mail & Guardian previously quoted national assembly speaker Nosiviwe Mapisa-Nqakula as saying the task ahead was to find an alternative venue for President Cyril Ramaphosa to deliver his state of the nation address (Sona) scheduled for 10 February.

On Tuesday, Public Works and Infrastructure Minister Patricia de Lille said two options for alternative accommodation were being considered, although nothing had been finalised. The Cape Town International Convention Centre has been offered, while  Cape Town Mayor Geordin Hill-Lewis offered the City Hall and the council chamber.

A fire expert to work with the forensic team has been appointed to determine the cause and where the fire originated.

The next step now is for the Cape Town government to hand over the building to the police for further investigations because “it is a crime scene”, De Lille said.

The national director of public works and infrastructure, Thembeka Kolele, stressed that maintenance was up to date prior to the fire.

“Our systems were working as intended, and were tested late in December,” public works acting director general Imtiaz Fazel added.

MPs said the report on preliminary findings was not comprehensive. They said there was no way “all systems were in place” if an intruder was in the precinct for hours undetected and considering the extent of the fire damage before emergency services were dispatched.

A suspect, Zandile Christmas Mafe, 49, has appeared in the Cape Town magistrate’s court on charges including arson. Mafu pleaded not guilty to the charges and the case has been postponed to 11 January.

A meeting of the joint standing committee on the financial management of parliament will reconvene when the interim report is available within seven days.

To Hippos, a Wheeze and a Honk Mean More Than Just ‘Hello!’ [Video]