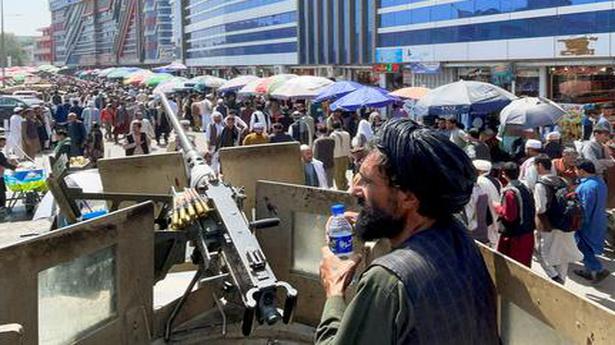 Four days after announcing that the Indian government has held talks with the Taliban in Doha, Foreign Secretary Harshvardhan Shringla said the Taliban thus far had been “reassuring” and “reasonable”, and also indicated that there had been more than one such engagement with the group that has claimed power in Afghanistan.

“I think they [Taliban] have…made reassuring noises from their side. Our engagement with them has been limited, and it’s not that we have a robust conversation. But for whatever conversations we’ve had so far, the Taliban seem to indicate that they will be reasonable in the way they handle things,” Mr. Shringla told journalists during his visit to Washington on Friday.

According to the government’s statements, the meeting with Taliban Political Office chief Muhammad Sher Abbas Stanekzai and Indian Ambassador to Qatar Deepak Mittal on Tuesday, was held at the Indian Embassy at the Taliban’s request. Officials indicated that it was part of the Taliban’s desire to reach out to countries with an interest in Afghanistan.

While giving no details of the Taliban’s requests during the meeting, the MEA said India had brought up the safety of Indian nationals and Afghan minorities wishing to visit India, as well as India’s concern that Afghan soil should not be used for anti-Indian activities and terrorism in any manner.

Despite the sanguine approach, officials tell The Hindu they are watching events surrounding the government formation in Afghanistan very closely for signals that could indicate more worries for India.

To begin with, the delay in government formation by the Taliban, which claimed Kabul and took control after the sudden departure of former President Ashraf Ghani on August 15, could indicate that the Haqqani group, that has often targeted Indian interests and conducted brutal suicide bombings on the Indian embassy in 2008-2009, is jockeying for a bigger role in the government.

The differences appear to be between the ‘Helmandis’ as the Taliban led by Haibatullah Akhundzada and his deputy Abdul Ghani Baradar are known, and the ‘Haqqanis’, which include its leader Sirajuddin Haqqani, Khalil Haqqani and Anas Haqqani. The latter have become more prominent in the past few weeks, as the Haqqani militia took control of Kabul.

“India should be worried if the Haqqanis get their way, as that will curtail any plans for Indian diplomacy. It will be difficult for India to have on ground presence if a group as controlled by Pakistan and inimical to India takes major positions in the government,” said Kabir Taneja, senior fellow of the Observer Research Foundation, and author.

The arrival of ISI Chief Faiza Hameed in Kabul on Saturday, reportedly at the invitation of the new Taliban regime, to witness the announcement of the government has surprised many, particularly as it indicates that it is Pakistan’s military not the civilian government that is attending the occasion, and was met with some consternation in Kabul as well.

“Today we see the ISI chief arriving in Kabul as part of a delegation overseeing the government formation. We hear Pakistani ministers speak as if they represent the government of Afghanistan as well as Pakistan,” said former Minister Nargis Nehan, who participated in an online discussion held by the Kautilya School of Public Policy, from Oslo, where she fled to last month.

When asked, Mr. Shringla said that U.S. officials were, like India “watching carefully and watching Pakistan’s actions with a fine toothcomb”. In particular, the government will not be comfortable if the Pakistani “advisory” presence in Kabul becomes a more permanent one, say officials, as commitments that the Taliban may give on not allowing anti-India terror groups like the Lashkar-e-Taiba and Jaish-e- Mohammad, believed to be present already in Khost and Helmand, would not amount to much.

Comments made by various Taliban leaders on the issue of Kashmir, have been confusing. On Friday, Taliban spokesperson Suhail Shaheen said the Taliban “have the right to raise their voice for Muslims in Kashmir”, India or any other country. “We will raise our voice and say that Muslims are your own people, your own citizens. They are entitled to equal rights under your laws,” he was quoted as saying by BBC Urdu. The statement came after several other Taliban leaders and Shaheen himself had spoken of a desire to build “neighbourly” relations with India, promising not to interfere in “bilateral disputes”.

Another worrying signal would be the new government’s engagement with China, especially after Taliban spokesperson Zabiullah Mujahid’s statement that the new government hopes to “rely on funding” from Beijing, which is “ready” to rebuild the Afghan economy.

For the moment with the government formation, New Delhi would want to see if there is a presence of non- Taliban leaders, which would indicate that talks between the Taliban and leaders like Hamid Karzai and Abdullah Abdullah towards a more inclusive government had made some progress. The presence of women in any official positions would indicate that the Taliban hopes to reassure the international community, at least in this interim government.

Above all, Mr. Shringla said India would take a “wait and watch” approach to recognition for a Taliban government, based on the decision of the international community. However, with the international community clearly divided between U.S., UK and Western countries who have moved their embassies to Doha for now, and Russia, China, Iran, Turkey and Qatar that have kept embassies in Kabul open and are actively engaging the Taliban, consensus over engaging the government in Afghanistan maybe as difficult as consensus amongst the members of the new regime in Afghanistan appears to be at present.

(with inputs from Sriram Lakshman in Washington)