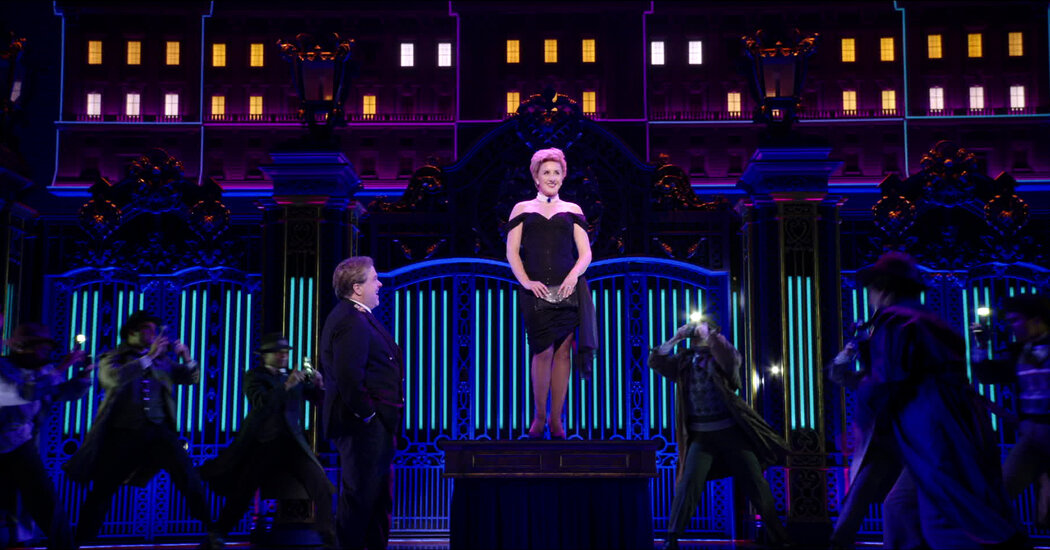 Every month, streaming services in Australia add a new batch of movies and TV shows to its library. Here are our picks for October.

The writing and composing team of David Bryan and Joe DiPietro — who won four Tonys, including Best Musical, for their show “Memphis” — reunite for this high-energy, rock ’n’ roll fueled version of the Princess Diana saga. Jeanna de Waal plays the popular, scandal-plagued royal, in a story about her seemingly storybook romance with Prince Charles (Roe Hartrampf) and its unhappy ending. “Diana: The Musical” officially opens on Broadway later this year, but the cast and crew taped a performance over the summer, giving theater fans who can’t make it to New York a chance to see the show.

In this taut mystery-thriller, Jake Gyllenhaal plays a dedicated but overzealous police officer, who is stuck working at a dispatch desk when he gets a call from a woman (Riley Keough) who claims to be in fear for her life. The director Antoine Fuqua and the screenwriter Nic Pizzolatto follow the lead of the intense 2018 Danish film on which “The Guilty” is based, telling the story mostly from inside the police station. The hero scrambles to use all the investigative resources available to him from his computer and his phone, to try to figure out how to stop what may or may not be a crime in progress.

Based on Stephanie Land’s memoir, the mini-series “Maid” stars Margaret Qualley as a broke single mother named Alex, with very few viable options for work, child-care or safe housing. When she takes a job working for a cleaning service catering to wealthy families in the Pacific Northwest, Alex becomes acutely aware of how much her survival depends on a steady paycheck and a lot of good luck. Qualley gives an outstanding performance in this riveting drama, which turns something as simple as having gas money (or a functioning car) into a source of nail-biting tension.

‘There’s Someone Inside Your House’

The director Patrick Brice (best-known for the offbeat genre films “Creep” and “Corporate Animals”) and the screenwriter Henry Gayden (who co-wrote the lively superhero movie “Shazam!”) have adapted Stephanie Perkins’s young adult novel “There’s Someone Inside Your House” into a different kind of teen horror movie. Sydney Park plays Makani, the new girl at a Nebraska high school where students with dark secrets are being stalked by a serial killer who wears a mask that resembles the victims’ faces. While these kids try to dodge murder, they also hustle to avoid having their deepest regrets made public.

One of 2020s most delightful surprises returns for a second season of family-friendly television. Based on Ann M. Martin’s beloved book series, “The Baby-Sitters Club” is about a circle of industrious teenage friends who run a child-care business while also helping each other with their problems. The show uses the plots of the novels as a starting point for modern stories about school, parents, relationships and responsibility.

The Colin in the title of “Colin in Black & White” is Colin Kaepernick, the former NFL quarterback and social activist who sparked controversy across the United States when he started kneeling before football games during the singing of the national anthem. Here, Kaepernick and the producer-director Ava DuVernay tell the athlete’s story by looking back at his childhood, revisiting moments when the biracial Colin (Jaden Michael) came into conflict with his coaches, his classmates and his adoptive white parents (played by Nick Offerman and Mary-Louise Parker) as he tried to embrace his cultural roots.

This Canadian dramedy stars Bilal Baig as Sabi, a gender-fluid child of Pakistani immigrants. While working as a nanny by day and a bartender by night, Sabi tries to maintain meaningful relationships with both their traditionalist family and their L.G.B.T.Q. friends — two very different factions who are sometimes equally confounded by what it means to be nonbinary. This is a show about a person making a space for themselves, outside of the conventional categories.

Like the Karen M. McManus young adult mystery novel on which it’s based, the teen drama series “One of Us Is Lying” is part “The Breakfast Club,” part “Gossip Girl” and part Agatha Christie whodunit. When five students are framed by a troublemaking peer and stuck in after-school detention, four of them become murder suspects after one of their group — an incorrigible gossip named Simon (Mark McKenna) — drops dead under strange circumstances. To clear their names, the other kids work together, forming an “us against the world” bond as their secrets become public.

Looking for some classic horror this October? You can’t go wrong with 1982’s “Poltergeist,” a witty and frightful tale about ancient spirits terrorizing a pristine new suburban subdivision. Directed by Tobe Hooper (best-known for “The Texas Chain Saw Massacre”) and produced and co-written by Steven Spielberg (riding high at the time from the success of “Raiders of the Lost Ark” and “E.T.”), “Poltergeist” starts out as a dryly funny portrait of a pleasant middle-class family. Then all hell breaks loose, turning an ordinary American neighborhood into a village of the damned.

The romantic comedy anthology series “Love Life” returns for a second season with a new story, featuring a few of the first season’s characters in smaller roles (including last year’s protagonist Darby, played by the show’s co-producer Anna Kendrick). This time out, William Jackson Harper takes the lead as Marcus, a New Yorker still reeling from a recent divorce from the woman he thought would be his partner for life. As he re-enters the dating world, which has changed drastically since the last time tried to find a mate, Marcus takes the opportunity to re-evaluate what he really wants from a relationship.

‘Welcome to the Blumhouse’ Season 2

The second round of original feature-length horror films for Blumhouse Productions’ anthology series “Welcome to the Blumhouse” follows a slightly different formula from last year’s batch. The movies “Bingo Hell” (about senior citizens protecting their gentrifying neighborhood from a demonic villain), “Black as Night” (about a New Orleans teen hunting vampires who prey on the homeless), “Madres” (about Mexican American migrant workers plagued by terrifying premonitions), and “The Manor” (about a nursing home under siege from supernatural forces) put unique twists on conventional genre fare, telling stories about people on society’s margins who battle insidious evils.

‘I Know What You Did Last Summer’ Season 1

Based on a 1973 Lois Duncan horror novel (and its hit 1997 movie adaptation) the teen slasher series “I Know What You Did Last Summer” follows a group of high school friends and acquaintances whose lives change after a terrible accident. As a serial killer targets the kids involved in a fatal car wreck, they realize they have to abandon their carefully crafted public personas so they can solve the mystery of who knows their terrible secret.

In this edgy animated satire, the voice actors Skyler Gisondo, Kiersey Clemons, Peter Kim and Jaboukie Young-White play a group of Los Angeles teens who dedicate most of their energy and talent to becoming social media influencers. “Fairfax” is partly a knowing look at plugged-in American youth in the 2020s, and partly an absurdist comedy in which the pursuit of clout frequently turns into surreal adventures.

Lalu Yadav can get me shot, but cannot do anything else: Nitish Kumar