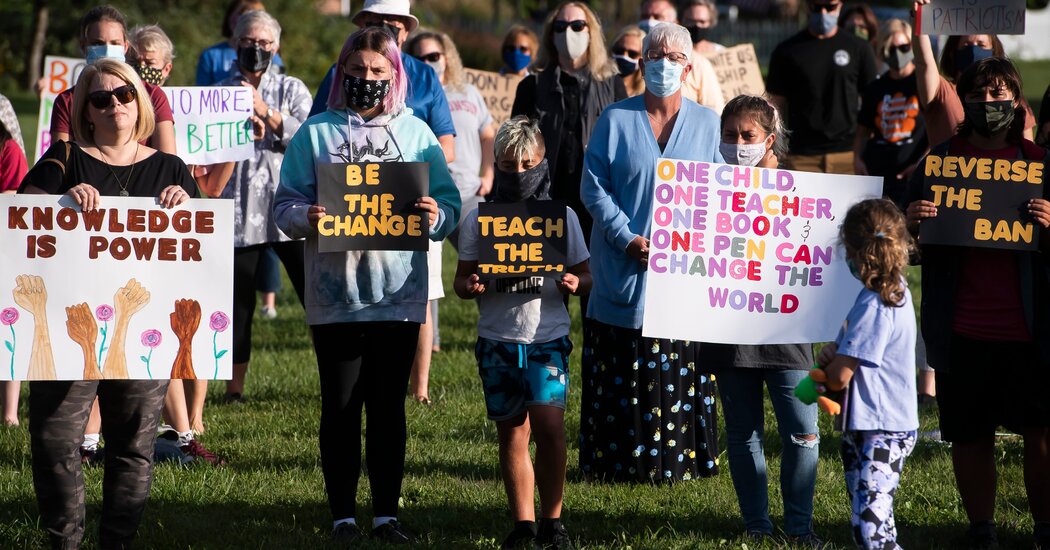 This is the Education Briefing, a weekly update on the most important news in U.S. education. Sign up here to get this newsletter in your inbox.

Today, we’re covering one community’s fight over a book ban and the success of New York City’s vaccine mandate for nearly all public school employees.

The fight over critical race theory has reached the library, as some parents try to ban books that address certain ideas about race, as well as those that address sex and L.G.B.T.Q. issues.

In one recent example from York County, Pa., hundreds of students and teachers won a battle, at least temporarily, against a ban on a selection of books told from the perspective of gay, Black and Latino children.

Here’s the back story: In August 2020, a diversity committee created a list of hundreds of books, documentary films and articles, meant as a resource to help students and teachers grapple with the racial and social turmoil.

Some parents objected. They claimed the materials could be used to “indoctrinate” students or make white children feel guilty. So, in a little-noticed vote last November, the school board banned the all items on the list from classrooms.

At the start of this school year, many teachers were outraged. Students were, too. They protested daily outside school, wrote letters to the local paper and read excerpts from the banned books on Instagram. Local and national news media picked up the story.

After some back and forth, on Sept. 20, the board temporarily lifted the freeze.The York ban was largely symbolic: None of the listed books had been removed from school libraries and teachers already using them were not affected..

In Texas, which has a ban, the Katy school district removed books about young Black boys written by an award-winning Black author, Jerry Craft.

The district also canceled an event with Craft, planned for this week, after parents claimed his books promoted critical race theory.

In Tennessee, a group that calls itself “Moms For Liberty” is trying to use that state’s ban to remove a book written from the perspective of Mexican Americans.

Resources and other censorship news:

About 95 percent of all full-time school employees have received at least one dose of a vaccine, Mayor Bill de Blasio said. That shakes out to 99 percent of principals, 96 percent of teachers and 94 percent of other staff.

The shots accelerated after the city announced the mandate in late August: Since then, health care workers administered roughly 43,000 doses, including more than 18,000 since Sept. 24. (About 150,000 people work in the nation’s largest school system.)

As with all vaccine mandates, New York encountered resistance: About 8,000 unvaccinated people who work in the school system were placed on unpaid leave, officials said on Monday.

“We have a lot of talented young people who are ready to take those jobs,” de Blasio said.

Legal challenges have failed or stalled, too.

One lawsuit, filed by a coalition of unions, was unsuccessful. A group of teachers filed a separate legal mandate, seeking at least a temporary injunction. But Justice Sonia Sotomayor denied their petition to the U.S. Supreme Court on Friday, after two federal courts also denied the request.

The mandate has even increased vaccination rates among members of District Council 37, a union that led the legal and political charge against the mandate. (The union includes school lunch aides, support staff and crossing guards.) A spokeswoman said that 93 percent of its members had now received at least one dose, up from 68 percent last month.

Tell us about your favorite children’s books

Millions of students across the country are struggling to meet grade level literacy requirements, and a great story can help even the most tentative reader power through.

We want to know about a children’s book you love, and why. Use this form to submit your suggestions. Thank you!

On your way out, check out this smart analysis from The Drift, on the flurry of less than imaginative political biographies for kids. See you next week!

Sign up here to get the briefing by email.

Anni Bergman, Therapist Who Listened to Children, Dies at 102

FYUP likely to be implemented in all central universities