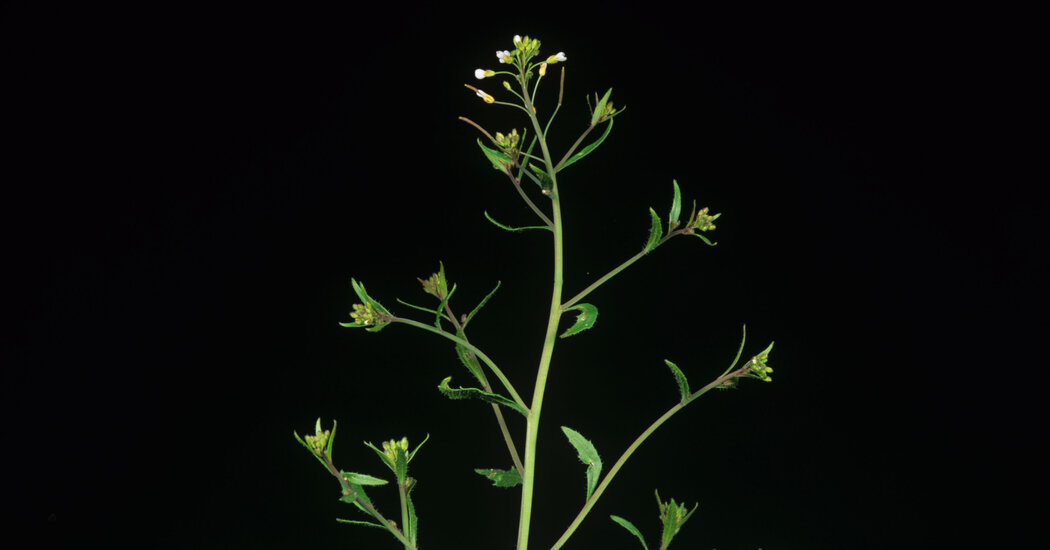 A mustard plant infected with a certain parasite grows strangely, its development warped by tiny invaders. Its leaves take on odd shapes, its stems form a bushy structure called a witches’ broom and it may grow flowers that do not produce seed. Most peculiarly of all, it lives longer than its uninfected brethren, in a state of perpetual adolescence.

“It looks like it stays in a juvenile phase,” said Saskia Hogenhout, a scientist at the John Innes Centre in England, who studies the life cycle of the parasite, which is called Aster Yellows phytoplasma.

The plant’s neighbors grow old, reproduce and die, but the phytoplasma’s eerily youthful host persists. It becomes something like a mix between a vampire that never ages and a zombie host whose body serves the needs of its parasite, namely, tempting sap-sucking insects to feast on the plant’s bodily fluids as long as possible. When the insects ingest the parasite, they spread it to new hosts, and the whole “Night of the Living Dead-meets-Dracula” cycle repeats.

How the parasite exerts such wide-ranging control is a subject of more than casual curiosity among scientists — phytoplasmas can cause destructive disease in crop plants like carrots. In a paper published in September in the journal Cell, Dr. Hogenhout and her colleagues reveal that some of these creepy alterations are driven by the work of a single protein from the parasite called SAP05, which stands in the way of the plant’s maturation.

SAP05 is not the first substance made by this phytoplasma that the scientists have linked to the symptoms it causes. The team sequenced the parasite’s genome some time ago and has pinpointed a handful of proteins that it may use to zombify its victims. But in the new paper, they explain how SAP05 seems to drive some of the more surprising effects, like the life-span extension.

It turns out that SAP05 binds to two groups of plant proteins that control the expression of genes used in development. Once it latches onto them, it causes them to be broken down by the plant’s own garbage disposal machinery. As a result, the plants appear frozen in time, unable to progress.

That makes sense, from the parasite’s perspective. If host plants were to mature normally, they would grow flowers and produce seeds, putting all of their energy toward making the next generation of plants. Before long they would drop their leaves and wither away.

“You can imagine that this situation is not a perfect situation for the parasite,” Dr. Hogenhout said.

Intriguingly, however, the scientists found that SAP05 attaches to a very specific piece of the cell disposal machinery to accomplish this goal. By tweaking the composition of that piece, they could radically curtail SAP05’s effects. Plants — in this case Arabidopsis thaliana, the diminutive mustard plant that’s a common lab model — with this modification did not grow into witches’ broom shapes, and they did not live longer than uninfected plants.

But that didn’t mean they were better off. Plants engineered to evade SAP05 had notably shorter lives when they were infected by the parasite. It seems that SAP05 may provide some protection against the stress of an infection, making it easier for the host to bear. Without that, the plant may be freer to continue its maturation, but it is also taking a greater hit from the disease than the zombie plants, which are more impervious to the parasite’s other effects. The zombies live on, protected by the organism that rides within them.

This control is likely exquisitely timed with the life cycle of the sap-feeding insects, Dr. Hogenhout said. After the insects feed on a plant, infecting it with the parasite, they lay eggs on it. At the same time that the parasite is taking over, the eggs are maturing.

When the young insects hatch, perhaps 10 days later, there is just enough time left in the plants’ extended life span for them to feast heartily on their juices before taking flight. Along for the ride will be their good friend, the phytoplasma.

These Singing Lemurs Have Rhythm

Are Vaccine Boosters Widely Needed? Some Federal Advisers Have Misgivings