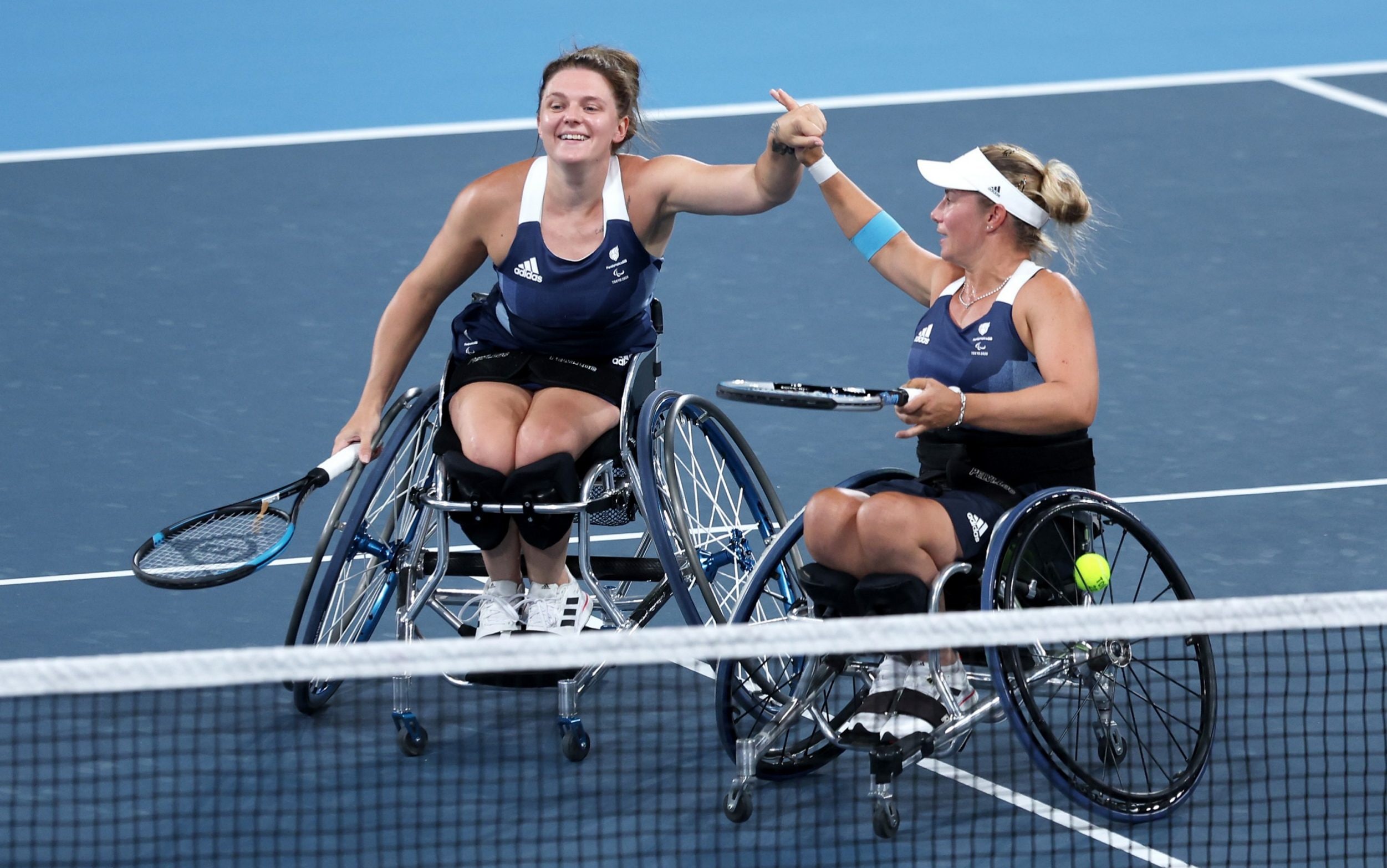 Jordanne Whiley and Lucy Shuker will be in action after the women’s doubles bronze match has finished and what a match it is turning into!

Japan’s Kamiji and Ohtani took the first set over China’s Wang and Zhu and they had several medal points. However, China have done well to push the second set to a tiebreak!

All the wheelchair tennis at this Games has been thrilling to watch.

Ryan Cockbill was eliminated by a shoot-off and so Jeffery is ParalympicsGB’s last competitor in the event.

By Molly McElwee in Tokyo

Hannah Cockroft continued her dominance on the track to win the seventh Paralympic gold medal of her career on Saturday, despite injuring her hand during the warm up.

The wheelchair racer’s final race at Tokyo 2020, the T34 800m, had a familiar sense of the inevitable about it as she cruised to a significant lead from the 200m mark and never looked in any danger of getting caught. Pumping her arms at what looked like double the speed of her competitors, the 29-year-old finished over 10-seconds ahead of team-mate Kare Adenegan in silver, for a new Paralympic record time.

But the ever-striving Cockroft remained a touch disappointed that her time fell one tenth of a second short of her world record.

The drizzly conditions and her hastily taped right hand, which she caught in her wheel during her warm up just 40 minutes before her race, had a part to play in that.

“I’m absolutely gutted,” she said, laughing post-race. “I was like 0.1 of a second off it. I couldn’t have got closer if I’d tried. I’m really happy with it. I’m obviously a bit frustrated I couldn’t quite squeeze under that time but to go close on a rainy day. I had a little accident in warm-up as well. So to come here with a gammy hand, I’m happy.

“I put my hand through the wheel, while the chair was moving. I’ve never done it before. Wheelchairs and rain don’t mix so I slipped off the rim and it went straight in. It’s pretty bloody but it’s fine. Even if my hand’s fallen off I was going to be on that start line.”

It means Cockroft successfully defended both her 800m and 100m titles in Tokyo, winning gold in both events at a third consecutive Games. For all her achievements on the track, she echoed team-mate and boyfriend Nathan Maguire in her wish that para athletics be given a more prominent space on the Diamond League circuit, outside of the Paralympics.

“Let’s get disabled events into able-bodied sport, like Nathan said, not just a token wheelchair race. Let’s get an afternoon before the able-bodied guys, because people are watching and inspired by what we do. We’ve obviously missed out on a crowd while we’re here, and that sucks because we only get a crowd every four years. We need to change that, desperately. We saw in London what a difference it makes – Kare watched me in London and she’s now here winning her fifth medal. As much as we’re shouting we need people to shout with us.”

British team-mate, T13 long jumper Zak Skinner was heartbroken to finish in bronze. European champion Skinner, who is the son of former Harlequins and England rugby flanker Mickey Skinner, was in the bronze medal position heading into the sixth and final round but American Isaac Jean-Paul bettered his best jump by two centimetres, relegating Brit’s best effort of 6.91 metres to outside the medals.

Jordanne Whiley will add another Paralympic medal to the bronze she won yesterday, but the colour of it will be determined shortly.

Whiley will take to the court with Lucy Shuker in the women’s doubles wheelchair tennis gold medal match.

They will compete against the Netherlands’ Diede de Groot and Aniek van Koot once the women’s bronze medal match is over.

Joseph Lane fought hard but he has lost to Libya’s Mohamed Abidar.

However, with the overall score 23-18 to Abidar, Lane bows out of the para-taekwondo.

Lane is just trailing 17-14 at the moment as the pair head into the third round.

Wow, Nagar was just phenomenal throughout that match.

He has taken the second set 21-11 to bag himself a final spot, Coombs will go for bronze tomorrow.

He is battling for this final spot.

Nagar still has his domination in this semi-final as he currently leads the second set 5-1.

Coombs now has an opportunity as he serves for the first time this set.

In the first set, he is lost 21-10 with Nagar in complete control of the match so far.

What’s happened so far and what’s to come?

Well what a morning for ParalympicsGB as they add six more medals to their tally to bring the total to 117.

The achievement was even more incredible as after the final she revealed she had an accident in the build up to the race.

She told Channel 4:  “I was a bit worried coming out – I had a bit of an accident in the warm-up, so my hand is not in great shape.

“That put me off a little bit but apart from that, I was 0.1 of a second off a world record, so I’m so frustrated! I wasn’t thinking too much about the time; I just wanted to get round.”

Cockcroft finished 11 seconds before any of her competitors, with her British team-mate Kare Adenegan taking silver.

Meanwhile, there was another GB one-two as Charlotte Henshaw took gold in the para-canoeing women’s KL2 with Emma Wiggs collecting bronze.

“It was a fantastic race and incredible that Emma and I were able to again get the top two steps on the podium. It just shows the strength that we have in British canoeing, and I’m very proud to be a part of it,” Henshaw told Channel 4.

The medals didn’t stop there in the sport as Laura Sugar won gold on her para-canoe debut in the women’s KL3. And Stuart Wood picked up bronze in the men’s VL3.

There are plenty more opportunity for medals throughout day 11, particularly in the athletics and wheelchair tennis.