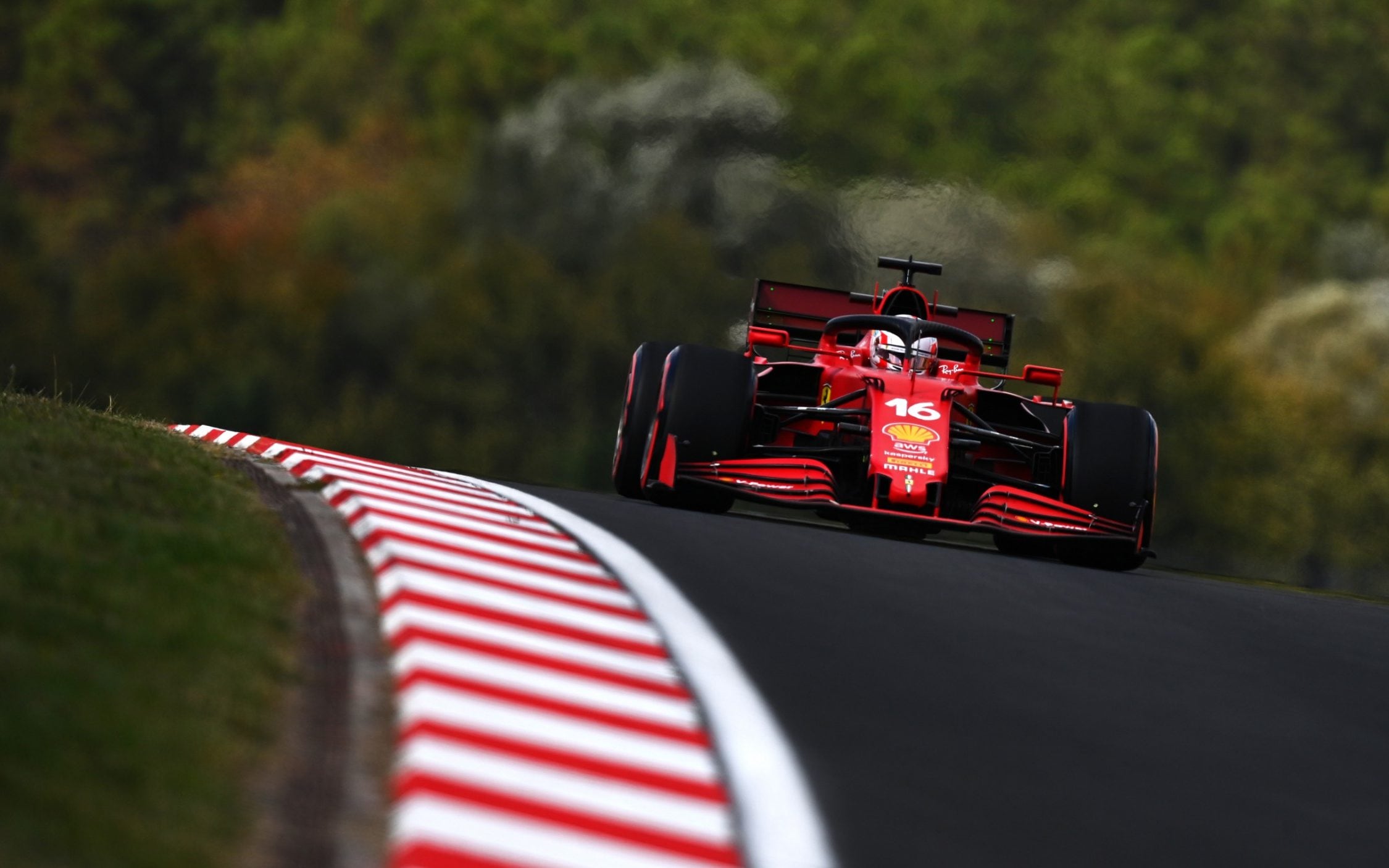 Now he and Verstappen are both within half a second of Hamilton. The only men who are.

Lando Norris, currently in sixth, has a new helmet for this weekend. Horrific.

But still a good four-tenths off Hamilton’s time. Hamilton will take a 10-place grid penalty for this race, remember.

FP1 – Verstappen not too happy with his car’s set up

Not much front end grip. Says it’s “worse than before”, assuming they changed something between runs.

The time is not all that impressive: 0.805s off Hamilton from the same compound of tyres. Hmmmm. Wonder if it’s laden with fuel. It certainly gave that impression…

Hamilton goes 0.412s quicker than his previous best after two sectors and ends the lap 0.261s quicker, losing a bit of time in the final sector. Improves his time and stays quickest. Now there is nobody within half a second of him.

It’s looking encouraging so far. How much quicker can he go?

He’s 0.181s quicker than his previous best in sector one…

FP1 – Fernando Alonso, in the other Alpine, now in fourth

Alpine tend to post a lot of ‘competitive’ times early in the weekend. Alonso on the medium tyres. Anyone especially standing out at the moment? Sainz is down in 20th but hasn’t really bothered with a competitive time yet, 11.8s off Hamilton’s quickest lap so far. Russell in the top 10 but that is not so much of a surprise these days.

On his fifth lap on this set of hard tyres he posts a 1:24.909, 0.398s off Hamilton. Good enough for second. He’s currently the only driver within half a second of the reigning champion.

FP1 – Bottas pops up in second

Still nearly nine-tenths off Hamilton’s time, though. Ocon back into third ahead of Verstappen. On the hard tyres, again. Don’t think he has used anything else yet.

With his seventh lap on the hard tyres. Okay, that’s interesting… Norris 0.058s off in second on mediums and Hamilton in third on the softs. Verstappen is going again on a fresh set of soft tyres.

Not bad. Has been a decent season for Ferrari, though Leclerc has been pegged back in recent races by Carlo Sainz, who has been impressive.

A mixture of tyres in use at the moment but Lando Norris has just set the quickest time of all on the medium tyres, but then Hamilton beats that by nearly half a second on the soft tyres.

A time just 0.018s quicker than Leclerc. Gasly now in his customary early third slot 0.2s off the pace, ahead of Norris, Ocon, Bottas and then Giovinazzi.

Verstappen is out within the first 10 minutes of the session in his newly-liveried Red Bull.

FP1: Leclerc with the fastest time so far

Off we go! No wheels or tyres on Verstappen’s car so he’s not going out at the start. He never does…

Last year it was very damp in Turkey during race day

A small chance of showers on Saturday and Sunday, but looks like it might be fine. Mind you, we thought that for the Russian Grand Prix a couple of weeks ago.

Just under 10 minutes until the green light for first practice

The biggest question that needs answering is whether Lewis Hamilton has had a new power unit fitted (or new component parts of the PU) and will thus will end up with a grid penalty. It’s possible and will probably happen at some point this season. But today? We wait to see.

Mercedes edging ahead a little bit. Red Bull kind of need Sergio Perez to pull his finger out. He had a decent race in Sochi but was unlucky with the rain and a few other things.

Not much in it, is there?

In other Red Bull/Honda news…

Red Bull and Honda said on Thursday they will work together in the wider world of motorsport after the Japanese manufacturer pulls out of Formula One as an engine supplier at the end of this season.

The collaboration will include young driver programmes and other racing activities as well as marketing and branding.

Red Bull have set up a powertrain company to use Honda’s intellectual property from 2022 to provide power units for their main Red Bull Racing Formula One team and Italy-based AlphaTauri.

Honda will assemble the units and provide trackside engineering support and race operation assistance from Japan until Red Bull take over all engine manufacturing and servicing from 2023.

“I’m glad that we have reached an agreement with Red Bull Group covering all the details of the IP rights for the F1 Power Unit and in this way, Honda can still contribute to the motor racing world,” said Honda’s Koji Watanabe.

“We are now working hard to strengthen HRC’s (Honda Racing Corporation) structure, so that it can ensure our fans will be able to continue to enjoy Honda’s role in all types of motorsport.”

Red Bull are running a special livery this weekend

This slot on the calendar should have been the Japanese Grand Prix, Honda’s home race, but F1 is in Turkey instead, so the special white (Honda’s corporate colours) edition will have to do. I think it looks decent, though think I’d have removed the yellow so it was more white and red.

Lewis Hamilton has said he does not expect to start Sunday’s Turkish Grand Prix from the back of the grid.

Hamilton’s Mercedes team are weighing up whether to hand the Briton a fourth engine here – one more than is permitted – with doubts over reliability.

Such a move would see Hamilton, who leads Red Bull’s Max Verstappen by just two points in the world championship standings with seven rounds left, penalised and thrown down the order.

Mercedes team principal Toto Wolff admitted that a fresh engine is on the table – but speaking on Thursday, the seven-time world champion said: “At the moment I still have number two and three engines available.

“I don’t envisage us having to take the penalty at the moment but that could change.”

Verstappen was penalised at the last race in Sochi after taking on his fourth engine of the campaign.

But the Dutchman managed to limit the championship damage with a fine drive from last to second.

Hamilton claimed his landmark 100th win to move back ahead of Verstappen in this season’s see-saw title battle.

Hamilton, who arrived in the paddock wearing a kilt fresh from attending Paris Fashion Week, insisted he is not feeling the championship heat.

“I find it easy because I have these other outlets so I can blow off steam in different ways,” the 36-year-old said.

“The most important thing is to come back into the racing environment fresh, recovered, positive and I don’t really have any worries. I am able to arrive and just love doing my job.

“I’ve been doing this for a long time so I’ve found ways to get me on course and I know what can also put me off course. I know what makes me tick and I’ll stick to them.”

Reflecting on his century of triumphs, he added: “I went back to the UK, running around London, and people were shouting out ‘one hundred’.

“Everywhere I went people were super-supportive – in Paris, too. I wasn’t expecting it but it was nice to see.”

Verstappen is bidding to win his maiden title and Red Bull’s first since 2013.

But the 24 year-old has played down the pressure of fighting the sport’s most decorated driver.

“Winning the championship is not going to change my life,” he said. “For me there is not much to worry about.

“I know that my team does the best they can and they expect that from me, too. We are fully committed to make this success together but you cannot force things.

“You have to work hard and well together and we will find out at the end of the season where that puts us. But whether it is first or second, we don’t know.”