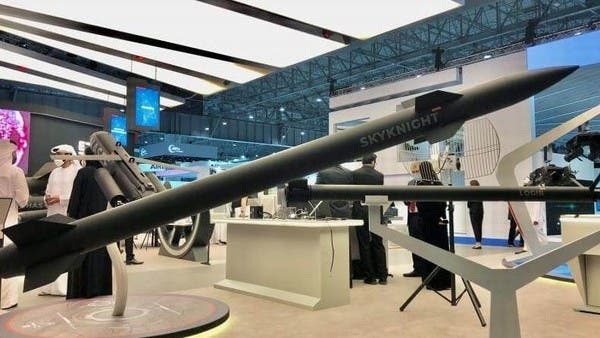 UAE’s state-owned weapons maker EDGE will conduct a second missile firing of its air defense missile system SkyKnight before the end of 2021, the company said on Sunday as it unveiled new drones.

EDGE, a $5 billion state defense conglomerate, made the announcement at Dubai Airshow 2021, where it showcased a SkyKnight naval launcher design and prototype.

CEO of EDGE Group entity, HALCON, Saaed al-Mansoori said: “The development of SkyKnight in its own right, and its inclusion in Rheinmetall AG’s Skynex air defence system are significant milestone developments for the UAE’s defense sector.”

EDGE’s mission is to supply the UAE’s armed forces with advanced weapons, with a focus on developing drones, unmanned vehicles, smart weapons and electronic warfare equipment.

The company was also awarded on Sunday an exclusive Performance-Based Logistics (PBL) contract to supply the UAE Air Force and Air Defense (AFAD) with maintenance, repair and overhaul (MRO), and specialized support services. The three-year contract is worth 11 billion dirhams ($3 billion).

QX-5 is a drone UAV designed for an extended endurance of 16 hours, with a 25 kg payload capacity. QX-6 is a drone designed to perform missions autonomously without the need for remote control, with an extended payload of 150 kg to enable it to deliver cargo to remote and inaccessible locations. It can be leveraged for both military and commercial applications.

HALCON unveiled the Hunter 10-Tube Launched drone, which features a take-off weight of 47 kg that can be fired from the back of an armored/artillery vehicle. It can carry a payload of 10 kg, flying at a maximum altitude of 2,500 meters. The drone is suitable for recon and attack missions.

New Covid variant cause for ‘concern, not panic’, Biden tells US