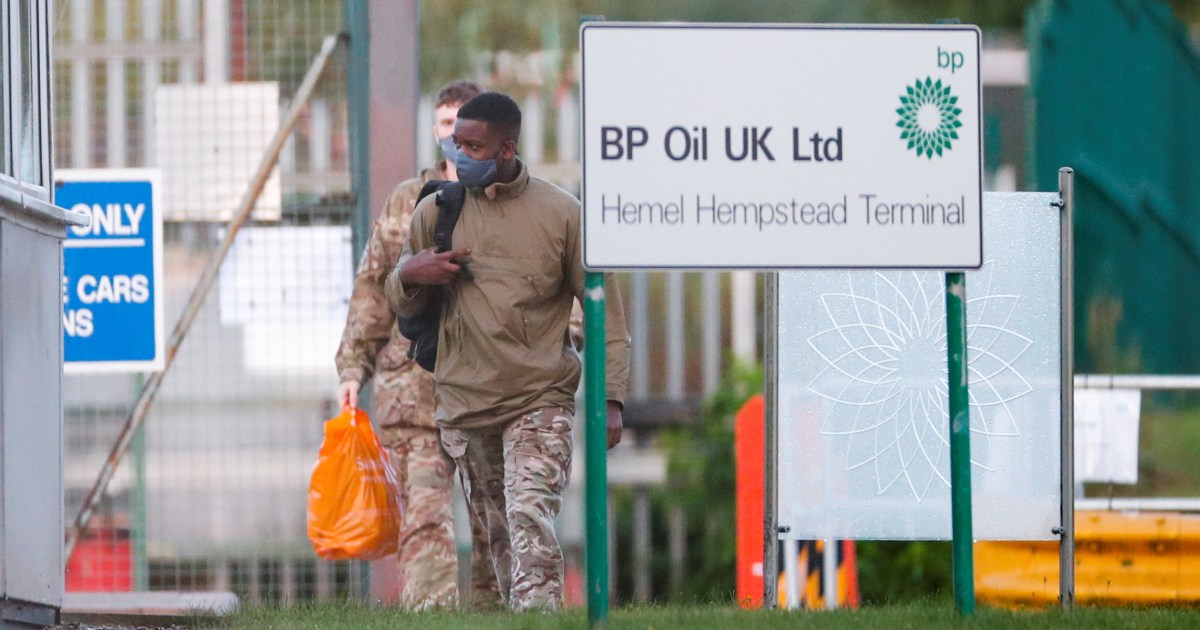 About 200 service personnel will help move fuel from depots to petrol stations as shortages persist in some areas.

British military personnel are delivering fuel to petrol stations, a bid to ease a supply crisis caused by a shortage of truck drivers.

About 200 service personnel, including 100 drivers, were deployed on Monday to help boost deliveries after undergoing training last week, officials said.

“Army drivers have gone out,” chancellor Rishi Sunak told LBC Radio. “People should know we’re doing everything we can.”

The United Kingdom is short of thousands of truckers because of the coronavirus pandemic and an exodus of foreign workers following the country’s departure from the European Union.

The shortage has impacted supply chains for everything from pork and petrol to poultry, medicines and milk, contributing to empty supermarket shelves and shuttered fuel stations.

The government has said that supply disruptions are easing after waves of panic buying.

“Every day, as the stats have come on, it’s getting better and, as demand settles back to more normal levels, the strong expectation is things will resolve themselves,” Sunak said.

Gordon Balmer, head of the Petrol Retailers Association (PRA), said the problem is particularly bad in London and southeastern England, where 22 percent of the group’s members are still without fuel.

The PRA represents about 5,500 independent fuel retailers, which account for 65 percent of all forecourts.

“Some of our members tell us that they have been without fuel for a number of days, some over a week now,” Balmer told Sky News on Monday.

British Prime Minister Boris Johnson told the BBC the UK would not return to “uncontrolled immigration” to solve the situation, but came close to acknowledging Brexit was a contributing factor.

Speaking to the broadcaster at his ruling Conservative Party’s conference in Manchester, Johnson suggested the challenges were part of a post-Brexit “adjustment”.

“The way forward for our country is not to just pull the big lever marked uncontrolled immigration, and allow in huge numbers of people to do work,” he said.

“So what I won’t do is go back to the old failed model of low wages, low skills supported by uncontrolled immigration. There will be a period of adjustment, but that is I think what we need to see.”

In previous weeks, officials had denied Brexit led to the crisis.