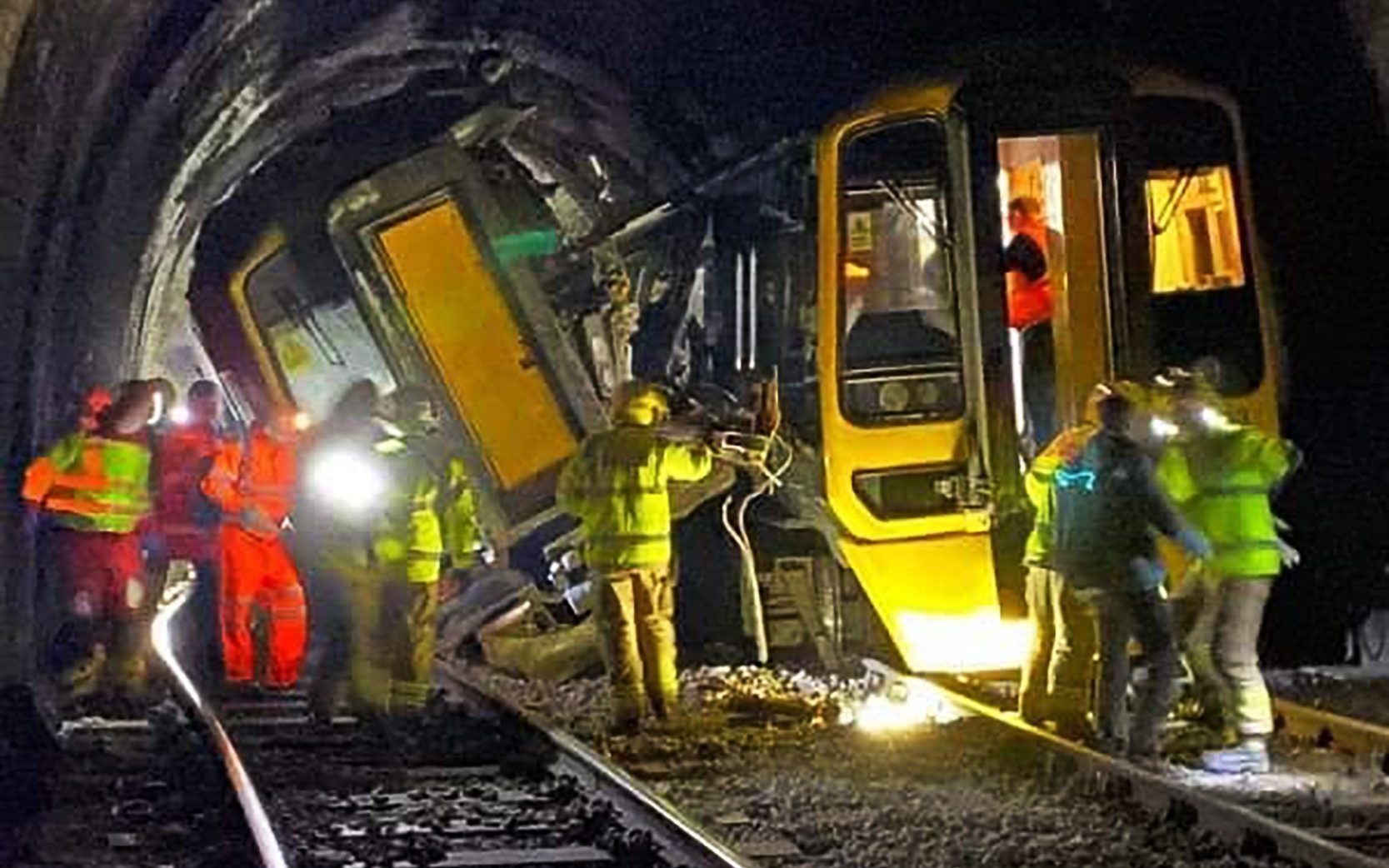 A critical incident was declared at the scene of the accident near Salisbury station and the line was closed as passengers were rescued from both services.

The collision reportedly hospitalised 17 people including a train driver who was trapped in his cab for a time.

Passengers on Sunday night spoke of being thrown from their seats after their carriage overturned.

Witnesses reported seeing “walking wounded” and a Network Rail spokesperson confirmed there were “reports of injuries”.

It is believed many of the injuries are minor. British Transport Police confirmed there had been no fatalities.

The crash happened at about 7pm when the rear carriage of the 17.08 Great Western Railway (GWR) service from Portsmouth Harbour to Bristol Temple Meads derailed after hitting an object as it left Fisherton Tunnel on the outskirts of Salisbury.

It was not immediately clear what the obstruction was, whether it had got on the tracks accidentally or had been placed there.

The derailed train “knocked out” the signalling and the 17.20 South Western Railway service from London Waterloo to Honiton ran into it.

Speaking from the scene on Sunday night, British Transport Police Inspector Mullah Hoque said “the line is expected to shut for some time”.

He said most of the people who sustained injuries were walking wounded but added “a small number, including the driver have been taken to the hospital where their injuries are being assessed”.

Reverend Andy Bousfield of St Mark’s Church,which was used as a casualty centre, said 120 train passengers were taken to the site, with some ‘visibly shaken’ and injured.

Pictures posted on social media appeared to show one train partially inside the tunnel with a carriage tilting on its side. A driver, presumed to have been in the second train, was trapped but was released shortly after 9pm and taken to hospital.

Fifty firefighters from the Dorset and Wiltshire Fire and Rescue Service were called to the scene with police and paramedics.

An emergency casualty centre was set up in a nearby church. A British Transport Police spokesman said: “A number of people have been injured, but thankfully no one has died.”

Peter Golden, 52, from Laverstock, near the crash site, said: “It sounded like something big collapsing – the sound of things falling into each other.

“With the windy day we’ve had I first thought it was a big gust of wind that has knocked something heavy over.”

He added: “Friends nearer have mentioned passengers being guided up to the ambulances on London Road, so walking which is good.”

A mother who was out trick or treating with her family nearby likened the noise of the train crash to “a bomb” and “thunder”.

‘It was a noise we’ve never heard before’

Tamar Vellacott said she was around a kilometre from the scene, adding: “It was a noise we’ve never heard before… my young ones started panicking thinking it was a bomb and we said maybe a lorry had crashed on the London Road and not to panic.”

Wiltshire Police confirmed it was responding to the crash close to London Road, Salisbury. “We are currently at the scene of a train crash involving two trains between Andover and Salisbury,” it said.

Two aircraft from the The National Police Air Service were also deployed to assist emergency services.

The last fatal crash in this country was at Stonehaven, near Aberdeen, when three people died as an express train derailed following a landslip.

Passenger Dimitri Popa, 17, who was travelling on the train from London to Sherborne when the crash occurred said:  “It all happened so fast… I was just sitting in the first carriage and there was a huge crash.

“Then I saw the flames and got pretty scared, and all the lights went out. The carriage was 45 degrees to the right.

“We didn’t know where we were or anything… we were all just so shocked.”

Sailor Morgan Harris, who was travelling from London Waterloo back to his base in Yeovil, said he was thrown from his seat due to the impact of the huge crash.

The 20-year-old Able Seaman said: “It was all going along normally then, all of a sudden, there was this massive bang and all of the lights went out.

“There were sparks and flames from where we had come off the track, and there was a load of ash coming from outside.

“Our train was on its side… I was thrown out of my seat and banged against the table.”

Grant Shapps, the Transport Secretary, said investigations into the crash would be undertaken in order to help prevent similar “serious” incidents in future.

“My thoughts go out to those affected by the serious rail incident near Salisbury,” he tweeted.

A Network Rail spokesperson said: “At around 7pm this evening, the rear carriage of the 17.08 Great Western Railway service from Portsmouth Harbour to Bristol Temple Meads derailed after striking an object on its approach to Salisbury station.

“The derailment knocked out all of the signalling in the area. Subsequently, the 17.20 South Western Railway service from London Waterloo to Honiton then collided with the Bristol train.

“There are reports of injuries and the emergency services are on site along with railway first responders.”

British Transport Police said: “We are currently responding to an incident at Fisherton Tunnel, Salisbury. Officers were called at 6.46pm this evening following reports a train derailed. We are on scene alongside paramedics and the fire brigade.”

Manuel Cortes, the general secretary of Transport Salaried Staffs Association, said: “We will have to await further details, but this is a very sobering reminder about why safety on our railways is always paramount.

“The thoughts of our entire union are with the loved ones of everyone caught up in what may well turn out to be a tragic event.

“No doubt that over the coming days and weeks we will find out why this accident happened. A full investigation will now need to follow.”