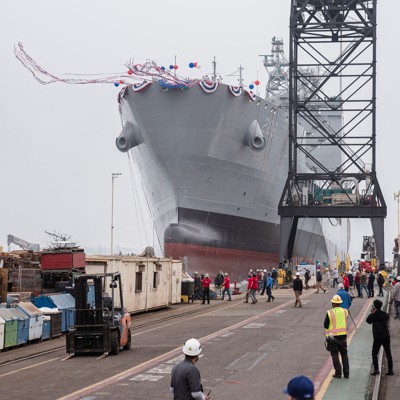 The findings of a study conducted by the conservative Ronald Reagan Institute arrive as supply chain meltdowns highlight the U.S. reliance on foreign-made items and the tired American infrastructure that brings them from ports to domestic assembly lines.

“Our declining manufacturing competitiveness leaves America’s economic infrastructure and defense capabilities underprepared for geopolitical events, global competition, and even major armed conflict,” the report states. “To revive our manufacturing base and maintain our edge as the world’s leading economy, the United States must employ innovative thinking from both the public and private sectors.”

But there’s no easy fix.

“One piece of legislation is not going to not going to solve this problem,” Rachel Hoff, policy director at the Ronald Reagan Institute, said in an interview Monday. “It really has to be something that’s taken holistically by the various key stakeholders in sustained effort over time.”

The report’s authors call on policymakers to spend more to train American workers, particularly in high-demand trades, and to allow high school graduates to use federal education grants to earn credentialed skills offered by employers.

The goal should be to bring 2 million “new or retrained workers into strategic manufacturing sectors by 2030 to address the critical skills gap in the current workforce, prepare for future manufacturing needs, and ensure a broad base of inclusive economic growth,” they write.

In 2017, the federal government spent $14 billion on job training and education, down from a peak of $20 billion eight years previously.

The report also calls for spending $100 billion annually on “plants, infrastructure, and related capabilities to accelerate the adoption of Industry 4.0 digital technologies and processes.”

Finally, it calls for more public-private partnerships to pay for improvements to domestic manufacturing sectors that are critical to national security.

“The federal government must develop the capability to work with private sector employers, as well as state and local governments, to provide liquidity and low-cost capital to critical domestic manufacturers and infrastructure,” the report states.

The report’s task force—chaired by former Lockheed Martin CEO Marillyn Hewson and David McCormick, a former Bush administration Treasury official who now runs the hedge fund Bridgewater Associates—also calls for an update to the Defense Production Act as well as deeper manufacturing ties between the U.S. and its closest allies. The panel included Republican and Democratic members of Congress and executives from non-defense firms including Walmart and Johnson & Johnson.

U.S. defense companies have increasingly reported supply chain disruptions, largely caused by the coronavirus pandemic, that are leading to delays in weapons manufacturing.

“I still see the U.S. defense industrial base as the strongest in the world” but “we can’t assume that that will be the case going into the future,” Northrop Grumman CEO Kathy Warden said Monday at a Brookings Institution virtual event.

“All of these are issues that are not foreign to the defense industry and to me and my peers,” she said. “But these are things that we have to work to address to just remain at parity with other nations—let alone to be able to work at speeds that are faster [than] them and deliver capabilities that are greater than what other nations are able to produce for their governments.”

With T-7 on the way, why is ACC eyeing a new trainer?

Face of Defense: From Army ‘Brat’ to Space Force Guardian