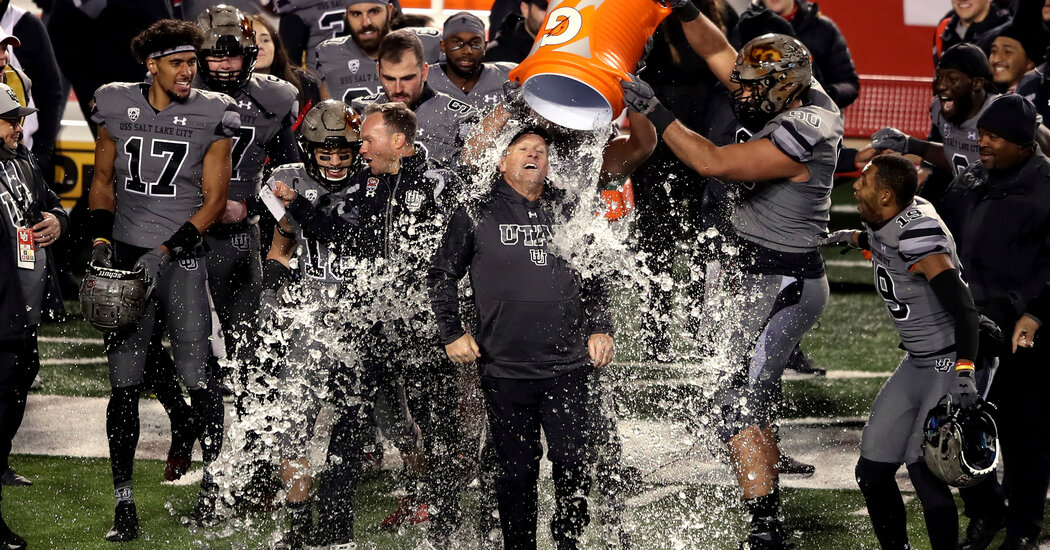 “Please do not rush the field,” he said. “We ask that you celebrate safely in the stands.”

They will learn their team’s ranking, which will surely climb, on Tuesday evening, when the playoff selection committee will announce its latest whims. Besides the fallout from Michigan State’s spectacular collapse in Columbus, the committee will be wrestling between now and then with where to place a second-ranked Alabama team that has lately done more surviving than thriving.

And what of Cincinnati, the fifth-ranked belle of the American Athletic Conference, a Group of 5 league, that stomped on Southern Methodist, 48-14?

The playoff race will gain some clarity late this week, when rivalry games will threaten teams across the country. But, with a possible playoff expansion still years from taking effect and the harsh history that no two-loss team has reached a semifinal, the Pac-12 and the Atlantic Coast Conference are effectively out of the hunt already.

The A.C.C., at least, has been a playoff fixture. The Pac-12 has not placed a team there since 2016, and the conference’s great prize will, once again, at most be a Rose Bowl win.

“This season has been all over the place: I think we have the best out-of-conference win at Ohio State, and I think we took some losses out of conference that we should never take,” George Kliavkoff, the Pac-12 commissioner, said in an interview in Salt Lake City on Saturday.

“It’s frustrating, and I’m hoping for more consistency out of all of our teams going forward,” he added, “and I’m particularly looking forward to those teams in our league that are going to have the opportunity to attract some really great coaches.”

With the benefit of hindsight, will Ganguly support Virat?