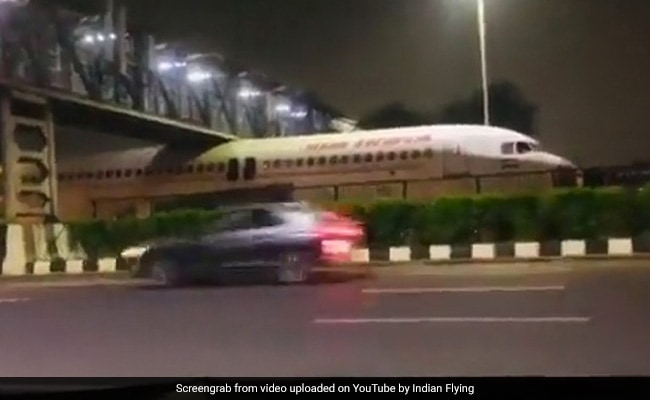 A scrapped Air India plane was filmed stuck under a bridge in the National Capital Region.

An Air India plane stuck underneath a foot overbridge has become the talking point on social media. Footage that has gone massively viral online shows the aircraft wedged under a bridge near the Delhi airport. The scrapped airplane, which did not have wings, was reportedly being transported when it got stuck on the Delhi-Gurugram highway.

The airplane did not block all traffic on the route. In the video, vehicles can be seen passing on one side of the highway, while the other side appears to be largely blocked by the plane.

The video has been watched and shared thousands of times on social media and over messaging platforms like WhatsApp, with many wondering how the aircraft managed to get stuck in the first place.

In a statement that Air India shared with ANI journalist Ashoke Raj, the airline said the aircraft had been deregistered and sold off. It was being transported by the buyer on Saturday night when it got stuck under the foot overbridge.

“This is a detegistered scrapped aircraft of Air India which has been sold off,” the statement read. “This was transported last night by the party. Air India has got no connection whatsoever with the aircraft under any circumstances.”

Statement:
This is a detegisteted scrapped aircraft of Air India which has been sold off. This was transported last night by the party. Air India has got no connection whatsoever with the aircraft under any circumstances: @airindiain

A Delhi airport official also confirmed to Times of India that the aircraft did not belong to the airport’s fleet.

“The aircraft certainly does not belong to the Delhi airport’s fleet and in the video, it is being transported without any wings. It appears to be a scrapped plane and the driver may have made a judgement of error while transporting it,” the official said.

This is, surprisingly enough, not the first time that passersby have been left puzzled by the sight of a plane stuck on a road.

In 2019, a truck carrying an abandoned India Post aircraft got stuck under a bridge in West Bengal’s Durgapur.