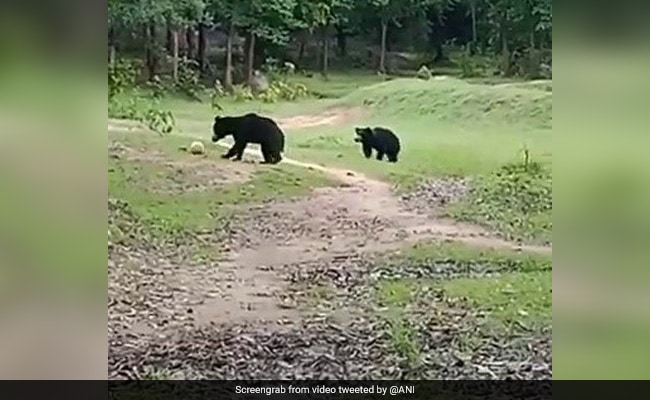 Two bears were filmed playing with a football in an Odisha village.

Footage of two wild bears playing football, captured in Odisha, has gone viral on social media. The video shows the two curious animals examining the football, picking it up with their mouths and tossing it in the air as locals cheered in excitement at the unusual sight. The incident was filmed in the village of Sukigaon in the Umarkot area of Nabarangpur district.

The bears reportedly appeared at the scene while some locals were playing football. As the athletes left their ball behind while hurrying away from the spot, the bears picked it up and proceeded to have a game of their own. One of the two bears was filmed pawing the football and repeatedly picking it up with its mouth. In the background, locals were heard cheering and clapping during this one-of-a-kind football match. The incident was filmed on smartphones by the locals, who stood a short distance away.

The two bears eventually vanished into a thicket of trees with the football. Watch the video below:

“It is an animal instinct. They examine & try to find out the nature of any object that they find for the first time,” the DFO said on Monday.

Video has been viewed thousands of times on Twitter, where many praised the animals for their athletic talent. “Messi and Ronaldo,” one Twitter user designated the two bears, while another said, “Excellent hidden talent.”

In an interview with news agency ANI, the Divisional Forest Office said that the bears were displaying natural animal instinct when they examined the ball – an object which the animals had probably never seen before.

“It is an animal instinct. They examine and try to find out the nature of any object that they find for the first time,” the DFO said on Monday.